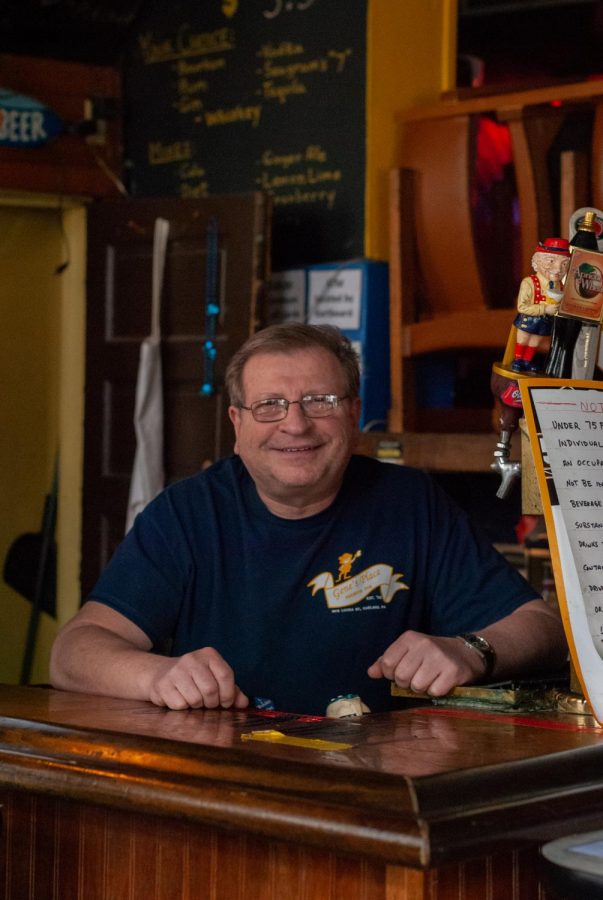 Gene Ney runs Gene’s Place — a bar located on Louisa Place. Ney has only sold takeout cocktails, drafts and other specials for the past few months, but on April 4, he plans to open the bar again at a limited capacity.

With continued restrictions and less students on campus due to the ongoing COVID-19 pandemic, bars and restaurants in Oakland have had to adapt in a number of new ways.

Bars have been changing their operations for more than a year now. Takeout cocktails and beers are one strategy allowing businesses to stay open, since they can’t seat anyone at the bar without serving food. Gov. Tom Wolf announced that beginning April 4, alcohol service in bars and restaurants will be allowed without the purchase of food, and indoor dining capacity will be raised to 75%.

Gene’s Place, run by Gene Ney, is located on Louisa Place. Ney has only sold takeout cocktails, drafts and other specials for the past few months, but on April 4, he is planning to open the bar again at a limited capacity.

“Business is a fraction of what it used to be and we’ve been doing takeout because in order to have people in here, you have to have food,” Ney said. “Unless something changes, I expect we’ll be open at 75% capacity [on April 4].”

Besides running Gene’s Place, Ney is a part-time professor at Carlow University. Ney purchased the bar in 2004 and has been running it ever since.

“I live off my teaching salary,” Ney said. “I’ll have nights where I sell less than $30, I have nights I do better than that.”

Ney said business during the pandemic has varied, but more people have been coming in now that they are vaccinated.

“It’s been hit and miss,” Ney said. “I think there is an upswing. This semester in general, people just have a more positive outlook. And I feel like there’s light at the end of the tunnel.”

Even after partially opening the bar again, Ney plans on continuing his takeout drinks and signature growlers — a mason jar filled with beer that can be returned and refilled.

“I think it really forced us to innovate and to realize there are certainly other places that sell to-go cocktails and beer, but we were able, through our bar manager, to develop a really great curated beer list. The beers that we carry on our shelves, you won’t find all of these in one place,” Randall said.

Randall said he thinks the cocktails have succeeded because people want to have the feeling of dining out and having others make your drinks, rather than making them at home.

“Everybody’s a little bit sick of their own cooking and I think we all miss that feeling of being together and having someone else take care of the details,” Randall said. “Maybe you don’t keep a full bar at home and the notion that you only need a spritz of something to make a cocktail feel special is not going to spur you to go out and buy a bottle of absinthe. Having someone else be able to do those extra special little details has very much survived.”

Randall said he has noticed more and more people coming in for takeout and that he hopes they can return to dine-in soon. The staff plan to take time off at the beginning of April and then work toward dine-in options when they return.

“We’ve already seen a pretty solid increase in foot traffic just having students back,” Randall said. “I hear stories every single day about how we have been effectively catering dinner parties people are having with their vaccinated friends.”

Hemingway’s, located near Towers on Forbes Avenue, has been closed since last spring, but is opening once again on March 31. John Elasky, the owner, said he too is excited to interact with students again and is currently working on building up his wait and bar staff.

“It’s been a year,” Elasky said. “We’re going to open at a limited capacity, and go from there. I’m hoping by fall, things will be back to normal. We’re not doing anything new, but I just don’t know what to expect. We’re taking it real slow for the first few weeks for sure.”

Elasky said students are glad the bar is reopening and have been knocking on the door and calling. He added that many people have told him to try doing takeout food and drinks in order to stay open, but he decided not to.

Ney said Gene’s Place and other bars depend on Pitt students for business and that he’s thankful for their continued patronage. With students hopefully returning to the bar on April 4, Ney said he’s very excited to have people back and regain some normalcy.

“We’re going to continue to follow whatever guidelines and policies we need to,” Ney said. “I really appreciate and thank all the University of Pittsburgh students who have supported me over this COVID period. I hope they continue to support me as we open up and I hope they support the other bars here in Oakland, too. We have a lot of nice bars and it’s important to support them. There’s no such thing as a bad bar in Oakland, just different types of good ones.”