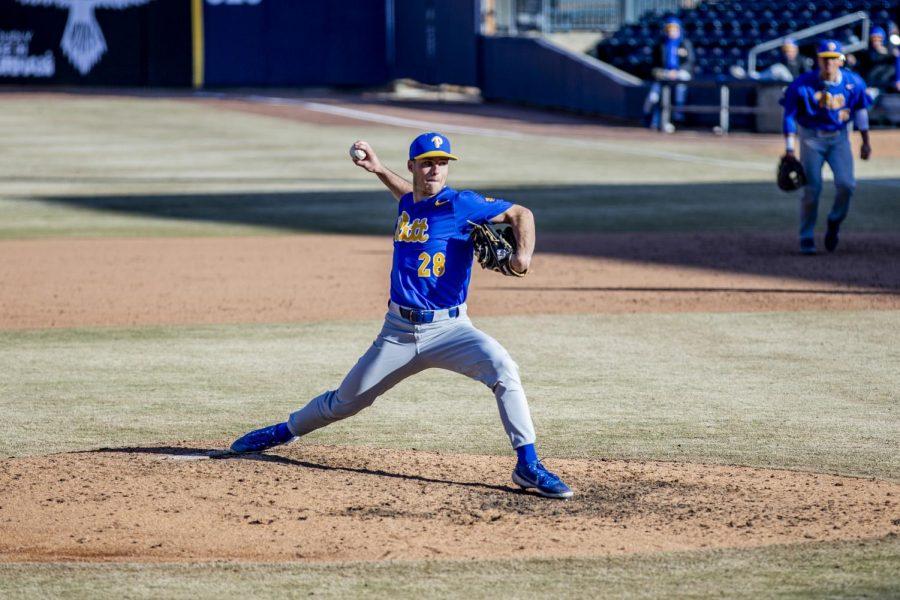 Jordan McCrum is a senior relief pitcher for Pitt baseball. McCrum transferred to Pitt from Monmouth University last year after undergoing Tommy John surgery, which entails reconstructing the ulnar collateral ligament within the elbow by replacing it with a ligament from elsewhere in the body.

Pitt senior relief pitcher Jordan McCrum leaned in, picked up his sign from the catcher and came to a set.

He reared back and delivered a fastball on the upper outside corner of the strike zone. The umpire called the pitch strike three with an emphatic punch-out behind the plate and the Panther dugout erupted — McCrum let out a roar in the heat of victory as his teammates climbed over the dugout railing and stormed toward him.

McCrum was tasked with finishing off the No. 9 Florida State Seminoles in a closely contested 1-0 game and he delivered, earning his first collegiate save after almost two years away from the game of baseball.

Months of rehabilitation and training went into this vindicating and long-awaited moment in Tallahassee. McCrum went into his fourth season with the Monmouth University Hawks in 2019, but he pitched in just three games before receiving devastating news.

After being sidelined with elbow discomfort early in 2019, doctors told McCrum that he would need to have a procedure that many pitchers don’t return from — Tommy John surgery. This procedure entails reconstructing the ulnar collateral ligament within the elbow by replacing it with a ligament from elsewhere in the body.

Yet McCrum refused to let this setback end his baseball career.

After undergoing the surgery on April 1, 2019, McCrum went through rehab as he watched his Monmouth Hawks skid to a 27-29-1 record that year. Despite the Hawks’ struggles, McCrum remained determined to return with his eyes set on 2020, committing himself to the long rehab he needed in order to return to his former self on the bump.

His teammates saw the hard work he put in to return to the hill — despite not being able to pitch on opening day for the Hawks in 2020, his teammates named him a team captain. Trey Dombroski, a teammate of McCrum’s at Monmouth, gave high praise for McCrum and said his work ethic set a great example for younger players like Dombroski.

“Jordan is the hardest worker I’ve ever seen. No matter who you are, you are going to admire the work and dedication he puts in,” Dombroski said. “He is the perfect role model for any player.”

McCrum sat on the brink of returning to his Hawks in 2020, until the NCAA canceled all spring sports due to the COVID-19 pandemic. With much uncertainty regarding his future eligibility, McCrum thought he may have thrown his last pitch and the rehab would have been fruitless — taking a toll on him mentally.

“The worst part was not knowing if I’d get the year of eligibility back,” McCrum said. “My first thought was that could be the end of my career. It was really hard.”

Fortunately for McCrum, the NCAA granted all spring athletes an extra year of eligibility — meaning that he would have the opportunity to toe the rubber for at least one last season. After spending five years at Monmouth University, McCrum opted for a change of scenery, transferring to Pitt to compete with the nation’s best in the ACC.

“I enjoyed my time at Monmouth, I probably wouldn’t have stayed five years if that wasn’t the case,” McCrum said. “But ultimately it came down to playing in the ACC and playing against some of the best competition in the country. That’s something I’ve always dreamt of. I wanted to see what I had at the next level.”

It’s safe to say the transfer to Pitt has paid off in a big way for both parties.

McCrum returned to the mound on Feb. 21 — 692 days after undergoing Tommy John surgery — this time with the Pitt script across his chest. He came into the game against Indiana State in relief and pitched one inning without allowing a baserunner, tallying one strikeout in a 10-1 victory, and he hasn’t looked back since.

McCrum has established himself as the closer for the Panthers with a team-leading three saves — all coming against ACC opponents ranked in the top 10 at the time, with one against No. 7 Georgia Tech and the remaining two versus No. 9 Florida State.

Pitt head coach Mike Bell has displayed a great deal of confidence in McCrum, calling his number in multiple high-pressure moments nearly every weekend. Coming into a March 7 game against ACC rival Duke with the Panthers down 3-4, Bell tasked McCrum with holding the Blue Devils from scoring for 2.1 innings and giving his offense an opportunity to take the lead — and deliver he did.

“We pitched out of a situation with Jordan McCrum,” Bell said. “Jordan did what he’s been doing. He filled up the zone, allowed us to play defense behind him.”

McCrum held a stout Blue Devils offense to just one hit and no runs, allowing the Panther offense to rally from behind and take the final game of the series against Duke 5-4. McCrum said he felt Bell’s management in that game proved the faith he had in his closer.

“To have that trust from the coaching staff is definitely pretty cool,” McCrum said. “I don’t take that trust lightly at all. I’m trying to help my team win games. And when you come in a spot [to close the game] you’re trying to work out of situations to help your team win.”

These are the situations that McCrum transferred for — he wanted to prove he could not only compete alongside the nation’s best but dominate them, which his numbers have supported thus far.

Opponents own a measly 2.6 hits per nine innings pitched against McCrum. His ability to dial up his fastball and a lethal combination of off-speed pitches have led to a great deal of success in his first season back. He has been nearly untouchable, registering 16 strikeouts in a mere 10.1 innings of work while surrendering just one earned run and three hits — when McCrum takes the hill in the ninth, opposing teams have not stood a chance.

McCrum refuses to take all of the credit for his success this year, thanking his teammates for putting him in the position to close out ball games. McCrum cited a 13-inning, 9-7 comeback victory against Florida State as an ultimate team accomplishment where the offense set him up to get the save.

“It was a great team win,” McCrum said. “We pitched great all weekend, and the lineup really sparked us and helped us come back on that game on Sunday. It was really cool to see the team come together and put together a really good series against a good team like Florida State.”

While it may have been a great team effort in the series sweep of Florida State, these games felt special for McCrum — he proved he hadn’t lost a step since his injury.

“This weekend I was pretty focused on winning the series,” McCrum said. “But I’ve definitely been able to look back and realize how big of a moment that was. Seeing all of that hard work of the last two years pay off was definitely really satisfying.”

McCrum has been a key piece to the team’s historic run to start the 2021 season. The Pitt baseball program has gotten off to its best start since joining the ACC in 2011, ranked in the top 25 for the first time in eight years. The ACC Coaches Poll projected the Panthers to finish dead last in the Coastal division, making the recent success surprising to many. But McCrum said the victories over the ACC’s best have not come as a surprise to the team itself.

“You have it in the back of your mind that nobody is really giving you a chance. The thought is there, but we know we can compete with anyone,” McCrum said. “We’ll leave all of the reporters and the guys on social media to put those rankings up there, but at the end of the day we’re just here to win ball games.”

While the recent performances have excited McCrum, he said the Panthers haven’t come close to their full potential.

“We’re still hungry for more,” McCrum said. “We definitely think we’re one of the best teams in the conference, if not the country. We’re hoping to have a special year, but we’re just taking it one series at a time.”

Going forward, McCrum is just focused on helping his team win ball games, and he said he’s taking it one game at a time before looking ahead any further into the future. McCrum and the Panthers look to keep their momentum rolling on Wednesday in their home opener against Bucknell and this weekend when facing ACC opponent Virginia Tech.