Review: Bob Odenkirk plays against type in action-packed ‘Nobody’ 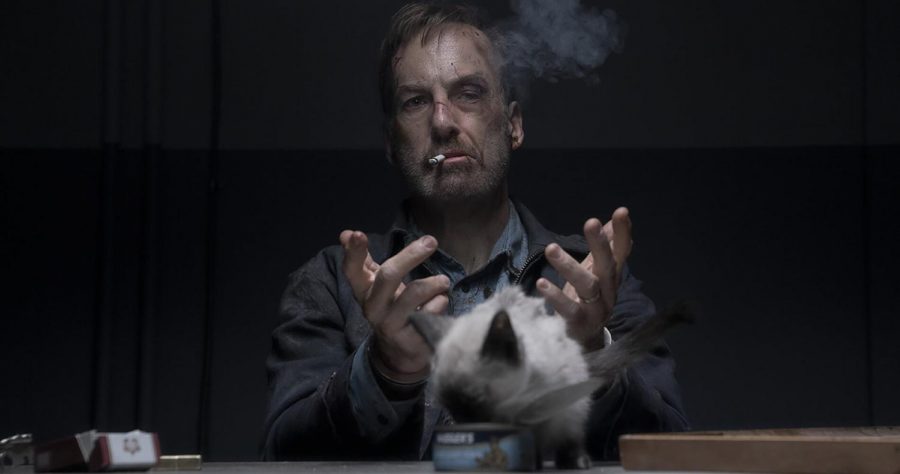 It’s a routine that feels all too familiar for most people — wake up, make a cup of coffee, run a little late, head to work.

Bob Odenkirk’s new movie, “Nobody,” opens with such a montage, introducing us to Hutch Mansell, the titular father-of-two everyman who lives out his life in suburban ennui. Odenkirk stars as Mansell, whose nine-to-five life is disrupted after a home break-in forces him to reconsider his role as a father, thrusting him back into the life of violence he once lived. The film will hit theaters Friday.

Directed by Ilya Naishuller, “Nobody” follows a generic action-movie plot — after a break-in leaves his family rattled and Mansell disappointed at his inaction, he takes matters into his own hands, set on taking revenge and reclaiming some agency. After a brutal takedown of a group of men on a bus, he finds himself in the midst of a crime ring, incurring the wrath of Russian mob-boss Yulian Kuznetsov, played by Alexey Serebryakov, and tapping into some dark secrets from Mansell’s former life.

It’s a classic old-guy-turned-badass-warrior tale, reminiscent of the recent pedigree of post-“Taken” films. But for Odenkirk, best known for his recurring role as sardonic lawyer Saul Goodman in “Breaking Bad” and Jimmy McGill in its spinoff, “Better Call Saul,” it’s a notable role, marking his first foray into the action genre.

The Pitt News had the opportunity to interview the actor about his upcoming film as part of a virtual roundtable. Odenkirk got his start as a comedy writer, collaborating alongside David Cross on the sketch-comedy show “Mr. Show” for three years. But as he began to play more dramatic roles, like in Better Call Saul, Odenkirk said he felt the need to expand even further past his comfort zone.

“Until I played Jimmy McGill, I had not done much on screen that was not ironic or sarcastic or a comical take on emotional moments,” Odenkirk said. “I thought, ‘I’d played that as Saul, and that’s how people knew me, and if I could build off that, it would be a neat trick and a weird, f——up, crazy magic trick to do action and pull it off.’”

Beyond being an exciting acting venture, “Nobody” was also somewhat of a personal film for Odenkirk. He said the idea for the movie came after a series of break-ins at Odenkirk’s house, which led to him pitching the idea to screenwriter Derek Kolstad. Like his character in the movie, Odenkirk was presented with a decision — minimize damage and comply peacefully, or fight back in hopes of stopping the intruders. Odenkirk said he chose the former.

“I tried to keep damage to a minimum. And I left that incident feeling doubtful that I’d done the right thing, even though I had done the right thing. It lingers to this day, that I’m not sure that was exactly right,” Odenkirk said. “And I thought I’d use those feelings and I shared that with Derek Kolstad, and he built the story from that.”

Following the idea for the movie came the physical preparation necessary for the high-octane action flick Odenkirk and Naishuller wanted to craft. Odenkirk embarked on an intense physical regimen with fight coordinator Daniel Bernhardt for two and a half years, all in preparation for the intense stunts and fight scenes in “Nobody” — most of which Odenkirk did himself. Odenkirk said working alongside stuntmen and trainers behind action blockbusters such as “Atomic Blonde” and “John Wick” made him want to give it his all.

“I didn’t need to do an action movie just to do it. I wanted the full experience,” Odenkirk said. “I wanted to push myself.”

Odenkirk’s dedication to training pays off in the film, with the fight scenes delivering on all kinds of striking choreography. Mansell’s haggard, world-weary demeanor explodes into rageful vengeance once provoked. In one scene, after getting pummeled, stabbed, sliced and thrown, Odenkirk’s character gets up and walks back to his foes, deliriously inviting more pain with a crazed look in his eye. Although the film takes a lighter approach toward Mansell’s brutal fight scenes, Odenkirk said that he and Naishuller discussed his character’s dependent relationship to violence.

“While he’s the hero and it ends in a triumphant, rewarding place, llya Naishuller said, ‘Your character, Bob, is an addict — he was addicted to violence and he quit cold turkey.’ And that’s not always the best way to quit something,” Odenkirk said. “And then when he goes back in he’s unhinged. He has a very good moment when he can walk away.”

Odenkirk’s character routinely walks the line between masochistic executioner and heroic public defender. Mansell is a family man, and his return to a world of violence seems to make him happier — his marriage is stronger, and his kids are closer to him. But that sense of peace doesn’t stay for long, and Mansell ends up threatening the lives of his family. Odenkirk said this paradox of violence is something that he incorporated into his performance.

“When he does express his rage, he creates more trouble for him than if he found a different, healthier way to deal with those feelings,” Odenkirk said. “He actually puts his family in real danger because he allows his rageful instincts to play out and come out.”

Despite some of the darker hints of Mansell’s character, “Nobody” is overall a light-hearted movie, balancing brutal violence with extravagant set pieces and improbable gunfights. At its center, though, Odenkirk said he considers the movie to be about Mansell’s decision to exert some agency or continue to live out his mundane existence.

“He’s the one who has to prove it to himself. He’s forgotten and isn’t sure if he’s still a powerful individual,” Odenkirk said. “And he wants to prove that to himself — or die.”