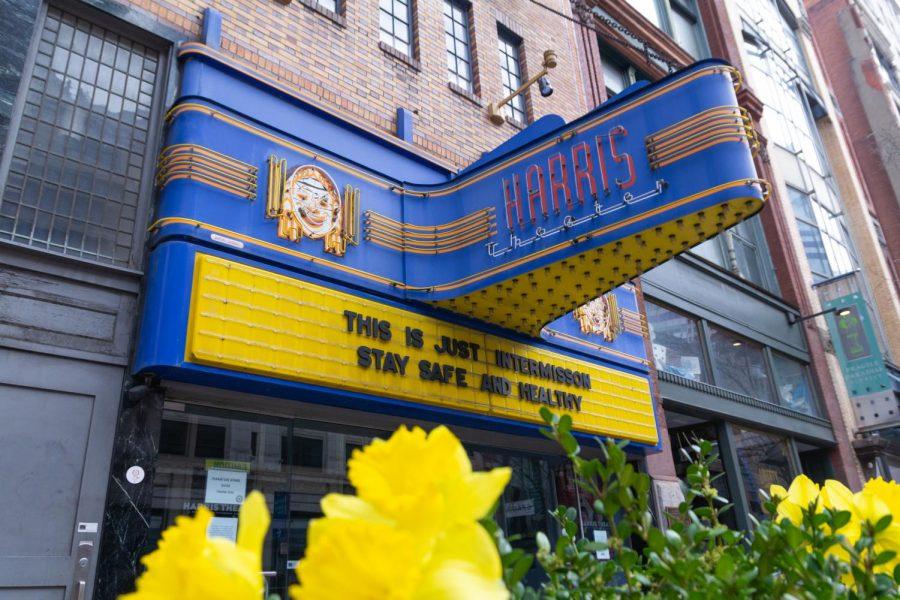 Pittsburgh is home to many theater companies, such as Harris Theater, that had to stop production when COVID-19 was first declared a pandemic and Gov. Tom Wolf ordered a statewide shutdown. This shutdown forced the companies to halt their public shows and find new ways to bring theatre to their audiences.

The World Health Organization declared COVID-19 a pandemic on March 11, 2020. In the days following this announcement, universities, businesses and cities around the world began to shut down their arts scenes.

Pittsburgh is home to many theater companies and venues, including Pittsburgh Public Theater, Harris Theater, City Theatre and Pittsburgh Shakespeare in the Parks, that had to stop production when COVID-19 was first declared a pandemic and Gov. Tom Wolf ordered a statewide shutdown. This shutdown forced the companies to halt their public shows and find new ways to bring theater to their audiences.

Lou Castelli, managing director of Pittsburgh Public Theater, explained that when the company heard the news of the pandemic, they decided to close last March before their opening night.

“It was Thursday, March 12 of 2020 and we were supposed to have our official opening night Friday, March 13,” Castelli said. “And Marya [Sea Kaminski, artistic director of Pittsburgh Public Theater] and I went to the greenroom to speak with the company immediately following the performance that evening and letting them know that the production was going to need to close that night, before it officially opened.”

In the weeks leading up to the pandemic declaration, it was slowly becoming more clear that COVID-19 was going to affect the United States, but Castelli said he felt many at the time did not foresee the extent of COVID-19’s impact.

“Everyone was somewhat stunned even though we knew the pandemic was starting to have an impact beyond what anyone had thought even the week before,” Castelli said. “Things really escalated quickly and we joined with every other performing arts organization in the City and across the country in doing the right thing, which was closing our doors for in-person performances.”

The shutdown meant theater companies could not produce shows and had to furlough or lower the salary of employees until more funds could be secured, explained Joel Ambrose, director of ticketing and patron services at City Theatre Company.

“By the end of March we had also furloughed 90% of our staff,” Ambrose said. “We were down to seven of us who were working full time, salary positions we had all taken a decrease in salary for about three or four weeks. We were able to secure a PPP loan to bring back most of our staff.”

Although the doors to the theater were closed, Ambrose said through digital media, the company brought several shows, that were in the midst of production when the shutdown began, to audiences across the country.

“We were able to film our production of “Cry It Out” by Molly Smith Metzler which was on our stage, and we were able to distribute that as a video performance,” Ambrose said. “For the next show that was already in rehearsal, which was “PerkUp PerKup” by Isaac Gomez, we got the cast together and we recorded an audio play of it,” Ambrose said.

Aside from digital releases of shows that were already in production, Pittsburgh Public Theater started Classics N’at, a new series in which classic works are reimagined by local playwrights for audiences to view online.

“It gave [Kaminski] the opportunity to engage local artists and keep local artists employed and working during the pandemic, both on the writing side, the directing side and the performing side,” Castelli said. “It is a revisioned season of new works based on classic plays with the Pittsburgh flavor.”

Although the shutdown prevented in-person productions, Kaminski discussed how digital media offerings have allowed theater companies to employ more artists and reach larger audiences than was possible during a regular season in the past.

“Digital programming, as challenging as it is, also has a lot of opportunities. We’ve actually been able to continue programming through this and actually engage more artists than we usually do,” Kaminski said. “We’ve engaged almost 250 artists since last March, which is five times the number of actors we engage in a normal season. And have continued to reach audiences.”

As vaccine rollout continues in Pittsburgh, the possibility of loosened restrictions and larger gatherings draws near. Although Kaminski is unsure of the timeline of when in-person shows may return, she said she believes the return will not mark the end of digital theater content, because it allows the company to bring theater to isolated groups.

“There were folks who have been isolated from gathering at the theater long before COVID-19 hit, because of disabilities, geography, transportation barriers,” Kaminski said. “I have great hopes for other isolated communities that digital is actually an incredible portal to connect with them, to connect them to live art and storytelling.”

During the shutdown, companies have reenvisioned how theater can be brought to audiences in the comfort of their own home. But Ambrose said while he believes that digital is a solution, it is not a replacement for the live in-person experience these companies hope to bring back.

“There’s still something that’s so very unique to being in a venue, seeing live theater. It is the ephemeral-ness of it all, that this is only happening in this exact moment right now, this one time. And that can’t be replaced on video,” Ambrose said.