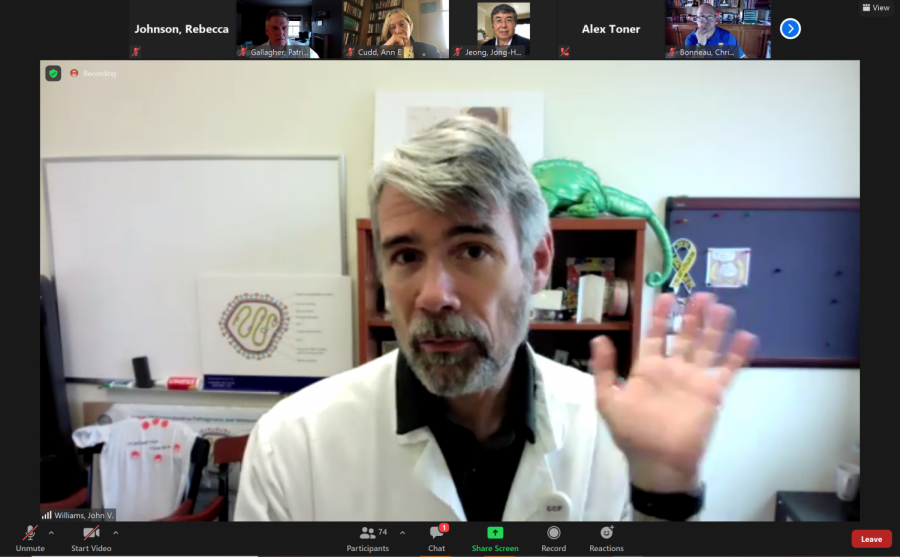 Williams, the head of the COVID-19 Medical Response Office, said despite having a “little spike” in positive cases from surveillance testing last week, the CMRO isn’t seeing a “continued increase.” Out of 815 students tested last week, 14 were positive, which dramatically increased Pitt’s spring prevalence rate from 0.38% to 0.63%. The CMRO offered testing last week and this week for students who attended these large gatherings.

“So where we are now with the numbers today is actually we’re not seeing a continued increase, and I don’t know for sure why that is,” Williams said. “I can tell you what the CMRO did. In fact, Monday before even the dashboard was updated Tuesday, we were upgrading our message to basically highlight to people … we are still in a pandemic.”

Williams discussed the state of COVID-19 on campus at Thursday afternoon’s Senate Council meeting hosted via Zoom. Williams and other University officials addressed virus mitigation on campus, Pitt’s vaccine distribution plan as well as student concerns at the meeting.

Kenyon Bonner, the vice provost and dean of students, said Pitt considered St. Patrick’s Day and warm weather as “trigger events,” meaning they had a high potential to cause students to gather in large groups. Bonner said while on-campus students did a “great job” social distancing throughout the holiday, students residing off campus “could have done better.”

“The students who are requesting to do in-person events are doing a phenomenal job with their plans and following our health and safety guidelines,” Bonner said. “But students off campus were hosting these gatherings are creating that risk for the entire population.”

But these concerns weren’t limited to just St. Patrick’s Day. Bonner also said Pitt received a number of reports of off-campus students hosting large gatherings during Wednesday’s Self-Care Day. Bonner said he is now worried about the impact of the state’s loosened restrictions on bar and restaurant capacity, which begin April 4.

Bonner said student’s behavior will determine if Pitt can host an in-person commencement as well as other in-person activities on campus. He said there are more than 212 in-person events planned this semester compared to 30 last semester, but that it “can easily be turned around” if there is a “significant spike” in COVID-19 cases which requires the University to tighten restrictions.

Chancellor Patrick Gallagher also offered insight at the meeting into Pitt’s decision to stay in the Guarded Risk posture following the increase in coronavirus cases. He said the Healthcare Advisory Group, a team of doctors that advises him, wants to avoid being “punitive” in switching postures. This lowest-level posture allows for most activities to occur in person with virtual options and limited restrictions. Pitt has been at this level since March 11.

“One of the reasons that to date we have not adjusted is that this is largely happening in off-campus environments and the kind of mitigation restriction like a shelter in place would primarily affect on-campus residents and on-campus activity,” Gallagher said. “So that would really be, at this point, more punitive than effective.”

But Gallagher added that if cases continue to rise and there is more community spread among students that goes into the residence halls, shifting postures or more harsh mitigation protocols might be put in place.

Some student members of Senate Council expressed their concerns surrounding student behavior. Daemon Rhein, the judicial affairs chair in the College of General Studies Student Government, said Oakland businesses have contacted CGSSG with concerns over student misconduct such as not wearing masks or socially distancing in their businesses.

“When the small businesses enforce Pennsylvania’s protocols, these students are acting vindictive and hostile,” Rhein said. “These local Oakland businesses have also told CGSSG that they have contacted the University of Pittsburgh, but their attempts to express their problems have either been ignored or disregarded because they should just do their job.”

Rhein said his goal was to inform the University of this alleged misconduct to continue the “mutual symbiotic relationship” between Pitt and local businesses. Gallagher said in response that it’s not Pitt’s position to tell businesses that “this is their problem” and that Pitt works closely with Oakland Business Improvement District leadership and individual businesses. He said either he or Paul Supowitz, the vice chancellor for community and governmental relations, will investigate the matter further.

“It’s a little discouraging to hear that it was characterized that way, and I’m hoping they just talked to the wrong person or caught someone on a bad day because that’s not the way we tried to approach it,” Gallagher said.

The CMRO reported on Tuesday that it detected the U.K. variant of COVID-19, B.1.1.7, on campus. Williams said a few students have contracted this variant, but “it’s really not clear what these variants mean.” He said there’s “no convincing evidence” that it will cause more disease and “reasonable evidence” that it may be more contagious.

“Even the B.1.1.7 … it doesn’t really change what we do for mitigation and the vaccination picture,” Williams said.

Williams also said from a “virus control public health standpoint,” there is “less risk” than the fall term. He said this is because the CMRO has more data from the fall term, there is basically no transmission from student to faculty in the educational setting and the vaccine picture is promising. But he still said students can’t “relax” by not following mitigation rules such as wearing a mask or socially distancing.

Gallagher ended his presentation on COVID-19 by thanking students who are following mitigation rules.

“This is not easy now, when sort of the tone that’s being set all around you is that we’re relaxing, and we’re getting near the end, and things are opening up and it’s warm weather,” Gallagher said. “And the fact that you’re still setting an example and taking care of not only yourself, but those around you is not going unnoticed.”