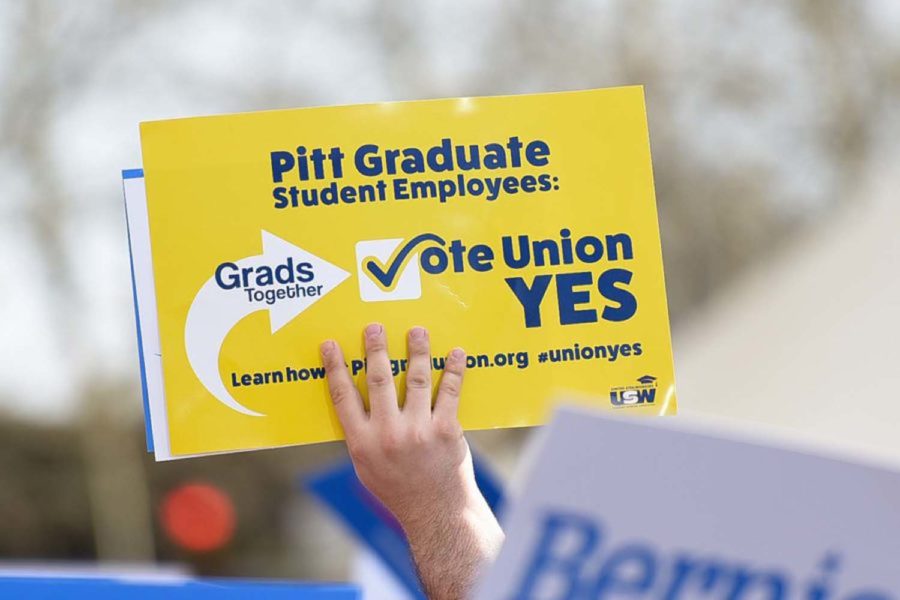 A multi-year attempt to unionize more than 2,000 graduate students at Pitt appeared to have fallen through earlier this month when the Pennsylvania Labor Relations Board upheld graduate students’ April 2019 vote against unionization.

But United Steelworkers, the union aiding Pitt graduate students’ and faculty’s unionization efforts, filed an exception to that ruling last Thursday. In their exception, union organizers challenged the PLRB’s ruling that said the University had provided sufficient evidence to show that its coercive conduct during the election did not substantially affect the vote tally.

The Board concluded that Pitt committed unfair labor practices during the union election but said the University’s misconduct was not significant enough to alter the outcome of the election, which union organizers lost by a margin of 39 votes out of nearly 1,400 eligible votes cast.

Pat Healy, an organizer and doctoral student in Information Sciences, said the ruling was “not particularly surprising” because the Board dismissed several Steelworker complaints about unfair tactics by the University in an August decision.

The March 1 ruling concerned an email sent to graduate students in chemical engineering by department chair Steven Little. The email — which showed Little knew how many engineering students had voted in the first two days of the election — implied that Pitt was tracking voters, a practice generally banned in union elections. Labor Board hearing examiner Stephen Helmerich said in 2019 that Little’s email was “coercive,” but the full Board determined that it “did not affect the results” of the election because it was only sent to 34 people — less than the 39-vote margin that decided the election.

In its exceptions, the Steelworkers said the Board’s conclusion “fails to adequately account for the effects of the coercive tendencies” of Little’s email.

The Steelworkers said in its filing that 28 of the 34 graduate students who received Little’s email eventually voted in the union election, but that it’s unknown which side they voted for. In the April 2019 election, 677 students voted in favor of union representation and 716 voted against. The Steelworkers argued that if all 28 students had voted against unionization but would’ve voted in favor if they hadn’t received Little’s email, that would be enough to overturn the election results.

The Board also said, “[f]or purposes of determining whether the outcome of the election could have been affected by the Employer’s unfair practice” the six students who did not vote in the election after receiving Little’s email should be added to the pro-union tally.

The Steelworkers also argued that the Board “inverted the burden of proof” in its decision, placing the burden on union organizers, not the University, to prove that the 28 graduate students who voted after receiving Little’s email would have otherwise voted for the union. They said that, “as a matter of law,” the burden of proof is on the University — “the guilty party” — to demonstrate that its coercive actions did not impact the election results.

“The University has not introduced any evidence into the record, let alone proven, that [the 28 students] did not cast their ballots against representation,” Steelworkers said in the exceptions. “Still less has the University proven that, absent its illegal coercion, those 28 votes would not have been cast for the Union.”

A Steelworkers spokesperson said “USW continues to believe that the administration’s conduct prevented a fair election and will continue to pursue the appeals processes provided for under the law.”

“We remain confident that the University’s actions throughout the graduate student election were appropriate, and that the vote count certified by the PLRB will be upheld,” Seldin said.

“[Pitt] sort of depicted it as the end of the campaign,” Enders, a graduate student researcher, said. “We’re still organizing. There are numerous avenues we can take to continue the fight.”

If the Board once again rules in favor of Pitt’s administration, organizers can appeal to the Commonwealth Court of Pennsylvania. The timeline for another union election remains unclear.

“There could be a lot of legal battles to continue extending this process,” Healy said.

Both the Steelworkers and graduate student union organizers at Pitt declined to provide details about their legal strategy moving forward. But if results of the most recent election remain tangled up in the appeal process, organizers could once again begin collecting authorization cards, which graduate students sign confidentially to express their support for a union election. Organizers would need to collect cards from 30% of graduate students to trigger a new election. Steelworkers say they’re planning to let the legal process play out before considering that option.

The COVID-19 pandemic hasn’t stalled legal proceedings, but it has foiled many organizing attempts, Healy said, making it harder to reach new graduate students who have come to Pitt since the election two years ago.

Before the pandemic hit last March, “there was a lot of doorknocking, there was a lot of trying to create these one-on-one conversations as much as possible,” Healy said. “Over the last year, it’s been a whole lot more difficult. It’s a lot more dependent on trying to set up random Zoom sessions to try to meet face-to-face.”

Now, instead of campaigning in person, organizers must wait for graduate students to answer an email.

“Everything has to be through these blind emails,” Healy said. “Unless someone is already interested in a union, they probably won’t answer our emails.”

Despite the unforeseen challenges of organizing during a pandemic, Healy said COVID-19 has laid bare many of the issues plaguing graduate students. Nearly 800 graduate students at Pitt signed a petition in June, demanding that the University grant one-year funding extensions to all graduate students. Pitt spokesperson Kevin Zwick said last month that only individual departments or schools could grant these extensions and that they would be applied on a case-by-case basis.

Graduate students have had several priorities since kicking off their unionization drive in 2016 — improving job security, increasing pay through stipends, receiving higher quality health care, maintaining lighter weekly workloads and ensuring that graduate students have a say in administrative decisions.

Enders said especially during a pandemic, Pitt must seek out graduate student voices when putting in place safety measures.

“We need to ensure that grad students have a say in what protocols are necessary to feel safe in their lab spaces, feel safe TAing,” she said.

But not all graduate students at Pitt believe the proposed union would be a net benefit. Sam Herron, a fourth-year graduate student in the School of Medicine, voted against unionization in 2019. He said he’s not against the idea of unionization, but he didn’t like the “execution” of Pitt’s union drive.

“There’s a lot of different designations of grad students,” Herron said. “They have very different appointment criteria across different schools.”

For example, Herron said he spends a lot of time on research and lab work, but unlike graduate students in the Dietrich School of Arts and Sciences, he has no teaching responsibilities.

Healy said organizers have reached out to School of Medicine graduate students numerous times, but “it’s very difficult at our capacity to reach everyone.”

Organizers say the number of students who voted against unionization — 716 — hasn’t factored into their campaign strategy a great deal. It’s been two years since the last election, and hundreds of graduate students who would likely be eligible to vote if an election were held this semester weren’t eligible in the previous election. But the timeline for another election remains blurry.

Herron said if graduate students get another chance at a union election, he would be open to reconsidering his vote.