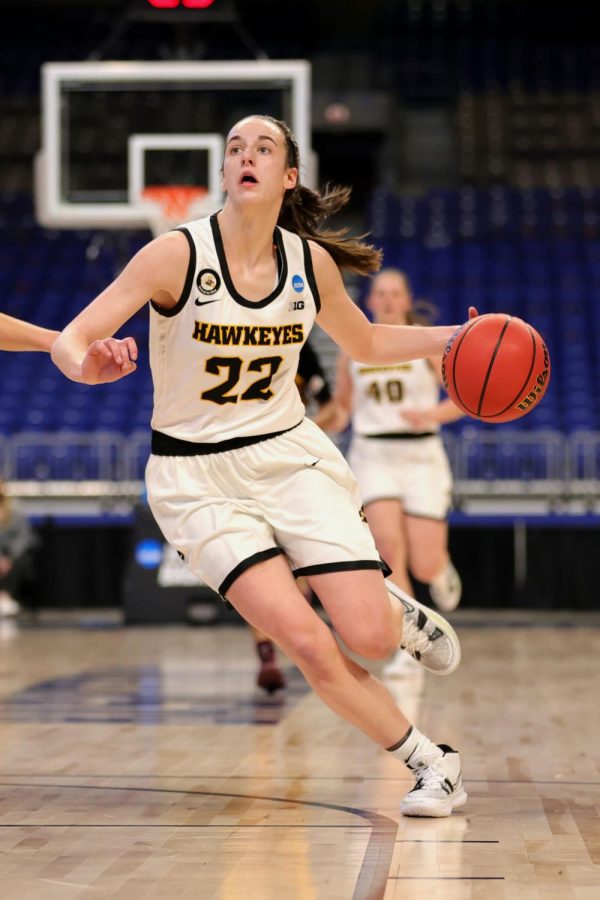 Iowa's Caitlin Clark controls the ball during first-round action in the NCAA Tournament at the Alamodome on March 21, 2021, in San Antonio, Texas.

While the men’s college basketball tournament has ruined brackets in Indianapolis, the women have done the same in San Antonio, but to a lesser degree.

There have been a fair share of upsets through the first two rounds, but unlike the men’s tourney, the lowest seed in the women’s Sweet 16 is a six seed. Also unlike the men, only one of the schools in the Sweet 16 is a mid-major school (Missouri State), compared to four on the men’s side.

Each region has a team expected to win out and hoist the championship trophy, as well as a team that could make a surprise run to the Final Four. Perhaps it’s hard to determine a sleeper pick when the tournament winner is historically a higher seed, but anything is possible in March.

The No. 1 Stanford Cardinal will square off Sunday against the No. 5 Missouri State Bears. Both teams have won both of their games by double digits, but the Bears had some help from No. 13 Wright State, who upset No. 4 Arkansas in the first round. On the other side, ACC runner-up and No. 2 Louisville hosts No. 6 Oregon. The Cardinals — with an ‘S’ —  have lost only three times in the regular season — twice to NC State —  while the Ducks lost five of their last six.

When just looking at the base numbers, the consensus pick would be to see Stanford and Louisville in the regional final. Both average more than 77 points per game, while only surrendering 60 points or less. ACC Player of the Year, senior guard Dana Evans has herself averaged 19.6 points and 2.7 rebounds a game for Louisville.

But Missouri State has been on fire as of late, winning 19 straight games. It’s likely that the Bears’ hot streak will end at the hands of Stanford, but they are 16-0 when they score more than 52 points. If the defense can hold, Missouri State will represent the Alamo Region in the Final Four.

No. 1 South Carolina has run rampant over the SEC, winning all but two conference games. They will play No. 5 Georgia Tech, who barely snuck past No. 12 Stephen F. Austin in overtime of the first round, but then turned around and walloped No. 4 West Virginia in the next round. No. 2 Maryland has been red-hot offensively as well —  they will host No. 6 Texas.

Maryland has scored at least 100 points in seven games this season, including 104 in the Big 10 championship game. It’s hard to look at that and not think they will win the region, and even though South Carolina has dominated, Maryland has been even more dominant. The Terrapins have only one conference loss which they dropped by a mere two points. They’ve also outscored their postseason opponents 198-109 through the first two rounds. South Carolina’s sturdy defense will not be enough, and the Terps will win the Hemisfair.

No. 1 NC State has been near the top of the NCAA rankings for the entire season. They’ll face off against No. 4 Indiana, who held its own in a dense Big 10 this season, and benefitted from an upset of No. 5 Gonzaga at the hands of No. 12 Belmont. The Mercado is the only region where the top 4 teams made it to the Sweet 16, but that almost didn’t occur. No. 2 Texas A&M needed all 5 minutes of overtime to come back from 12 points against No. 7 Iowa State, ending on a last-second jumper from Aggies’ sophomore guard Jordan Nixon. They will face No. 3 Arizona, who finished behind Stanford in the Pac-12 standings.

The Aggies will most certainly ride the wave of momentum from that buzzer-beater when they play Arizona, but it may not be enough to reach the national semis. NC State boasts back-to-back ACC championships, and they’ll be looking to avenge their loss in the last Sweet 16 two seasons ago. With four players averaging over 10 points and five rebounds a night, NC State will emerge from the Mercado and slide into the Final Four.

The marquee matchup in this region pits No. 5 Iowa against No. 1 Connecticut. Iowa’s first-year guard Caitlin Clark, and UConn’s first-year guard Paige Bueckers has torn up opponents for more than 20 points and seven boards through the first two rounds. The winner of that game will play either No. 6 Michigan or No. 2 Baylor.

The Baylor Bears are defending national champions and current Big 12 champions. Michigan upset No. 3 Tennessee in the second round, but they stumbled into the tourney winning only four of their last six regular season games. Baylor will most likely take care of Michigan, since they have a higher scoring output per game. But whoever wins the Iowa/UConn matchup will win the River Walk Region. The first-year guards will prove too much for either the Bears or the Wolverines.