‘Rally for Solidarity’ calls for unity, stop in anti-Asian violence 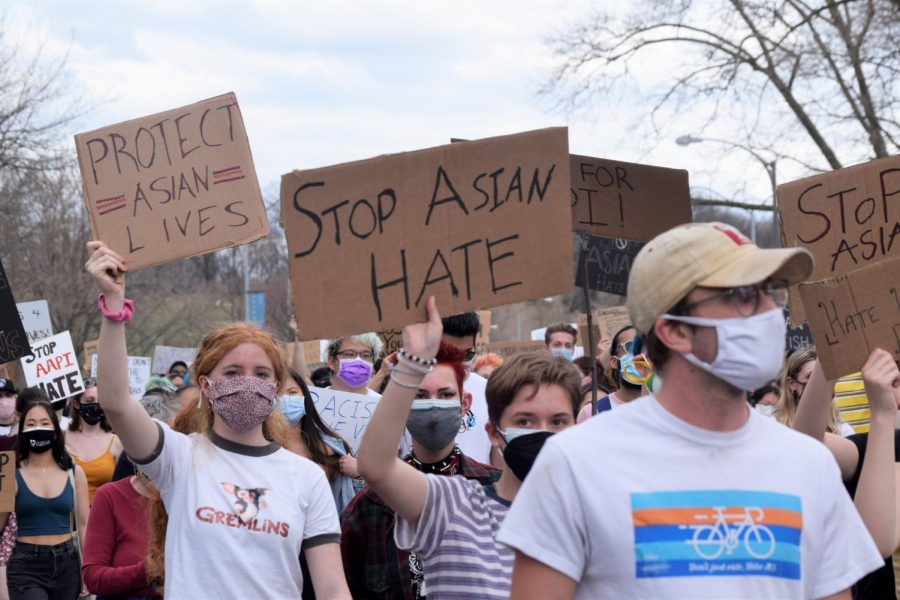 Onlookers could hear echoes of “2-4-6-8, stop the violence, stop the hate!” as a crowd marched in protest from Flagstaff Hill to Schenley Plaza on a warm Wednesday afternoon.

After a few people spoke, Vinh Dang, an organizer and ECAASU’s communications director, led the group in a moment of silence. To honor the eight lives lost in last week’s shooting in Atlanta, attendees sat on the grass with their heads bowed towards the ground for eight minutes.

Phoebe Balascio, ECAASU’s outreach director, said the event was an important act toward building solidarity and strong relationships among communities.

“Overall, this event is to build solidarity within and across communities which have been historically marginalized and oppressed,” Balascio said. “I really just hope that all of those community organizations and community leaders are uplifted, their work is highlighted.”

The rally started with a Japanese folk drumming performance of Taiko performed by Pittsburgh Taiko, a community organization that works to promote and educate the city on the culture and history of folk drumming.

Kanoko Kamata, a member of the group and second-year Ph.D. student at Pitt, said she was shocked when she heard about the shooting in Atlanta. She added that as a Japanese woman living in America who has faced hate and discrimination, she wanted to show her support for her community and to others, as well.

Many of the speakers at the rally were women of Asian descent, and each expressed their thoughts and reactions to the events in Atlanta and the rising hate towards Asian Americans. Judy Suh, of APALA’s Pittsburgh chapter, said her reaction towards last week’s shooting came in the form of grief and of rage.

“My first reaction was a sharp physical grief that felt like a punch in the stomach. My second reaction was rage. Not only at the shooter but at the criminal justice failures that refused to recognize that it was a hate crime,” Suh said. “And to the police that sympathized with the shooter to make it all worse. Rage at the failure of our elected officials, their failure to even try to protect us whether we’re undocumented immigrants or citizens and families who have been here for generations.”

Suh said the violence and hate towards the AAPI community has been prevalent since the 19th century.

“It feels like being on a runaway train seeing the cliff straight ahead, unable to jump off in time,” Suh said. “The train is systemic American racism. The train is American history — our history that we’ve been written out of again and again.”

Itha Cao, chef and owner of the Chinese restaurant The Hungry Cao in Downtown, said growing up in America, she realized that she was different from her peers when she was put in ESL classes, despite English being her first language.

Cao said she is frustrated with the negative stereotypes associated with Asian Americans, from the model minority myth to the fetishization of Asian women. At the rally, Cao wore a shirt that read “Not Your Fetish.”

“Because of my face I was treated as a perpetual foreigner, an unwelcome guest in my own country, and when it pleased them, a sexual object to be ogled, commented upon and devalued as a human being,” Cao said. “I wish I had learned about why I had been objectified as a sexual object, a fetish. A dangerous stereotype that ended eight lives last week, six of them Asian women just like me.”

Alyssa Khieu, a sophomore pre-pharmacy student and advocacy chair of Pitt’s Asian Student Alliance, said she came to Wednesday’s rally because she feels it is important to stand as a community, and she expressed her frustration with history and rise of hate crimes towards Asian Americans.

“Personally I’ve been very frustrated with all of the anti-Asian, specifically Southeast Asian, violence going on,” Khieu said. “It just feels like we’ve been talking about this for so long and nothing has changed that much.”

Khieu said though this hate and discrimination is not new, it is important to use collective awareness to push for more change and prevent hate from harming individuals and communities.
“I recognize that advocacy and movements aren’t linear, but I think at this moment now when there is a lot of momentum it’s important to utilize it,” Khieu said. “And it’s frustrating because we don’t want it to have to get to a point where people are killed or deported for us to finally pay attention to these issues that are happening.”

“We must make it more difficult for people with hate in their hearts to get access to deadly weapons,” Fleitman said. “We need new laws in the books to protect the vulnerable.”

Ilyas Khan, a speaker from the Sunrise Movement, said the one common “enemy” that perpetuates and upholds hate in America are the “colonizers,” and that they have built a wedge between oppressed and marginalized groups to keep them from fighting back.

In a call for action to those at the rally and these communities as a whole, Khan urged people to come together regardless of differences in order to dismantle systems that harm the innocent and perpetuate hate.

“We may have our differences but today we need to fight together. All of us not as individuals but as communities, whether you’re a white cis man or a Black trans woman,” Khan said. “We all have a part in dismantling the system and rebuilding it as something better, something inclusive, something that believes that we are all truly equal that we are all valuable and that no one is above anyone else.”