Opinion | The minimum wage must be equivalent to a living wage 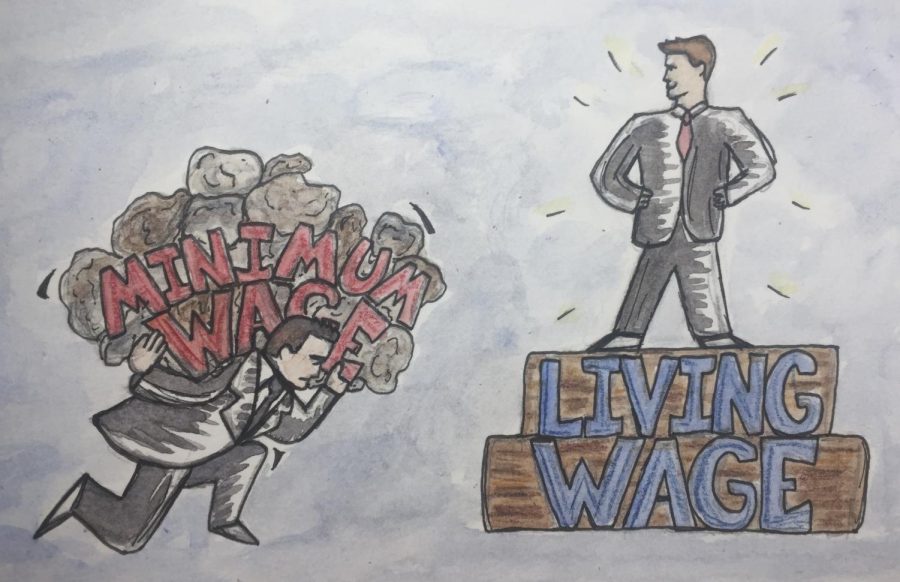 I recently watched a video — which I strongly recommend everyone watch and pay attention to — of a West Virginian woman testifying before the U.S. House. Her name is Amy Jo Hutchison and she is a single mother of two. She also has a bachelor’s degree, has two jobs, is a community organizer and used to be poor. She stood passionately in front of Congress to let the ruling class know how difficult it is to be poor. She pointed out that members of Congress get more money for their furniture — $40,000 per year — than many people make in a year.

She brilliantly noted that if you make $10 per hour you aren’t considered poor by government standards, but you will likely remain insecure about your financial situation — as Hutchison used to. Hutchison used to worry about how she was going to feed her children each night or which bills to pay and which to leave for later because she couldn’t afford to pay them all at once. Has Sen. Kyrsten Sinema (D-Ariz.) or any other congressperson brought a calculator to the grocery store because they were on that strict of a budget? Well, Hutchison used to, and millions of Americans currently do. $10 per hour is nowhere near enough to live on.

There are millions upon millions of Americans who are in the position Hutchison used to be in. Unless you have generational wealth or work for yourself, you have to sell your labor just to survive — most of the time for meager wages. And if this is the reality we live in, there needs to be just compensation for the sacrifices we make as workers. At a minimum, workers should earn enough to cover basic expenses and have money left over for discretionary use. The federal minimum wage is $7.25 per hour — $1,160 after working four 40-hour weeks — while the average rent for a one-bedroom apartment is $960 per month. You can’t expect someone to make ends meet when they only have $200 to pay for groceries, bills, medical visits and other expenses.

Given how weak unions are and the unwillingness of company executives to pay workers adequately, the federal government must raise the minimum wage so businesses pay workers a living wage.

Thanks to the Massachusetts Institute of Technology, some very intelligent people have done all of the legwork to calculate what a living wage is in America. Their analysis is built on costs of food, child care, health care, housing, transportation and other necessities — all of which are dependent on geographical location. On average, the living wage in America is $16.54 per hour. Once you take a closer look at the numbers, the horror of our system sets in.

For a family of four with two working parents, both parents need to amass about 75 hours of minimum-wage work, each, to earn a living wage. A single parent with two children — who earns the federal minimum wage of $7.25 per hour — would need to work 24 hours per day for six days to earn a living wage. And this is just if the living wage is $16.54 per hour. The value of a living wage differs in every city, county and state. For instance, the living wage of a single parent with two children, here in Pittsburgh, is $33.91 per hour — quite a leap from the current minimum wage, which happens to be lower than a poverty wage in the Steel City.

While it’s clear that the minimum wage is not a living wage, many people would be okay with this. A lot of people hold the view that low-wage jobs are starter jobs, just for young people. They think that once you get out of your teens or early 20s, you leave that low-wage job for what some consider “adult jobs” — a typical nine-to-five that pays a monthly or yearly salary.

However, this belief is largely a myth. First of all, more than 82 million workers work jobs that pay hourly rates. Of these workers who are paid hourly, about one-fifth of them are under the age of 25. And, those younger than 25 only make up about two-fifths of minimum wage workers.

We also need to remember that just because workers make more than a minimum wage, doesn’t mean they make a living wage. At a time of low national unemployment in 2019, the Brookings Institution found that 53 million U.S. workers were making low wages — 30% of whom live below 150% of the federal poverty line. More specifically, the study found that the median wages of this collection of workers — 44% of all workers aged 18-64 — are just $10.22 per hour and $17,950 annually. About 56% of this subset are between the ages of 25 and 50 — your prime working years — and nearly half of them raise children.

If so many workers are struggling to make ends meet, why does America have such a low minimum wage? The way I see it, America’s minimum wage has not increased since 2009 because the vast majority of American politicians are in the pockets of massive corporations. We all know that massive corporations have a tight grip on American democracy, but do they benefit from a low minimum wage? Yes, they do — after all, low wages mean more money left over for corporate bonuses. Politicians in the pockets of these mega-corporations will directly oppose bills that hurt big business executives and therefore will vote against raising the minimum wage.

Earlier this month, Congress agreed to pass a stimulus bill that provided direct and indirect ways for more Americans to get some cash. For a while, it looked like they would also amend the bill to include a minimum wage increase … until they held a vote. Sen. Bernie Sanders (I-Vt.) forced a vote to amend the bill to include a $15 an hour federal minimum wage — an amendment that is supported by two-thirds of the population. Unfortunately, it failed to pass by a vote of 42-58.

But, there are other ways to pass a $15 minimum wage. If Biden wanted to, he could immediately increase the minimum wage for federal employees via executive order. It probably will not happen, but it’s worth knowing that Biden has this up his sleeve and is actively choosing not to do this.

Many House and Senate Democrats recently proposed a bill to increase the federal minimum wage to $15 by 2025, with some provisions preventing some workers from earning $15 per hour until 2027. And while this would still put minimum wage workers below what is needed for a living wage, this is a decent start.

Yet with each passing second, the U.S. dollar becomes less and less powerful, and I fear that it will be years — possibly even decades — before the minimum wage equals a living wage. We must remember that the purpose of the minimum wage — as set forward by the Fair Labor Standards Act of 1938 — is to protect America from the “evils and dangers resulting from wages too low to buy the bare necessities of life.”

I would like to point out that opposing a minimum wage increase is not a moderate or conservative position — you just don’t think Americans working essential jobs deserve to be paid adequately. I’d like to see every politician who voted no on Sanders’ amendment live on $7.25 an hour for a month. Geneva, Switzerland, just introduced a $25 minimum wage — that’s what happens when politicians care about their citizens.

Finally, I want to address some concerns I see from other workers. Some oppose a minimum wage increase because they might currently make $15 per hour, or just above/below that, despite doing more “skilled” or “difficult” work than current minimum wage workers. What these people don’t realize is that companies will be forced to raise your pay significantly, or else you might leave your difficult job for a cashier’s job at Arby’s. This is why we must fight, not just for a $15 minimum wage, but for a livable minimum wage because it will benefit all workers.