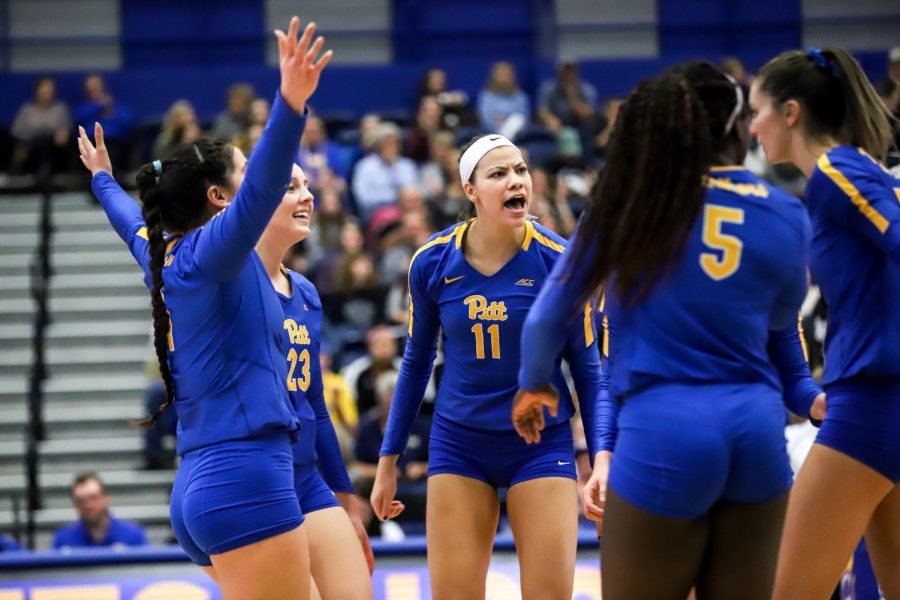 Pitt defeated No. 25 Florida State 3-1 on Friday, improving to 9-0 in the spring portion of the season

Coming off of a dominating performance in the Backyard Brawl against West Virginia on Wednesday, No. 19 Pitt (13-4) extended its winning streak to nine with a 3-1 home victory Friday over No. 25 Florida State (11-5).

The first frame turned out relatively one-sided, as the Panthers jumped out to a quick lead and didn’t look back. Junior middle blocker Sabrina Starks and redshirt freshman outside hitter Valeria Vasquez Gomez led the way with six and four kills apiece, respectively.

The second set, much like the first, saw the Panthers go up early on, but the Seminoles rallied back this time around. Florida State pulled within one point of the Panthers after falling down 5-1 early on in the set and kept the second set close for the majority of the frame.

The second set came down to who would win the battle at the net, and the Panthers did so with ease. Senior right-side hitter Chinaza Ndee’s strength on the net proved too much for the Seminoles as she racked up kills on the attack and refused to let the Seminoles finish the play with multiple deflections. Sophomore middle blocker Chiamaka Nwokolo flexed her muscles in the second set as well, with several powerful kills tormenting the Seminoles.

The Seminoles tallied more blocks than the Panthers in the second set, but the Panthers prevented spikes from turning into kills thanks to multiple deflections from Ndee and Nwokolo, helping the Panthers win a much closer second set 25-22.

Through two frames, Starks led the Panthers with eight kills and an impressive .700 hit percentage on top of two blocks, dominating the Seminoles on offense and defense.

The third set saw the two teams trade points for much of the early phase of the frame. Florida State eventually ripped off several points in a row and pulled away. Unlike the second frame, the Seminoles owned this set on the net, stopping the Panthers from registering a single block. Senior middle blocker Taryn Knuth refused to let the Panthers execute many spikes at all, granting the Seminoles the opportunity to steal seven straight points.

Pitt head coach Dan Fisher expressed some frustration with how the team played in the third frame, citing poor and panicked passing.

“A lot of the night we weren’t playing our best volleyball,” Fisher said. “We need to pass the ball better. We weren’t consistent as much as I’d like to be. And I thought that in some of the long rallies we could have been a bit more simple and we were a bit frantic.”

The deficit proved insurmountable for the Panthers in the third frame as the Seminoles handily won 25-14.

The fourth and final set of the match also saw the two squads trade points back and forth. The Seminoles held a 10-8 lead until the Panthers won four straight points and took the lead — a lead they would not relinquish.

A combination of Seminole miscues and timely strong finishes from the Panthers allowed the Panthers to take the fourth set 25-20 to claim victory. Fisher cited strong mental toughness as a big reason why the Panthers were able to rebound from a poor third set.

Starks had a career day against the Seminoles, with a match-high hitting percentage of .588 as well as a season-best 11 kills while only committing one attack error. She credited her teammates with setting up the career day.

Fisher gave high praise for Starks’ night, crediting her with a standout performance in addition to the play of teammates who set her up for so many of her kills.

The recent victories showed signs of encouragement for the Panthers, but Ndee said the Panthers still want more.

“We want to make a run in the [NCAA] Tournament,” Ndee said. “We’ve been working hard at it — that’s been the drum beat of the entire season.”

The Panthers look to keep their momentum rolling in another ACC matchup against the North Carolina Tar Heels in the final match of their home stand on Sunday at 12:30 p.m.