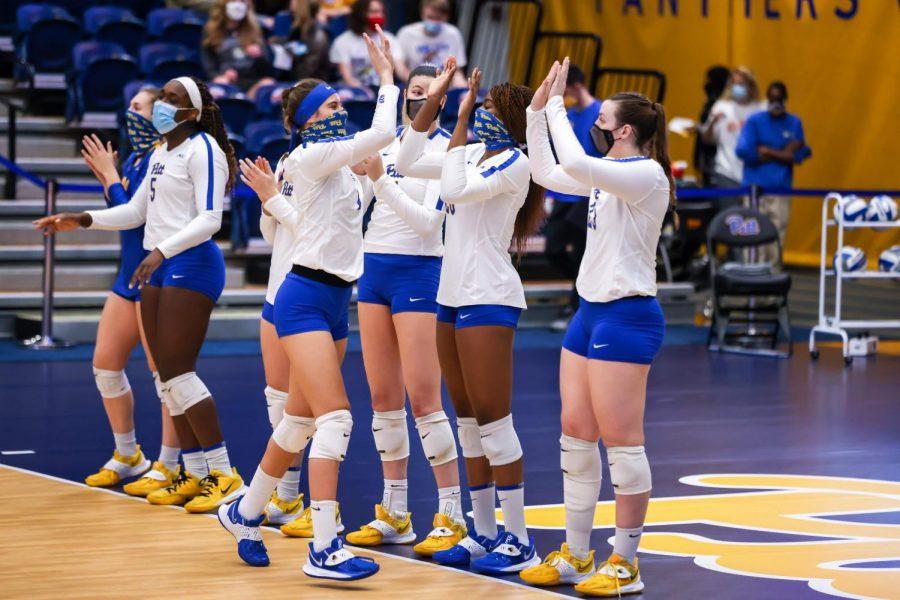 Pitt returned to form at the Fitzgerald Field House on Sunday, increasing its win streak to 10 with a 3-0 blowout against UNC.

When Pitt volleyball lost one of its home matchups against Louisville in the fall, it left an unusual feeling in the stadium. The team hadn’t suffered a loss at the Fitzgerald Field House since 2017, snapping a 37-match winning streak. But the Panthers (14-4, 12-4 ACC) have wasted no time returning to their home dominance, winning every home match since and increasing their win streak to 10 with a 3-0 blowout against North Carolina (10-6, 9-5 ACC).

Despite the lopsided result, North Carolina hasn’t appeared like a bad team at all this year, coming into Sunday’s match fifth in the ACC standings, just one spot below the Panthers. The Tar Heels upset No. 18 Notre Dame last week, and lost a five-set thriller to No. 25 Florida State on Saturday.

North Carolina head coach Joe Sagula has led the program for more than three decades, compiling a 624-360 record and earning five ACC Coach of the Year selections in 31 seasons. Pitt head coach Dan Fisher lost three of his first four matches with the Panthers against Sagula, but has now won five straight against the decorated coach.

“I think there’s kind of an ebb and flow of programs in general,” Fisher said. “They’ve suffered a little bit from the portal the last few years, had a few transfers. But even with all that, I think they are still 10-6 overall this year, so they’re still a very good team and we have a lot of respect for them and know there’s gonna be a lot of great battles ahead in the future.”

Pitt’s dominance began from the first serve, as the team won the first six points of the match. Senior right-side hitter Chinaza Ndee, fresh off being named as a finalist for the 2020-21 Senior CLASS Award, started off unconscious, grabbing four kills in the match’s first eight rallies. Ndee finished the set with seven kills, and senior middle blocker Sabrina Starks put away the final ball as the Panthers cruised to win the first game 25-15.

“I was just in a good rhythm with [redshirt senior setter] Kylee [Levers],” Ndee said. “Obviously we passed the ball well so it could be set, which is an important part of it, but I think it started with having a great practice this morning and a great warm up and feeling ready to go.”

Ndee carried that momentum into the second frame, finishing the first point of that game as well. The Panthers built an early cushion again, winning six of the first seven points of the set, and never looked back. Senior outside hitter Kayla Lund, who finished with a match-high 10 kills, recorded three kills in the second game and came up with a few key digs that kept the Panthers alive in long rallies. Pitt won the second set 25-11 to take a 2-0 lead.

In a normal season, Sunday’s match would involve Senior Day festivities, as the last home performance of the year. But because of the odd circumstances of a season during the COVID-19 pandemic, and the NCAA’s extra year of eligibility to all fall sport athletes, Pitt decided not to have a Senior Day this season. Lund said she didn’t find it difficult to treat the match like any other.

“Of course, with our last game we wanted to make it more special and we wanted to come out with a win, but that was kind of what we were more focused on UNC, and what they were going to do and just coming out with a W,” Lund said. “This year there’s just been so [much] uncertainty, so anything in the future we aren’t trying to think about, just staying in the present.”

Although Pitt had no fans for its first two home matches of the year, it has allowed a limited capacity for the rest of the season. The team hasn’t had any ticket sales, but it’s gotten to give out a certain number of passes for each game to families, boosters and more. This game, the Panthers received a key boost from a group of guests in attendance — the Pitt band.

“We still feel like we did have a home-court advantage,” Fisher said. “The Volley Pitt was great, but today the band was amazing. They were cheering, we really appreciate the supporters we do have making it feel like, whatever, 200, it felt like 1,000 at times.”

North Carolina never came close to winning a set, and that continued in the third and final frame. Pitt even got a chance to see some of its bench players shine, with sophomore middle blocker Chiamaka Nwokolo and junior outside hitter Jordan Lockwood recording kills. Lund put the match away with a final kill, taking the third set 25-13 to complete the sweep.

The Panthers now head to Clemson, South Carolina, for their last stretch of the regular season. They will face both Clemson and Virginia Tech there on Thursday and Friday, respectively, before awaiting their fate at the NCAA Tournament selection show next Sunday.

“I just think we want to string together a bunch of good practices and good games in a row,” Ndee said. “I think we want to feel like we are at our best, that we’re peaking at the right time, and just focusing on getting better. I think we’re not trying to focus too much on the results or anything like that, just focusing on getting better every single day.”