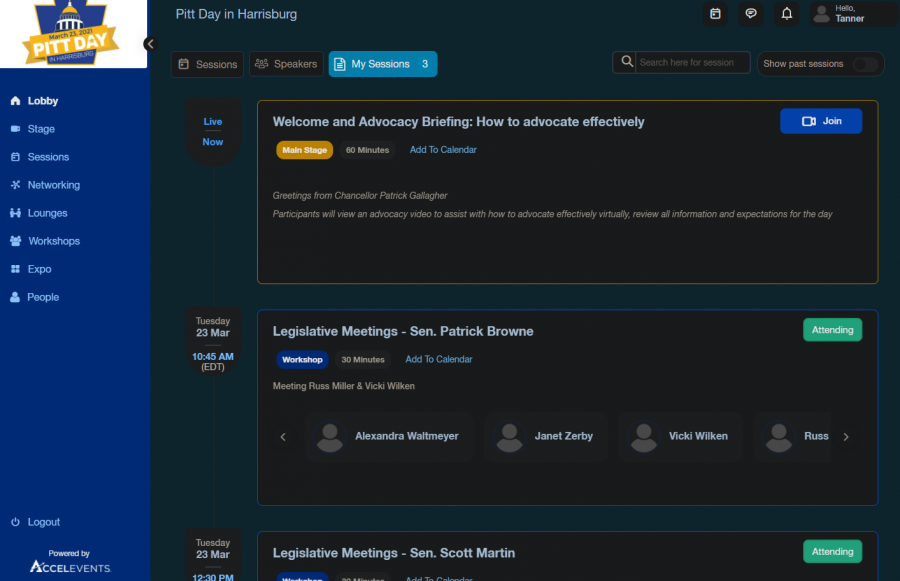 The Office of Community and Governmental Relations and the Pitt Alumni Association welcomed about 65 people virtually on Tuesday to Pitt Day in Harrisburg. At this event, students and other members of the Pitt community advocated for increased funding from the state and spoke directly with state legislators and their aides.

By Tanner Vradenburg, For The Pitt News

Paul Supowitz, vice chancellor for community and governmental relations, said last week that Pitt is an asset to the economy and should be funded accordingly by the state.

“We are also a huge economic driver for Pennsylvania’s economy through the research that we conduct and through our daily work,” Supowitz said. “We inject over $4.2 billion a year into the regional economy.”

Supowitz spoke last Tuesday at Pitt Day in Harrisburg. The event — hosted by the Office of Community and Governmental Relations and the Pitt Alumni Association — welcomed about 100 people virtually rather than in Harrisburg. Students and other members of the Pitt community advocated for increased funding from the state throughout the day and talked directly with state legislators and their aides during an “uncertain” budget year because of the COVID-19 pandemic.

This day of advocacy follows Gov. Tom Wolf proposing flat funding for Pitt and three other state-related universities in February. Flat funding means Pitt would receive the same amount of funding next year as it did this year, which is about $151,507,000. This is the third straight year Wolf has proposed no increases for the state-related universities — Pitt, Penn State, Temple and Lincoln. He also proposed flat funding for the 14 universities included in the Pennsylvania State System of Higher Education.

The budget is now circulating through the legislative process, which usually finishes in June. The funding proposed for Pitt is $151.5 million in general funds plus $3.3 million for rural education outreach. Pitt submitted its budget proposal for 2021-22 in October, requesting a 5% increase in funding.

Pitt spokesperson Kevin Zwick said Pitt has a favorable budget outlook moving forward. He referenced a Moody’s Investor Services update from last week that raised the outlook for the U.S. higher education sector from negative to stable, which suggests improved revenue potential for colleges and universities in the next year and a half. It also found that large public and elite private universities are expected to outperform regional institutions and private colleges with “less visible brands,” according to Inside Higher Ed.

But Zwick said the COVID-19 pandemic had a sizable impact on Pitt’s finances, resulting in $165 million in costs and lost revenue in fiscal year 2020 and through the end of June 2021. He said Pitt is focused on “achieving cost reductions and operating efficiencies” during the pandemic. Pitt’s funding from the state remained flat for the 2020-21 fiscal year.

“These costs have been necessary to invest in technology, de-densified housing and the health and safety of students, faculty, staff and the community at large,” Zwick said.

Zwick added that the fiscal year 2021 budget includes a permanent $32-million cut to the Educational and General budget and a temporary $44 million to address costs related to the pandemic. The Educational and General budget includes changes to tuition, funding for larger academic initiatives and salaries for faculty and staff. He said cost reduction was also implemented through early retirement initiatives for faculty and staff.

Tuition and fees remained flat this academic year, after hikes last academic year ranging from 2.75% to 7%. Total compensation in the Education and General budget is expected to stay roughly the same, at about $720 million. Pitt has also received a series of federal relief funding that helped offset pandemic-related losses.

At Pitt Day in Harrisburg, University administrators and students also discussed the University’s budget outlook. After Chancellor Patrick Gallagher kicked off the event in an introductory video on an Accelevents page Tuesday morning, Mark Nootbaar touched on Pitt’s funding. Nootbaar, a senior writer and editor at Pitt’s Office of Institutional Advancement, said topics such as policy and funding affect students’ lives.

Supowitz also encouraged students to advocate for funding for Pitt to keep the University cost-effective for students.

“The message is to support the University of Pittsburgh and it’s direct appropriations because that’s what helps keep the University affordable,” Supowitz said.

After the introductory portion of Pitt Day in Harrisburg, attendees were then put into Zoom calls with aides and state senators. Nootbaar encouraged students to talk about their experiences at Pitt in the Zoom calls as well as ask the aides questions. There were other panels throughout the day such as a legislative career chat that explained the life of staffers in Harrisburg.

Other events included expositions that highlighted some of Pitt’s programs. The School of Social Work explained its Child Welfare Education and Research Programs. These programs provide professional development for undergraduate and graduate students and professionals in the child welfare workforce. Other programs such as the McGowan Institute for Regenerative Medicine and the Office of Veterans Services were also displayed in the exposition section.

“It was a real game changer for me,” Byers said. “Without that advanced education, I don’t think I’d be in the field today. It really provided me with the knowledge and skills I needed to make sense of all the trauma that I was seeing, with children and families.”