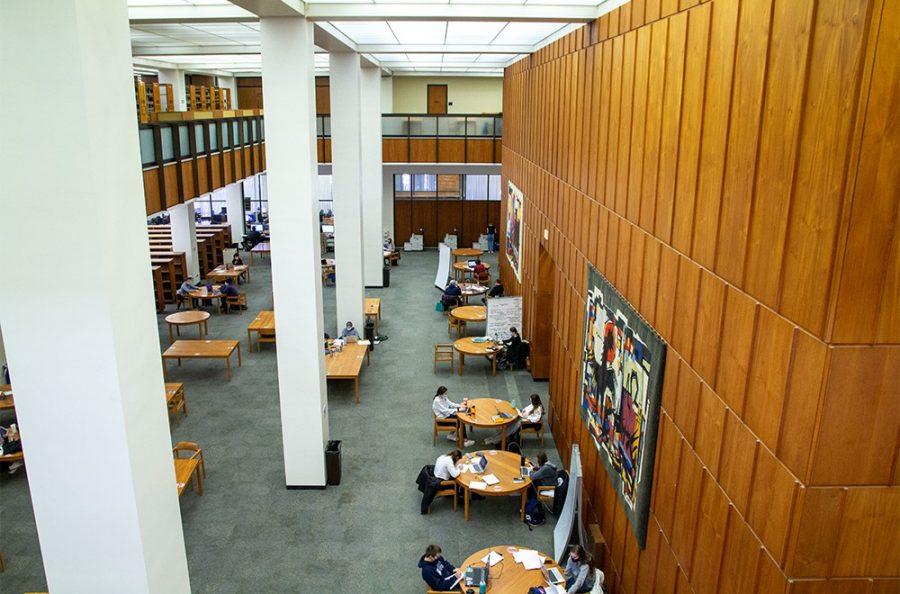 By Brandon Raglow, For The Pitt News

For Lingfeng Liu, a lab instructor at Pitt, the University’s move to Guarded Risk earlier this month was an opportunity to communicate more directly with her students.

“I always miss the part where you can, you know, communicate with students on the side, you actually see their expression, get instant feedback,” Liu said. “I want to see what makes sense to students and if we are in person, I get feedback right away.”

The University moved to the Guarded Risk posture on March 11, after spending about half the spring semester in the middle Elevated Risk posture. With students attending classes in person and from home, instructors have to consider both learning experiences as they teach. In order to allow students from home to see teachers, classrooms are equipped with a Zoom-enabled TV that shows remote students on the screen.

“Everyone is wearing masks very well and they just go to the seats labelled as available,”

Liu said. “When students come in, I do not need to remind them of it.”

University spokesperson Kevin Zwick said based on stable and falling case counts, strong compliance leading up to the decision and high capacity in isolation housing, Pitt determined that it was appropriate to move to Guarded Risk.

“We don’t expect a significant increase in the number of in-person classes as there is no difference between what is allowed under the two postures for instructional settings,” Zwick said.

“Certainly the peak that we had in the November, December, January period was sharply coming down. There’s no doubt about that,” Wenzel said. “Plus we were having an uptick in vaccinations … I think it’s really that combination of factors, and then warming up is probably the third factor and so people can do more things outdoors and you’re not limited to indoor gatherings.”

While the HCAG agreed that this month was a good time to loosen the restrictions, Wenzel said she is worried people might be misinterpreting what this change means.

“I’ve found that being in person actually makes me more focused than if I was on my own in my own apartment,” Xiong said. “It’s much harder to get away with being distracted and going on your phone.”

But not every student has the opportunity to go in person. To ensure everyone gets the same experience, even while the majority of her students are still online, Liu asked remote students their opinions after her first in-person organic chemistry lecture.

“They told me that compared to previously, the major thing that’s different is they can hear a little background noise from the classroom,” Liu said, “but other than that they think the lecture quality is pretty much the same as when we were remote.”

Nav Warraich, another one of Liu’s students, has to take the class online, as he is currently living at home in Michigan.

“I know that being able to meet the professors in person and see them face to face is pretty nice, but personally, for me, from an academic standpoint, it hasn’t made too much of a difference so far,” Warraich, a sophomore biology major, said.

For Emily Wiley, a sophomore classics and anthropology double major, the transition has been less smooth. Despite the in-person option, Wiley joined her Greek class remotely from her work. The class has only four students, but she was the only one calling in over Zoom.

“I was watching them do class. I wasn’t allowed to participate, I guess. I didn’t really know what was going on, I couldn’t talk in it or anything,” Wiley said. “For any class that’s like a lecture class that would be fine, it’s just that this is a class where you’re actively translating with other people. I went in person for the third class because the first two classes sucked.”

Jack Reynolds, a junior communications and film and media studies double major, said he has been able to go in person since late February. Reynolds said hybrid learning allows for flexibility in larger lectures, but he enjoys going in person for his smaller classes, like Elements of Audio and Intro to Radio Production.

“These two classes are pretty hands-on-style classes. They’re making things, they’re doing things. It’s a lot better to be able to be in person, get your hands on things, actually work on things,” Reynolds said. “Other classes, though, some of the classes that are more lecture, exam-style and not as much hands-on, it’s nice having more flexibility being able to bounce back and forth.”

Giuseppina Mecchia, an associate professor in the French and Italian department, said she has mixed feelings on the changes. Mecchia has had technical difficulties with sharing her screen with remote students over Zoom.

“Being back in the classroom has been overall a positive experience, but the vast majority of the students have not been back,” Mecchia said. “This forces us to adopt the hybrid model. This is sometimes a technical headache as different classrooms have different Zoom settings. I think that the students would also benefit from coming back, but many of them are just not on campus, or have schedules that don’t allow for commute time.”

Wiley said there are some interesting aspects to teaching in person that she didn’t expect.

“It was weird seeing them [classmates] in person, though,” Wiley said. “Some of them are a lot taller than I thought they’d be.”