‘Once in a generation investment’: Biden proposes new infrastructure plan in Pittsburgh 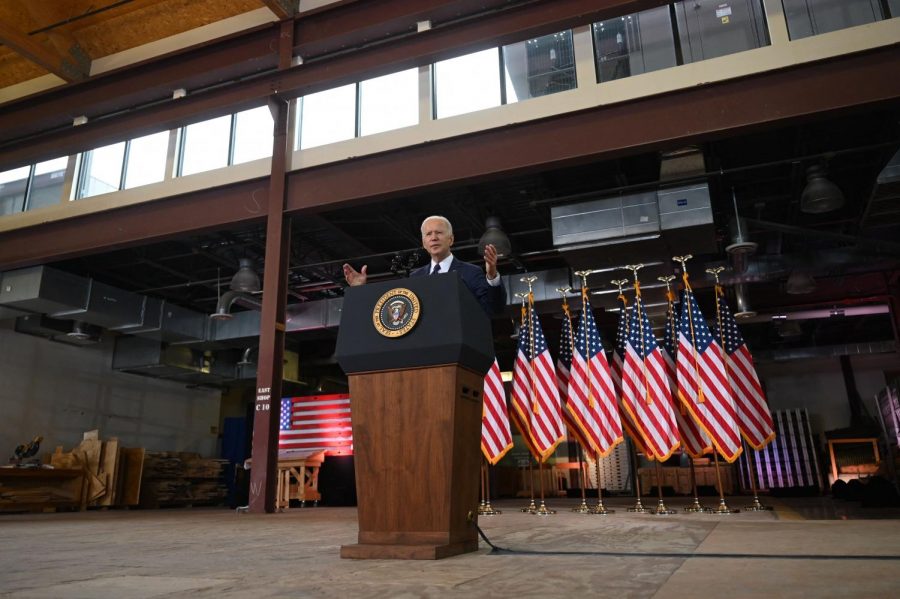 President Joe Biden said in a Wednesday speech that he returned to Pittsburgh, after starting his presidential campaign in the City two years ago, to help rebuild “the backbone of America” with a new infrastructure plan.

Biden laid out his $2 trillion American Jobs Plan at the carpenters training facility in Collier, located about 20 minutes west of Oakland, on Wednesday afternoon. He said this plan will help rebuild infrastructure and provide job opportunities, in hopes of stimulating America’s economy and decreasing federal debt. Biden last visited Pittsburgh on Election Night eve — accompanied by Lady Gaga — for a drive-in rally by Heinz Field. With a margin of about 80,000 votes from Pennsylvania, Biden secured the presidency against former President Donald Trump.

Key parts of the American Jobs Plan include modernizing infrastructure — such as roads, bridges and airports — replacing all of America’s lead pipes, making the internet more accessible and affordable as well as investing in “clean energy.” According to Biden, revitalizing infrastructure will “grow the economy” by creating new jobs and making transportation more efficient, which will make America a better global competitor against countries such as China.

Not only is this plan focused on infrastructure and clean energy, but Biden said the American Jobs Plan is going to “boost America’s innovative edge.”

“American Jobs Plan is the biggest increase in our federal non-defense research and development spending on record,” Biden said. “This is going to boost America’s innovative edge in markets for global leaderships up for grabs, markets like battery technology, biotechnology, computer chips, clean energy, the competition with China in particular.”

Out of the plan’s $2 trillion, $20 billion will go toward improving road safety, $85 billion to revamping public transit, $25 billion for airports and $17 billion for inland waterways, according to the White House.

Biden said by implementing these changes, this plan will help connect marginalized communities, so they can have better economic and job opportunities.

“Too often investments have failed to meet the needs of marginalized communities left behind,” Biden said. “There’s talent, innovation everywhere. And this plan connects that talent through cities, small towns, rural communities, through our businesses and our universities, through our entrepreneurs, union workers all across America.”

The American Jobs Plan is the second part of Biden’s overall “Build Back Better” program, which consists of the American Rescue Plan, American Jobs Plan and American Families Plan. According to the White House website, the Build Back Better plan’s goal is to “rescue, recover, and rebuild the country” by strengthening the economy and providing relief to underrepresented communities who have been disproportionately affected by the COVID-19 pandemic.

In order to pay for the American Jobs Plan, Biden said he wants to increase the corporate tax from 21% to 28%, which will bring in $1 trillion dollars in 15 years. Biden also said he wants to establish a 21% “global minimum tax” for American corporations, to “level the international playing field” and generate another $1 trillion within the next 15 years.

According to Biden, 91 Fortune 500 companies, such as Amazon, Starbucks and JetBlue Airways, did not pay a “single, solitary penny” in federal income taxes.

While the payment plan is a bold proposal, Biden said it is “fiscally responsible” to raise and establish corporate taxes, as it will pay for his plans while also decreasing America’s federal debt.

Biden said no one making less than $400,000 will see an increase in their taxes — dispelling worries that many Americans had throughout Biden’s campaign and presidency.

“I start with one rule — no one, I’ll say it again, no one making under $400,000 will see their federal taxes go up, period,” Biden said. “This is not about penalizing anyone.”

Biden said he is “open to other ideas” to raise funds, as long as they do not increase taxes for those making less than $400,000. He also said he will talk to Republicans to hear their perspective, and political “divisions” shouldn’t stop the government from “doing the right thing for the future.”

“The divisions of the moment shouldn’t stop us from doing the right thing for the future,” Biden said. “I’m going to bring Republicans into the Oval Office, listen to them, what they have to say and be open to other ideas.”

Biden said America should join together to carry out his plans for a better future.

“We can do this, we have to do this, we will do this,” Biden said. “We just have to remember, this is the United States of America, and I’ve said it a thousand times, there’s nothing beyond our capacity if we act together. So it’s time to move together.”