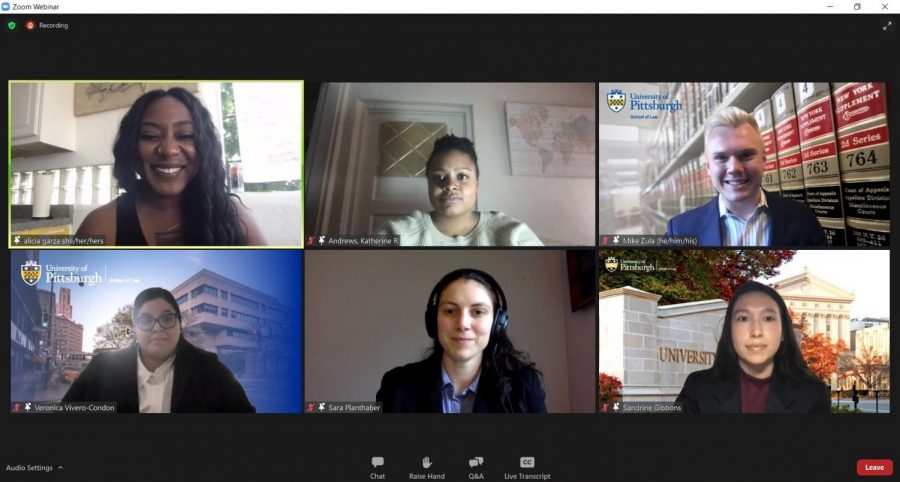 The Office of Equity and Inclusive Excellences hosted Alicia Garza, the co-creator of the #BlackLivesMatter Movement and the Black Lives Matter Global Network. During the event, Alicia Garza touched upon her experiences founding the movement, her current work maintaining diversity and equal access and her book “The Purpose of Power: How We Come Together When We Fall Apart.”

Alicia Garza said the Black community should be represented in all facets of society and have their skills highlighted more often. Garza uses the phrase “Black Lives Matter,” a term she helped coin, to lift up the Black community all across the world.

The Office of Equity and Inclusive Excellence in Pitt’s law school hosted Garza, the co-creator of the #BlackLivesMatter Movement and the Black Lives Matter Global Network, on Thursday evening. During the event, Garza touched upon her experiences co-founding the Black Lives Matter Movement, her current diversity and equal access efforts as well her book “The Purpose of Power: How We Come Together When We Fall Apart.”

Garza, Patrisse Cullors and Opal Tometi co-founded the #BlackLivesMatter Movement in 2013 in response to the acquittal of George Zimmerman — the man who fatally shot Trayvon Martin, an unarmed Black teenager. According to their website, the mission of the Black Lives Matter Global Network Foundation is to eradicate white supremacy, combat acts of violence against the Black community and create a space for Black innovation. The movement reached a new level of influence in 2020 following weeks of nationwide protests after George Floyd’s killing at the hands of a Minneapolis police officer.

Garza said as a young child, she believed she had missed the chance to stand up for her people and fight for freedom. In an effort to remember and embody the vision of Black leaders in history, she had the desire to bring back the fight for equality for the Black community.

“Growing up, I thought that I had missed out on the moments in history when Black people rose up to break the chains of our oppression,” Garza said. “I grew up learning about the last period of civil rights — The Freedom Riders, the lunch counter sit-ins and the Black Power Movement. But when I looked around, I saw no remnants of what had once been, and I vowed to work hard to make it reemerge.”

Garza said her mother taught her an important lesson about accumulating power. She said she’s used this lesson to help build organizations, such as the Black Lives Matter Movement, Supermajority and National Domestic Workers Alliance.

“My mother taught me the most important lessons in organizing and building power, which is that at the heart of it all is dignity and survival,” Garza said.

Garza said every Black person has a different idea about what freedom is, but most know that the current system is set up for Black people to fail.

“I’ve spent many hours in my life, knocking doors, sitting on porches and at kitchen tables, while listening to another Black person describe their freedom dreams to me,” Garza said. “We tell each other the things that we are afraid to say out loud, that maybe the way things are set up, aren’t the way things have to be and that we know things were set up this way for us to fail.”

Garza said her “freedom dream” is to build a world of true equality where all people can work together.

“In my freedom dreams, we are building a new world where none of us gets left behind,” Garza said. “A world where our relationships to each other, and the planet, are nurtured in nurturing a world where the way we come together is not predatory or parasitic, but instead, cooperative and interdependent.”

Katherine Andrews, a second-year law student and president of the Black Law Students Association, asked Garza how she came up with the iconic “Black Lives Matter” phrase. Garza responded that the initial use of the phrase was simply a social media post.

“I literally just wrote a post on Facebook, and I did not think to myself that it was going to go viral, that Black Lives Matter was going to be the thing,” Garza said. “When we decided to try and figure out how we connect with people online who are fired up, upset, pissed off, we used Black Lives Matter, as a simple and also complex way to describe what we were fighting for, and to describe what the problem is.”

Andrews said this event helped relate to her own personal experiences, and she felt heard and represented through Garza’s words.

“I related to what Garza said in her book to my own personal experiences when she talked about realizing your Blackness and seeing yourself as an outsider in white society, and it makes me wonder how we can further mobilize other cultures to have access to the Black community so we don’t feel like outsiders,” Andrews said.

Veronica Vivero-Condon, a first-year law student, said being from the Latino community, she has noticed a lot of “friction” between the Black and Latino communities. She said she hopes to locally organize these groups to cooperate and work with each other.

“In my experience, where I’m from the Latino communities and the Black communities have a lot of friction between them but there’s power in numbers, and if those two communities could come together, there would be so many more benefits to us all,” Vivero-Condon said.

Garza said the Black community has to continue to fight to obtain their freedom dreams one day.

“Black communities are innovators, creators, visionaries leaders, builders, fighters and winners, not because it’s inherent within us, but because we have had to be,” Garza said, “When our lives are shaped and determined by rigged rules that leave us out and leave us behind we have to find a new way, because we have to survive.”