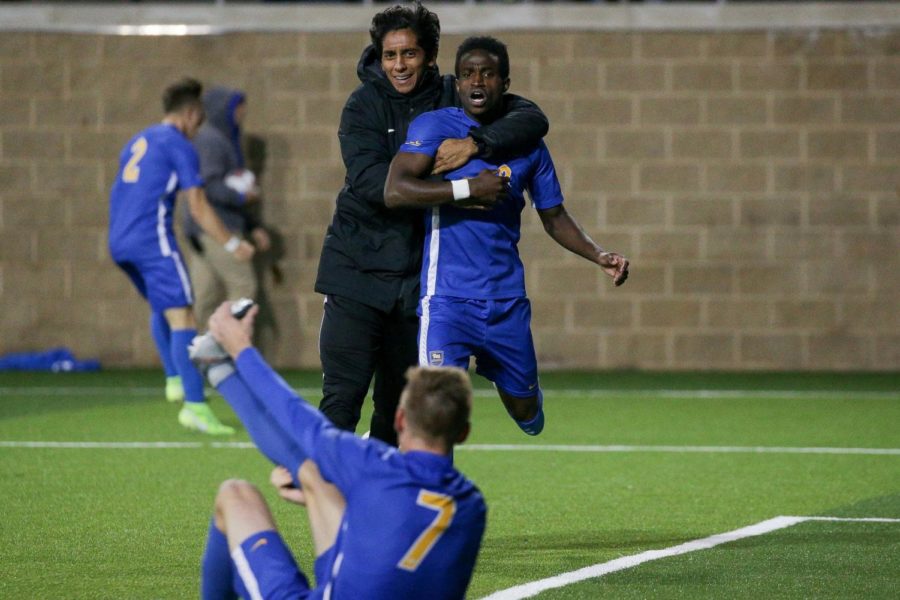 No. 3 Pitt men’s soccer extended its win streak to four with a convincing 2-0 victory over Notre Dame on Saturday night.

No. 3 Pitt men’s soccer extended its win streak to four with a convincing 2-0 victory over Notre Dame at Ambrose Urbanic Field on Saturday night. The Panthers improved to a record of 12-2, while the Fighting Irish fell to an even 8-8.

The Panthers entered this game having won both of their games against the Fighting Irish in the fall season, each by a score of 3-1. Once again, the normally solid defense of Notre Dame stood no match for the high-powered Pitt attack.

The Panthers controlled possession early, but struggled to produce any truly threatening chances, generating zero shots and just one corner in the first 13 minutes of play. They won’t remember their first shot fondly, as star sophomore forward Valentin Noel hit the post on a point-blank opportunity in the 14th minute.

Pitt quickly produced another quality chance in the 16th minute when first-year midfielder Filip Mirkovic fired a beautiful shot just high of the crossbar. The Fighting Irish answered with a dangerous chance of their own in the 21st minute, when a shot from junior forward Jack Lynn rattled the inside of the post and just barely rolled out.

While Pitt edged Notre Dame in possession for the remainder of the first half, and built up a few good looking attacks, it failed to culminate any of its chances into a quality shot. The only shot on target for either side in the first half came from Pitt senior forward Alexander Dexter’s 32nd-minute header, which floated into the hands of Notre Dame goalkeeper Bryan Dowd.

Pitt head coach Jay Vidovich entered the break pleased with how his team controlled play and spread out the Notre Dame defense.

“Overall, I thought the guys just did a good job of putting them under enough pressure that we won the next ball, and then we were able to keep it,” he said. “Then, we were able to spread them out, and after about the first 15 or 20 minutes of the game when we settled it down, we were able to move them quite a bit.”

However, the Panthers remained scoreless after the first 45 minutes of play. Vidovich cited a simple lack of aggression as the main reason for their lack of chances.

“In the first half, we thought our defending was too passive,” he said. “On attack, we got a hold of the ball, but we didn’t try to damage them. We didn’t try to go to goal enough.”

The Panthers, who possess the highest-scoring offense in the ACC, aggressively sought to put the first goal on the board early in the second half. It did not take them very long.

After withstanding a Notre Dame attack to open the half, the Panthers got on the counterattack. Star first-year forward Bertin Jacquesson flew down the sideline to set up a corner kick for Pitt in the 48th minute. Noel crossed the ball into the box to the feet of sophomore defender Arturo Ordonez, who found the back of the net on a shot that deflected off a Notre Dame defender.

With a 1-0 lead, Pitt continued to control the game and press the Fighting Irish, but Dowd remained solid in goal. Pitt sophomore midfielder Veljko Petkovic orchestrated some brilliant attacks, but the Panthers could not quite capitalize. Still, Vidovich praised the play of his star center midfielder after the game.

“I thought he was fantastic,” he said. “The brilliance of his touch several times at midfield to push people through, and to go on the dribble, were very good.”

Pitt found another opportunity on the counter off a Notre Dame free kick in the 76th minute. Petkovic laced a long pass to Dexter, who clinically finished the breakaway opportunity to put the Panthers up 2-0, ultimately the final score. While the Fighting Irish searched desperately for a way back into the match, the Panthers held strong.

Vidovich stressed the importance of assertiveness during the halftime break, and his team responded in a big way throughout the second half of play.

“I thought in the second half, we were just more assertive,” he said. “We tried to push up higher, we tried to get the ball out quicker and go to goal at them a lot quicker.”

Play got particularly chippy in the final 15 minutes of the match, but physicality remained a theme for the entire time. There were 24 fouls called — 16 on the Panthers and four yellow cards distributed in the game. However, Vidovich did not view the level of physicality as anything abnormal.

“I think it’s something that’s just the nature of the ACC,” he said. “It’s the best, it’s very athletic, it’s very competitive, that’s the nature of it, and the players are smart enough to take what they can get from the referee.”

Pitt improves to 4-1 in the spring season, and 12-2 overall. They will look to extend their win streak to five games in a home game against Virginia at 7 p.m. on Thursday, which will be the final game of the regular season.