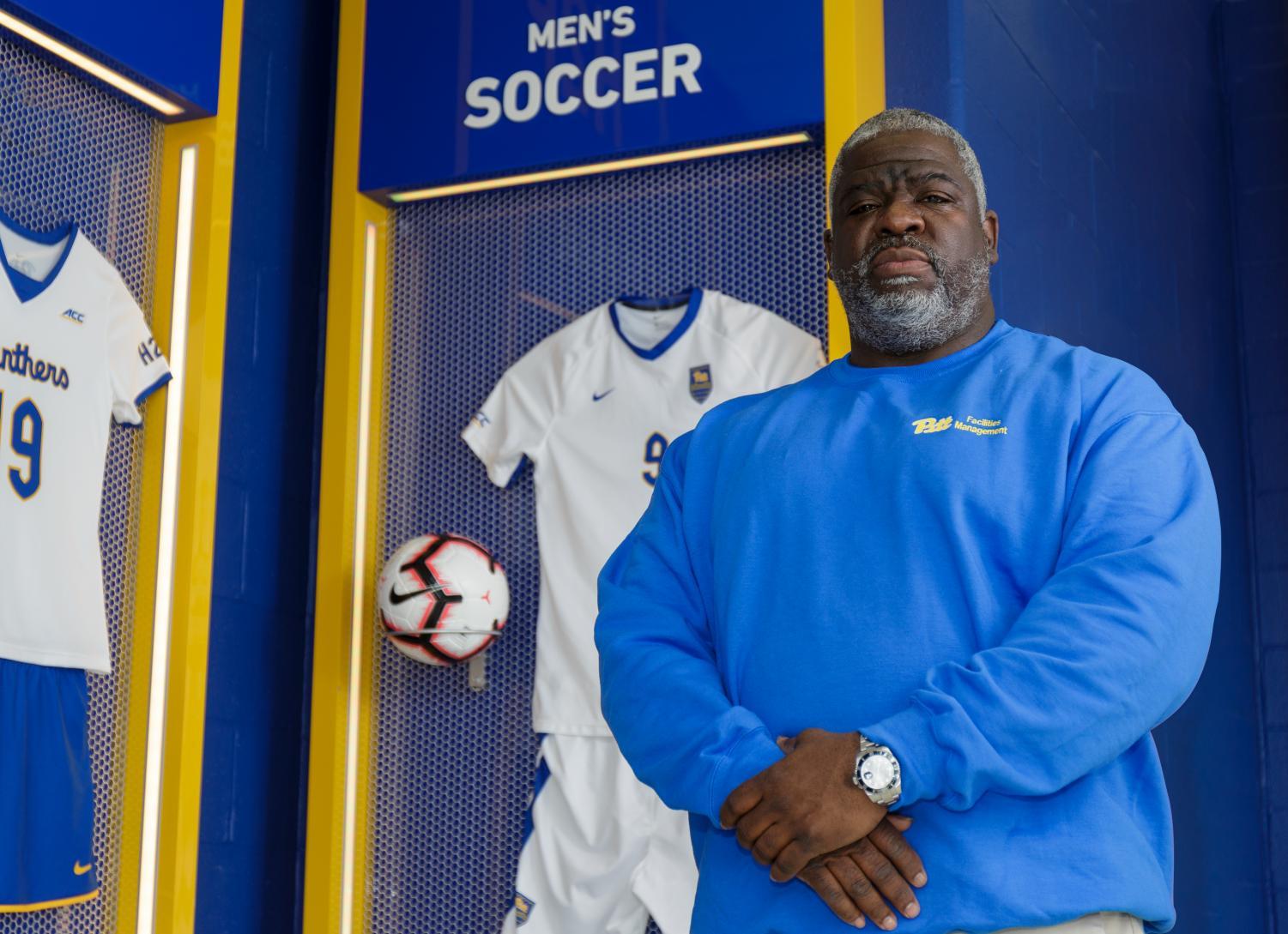 When Pitt hired Jay Vidovich to lead its men’s soccer program in 2015, it didn’t take long for the highly touted head coach to get comfortable on the pitch. But new to the Steel City, Vidovich needed a tour guide, and, fortunately for him, he found one in custodian Lance Aiken Sr.

Aiken now enthusiastically refers to Pitt head soccer coach Jay Vidovich as his “guy.” Vidovich said Aiken immediately helped him find his footing and get settled in the Pittsburgh area upon his arrival.

“I just thought he was a good guy, helpful, good person,” Vidovich said. “You could tell already he was a people person. I think I also felt like he already had a pulse on everything that was going on over here with all the teams and the kids.”

Although he began working in the Petersen Sports Complex at about the same time as Vidovich, Aiken had lived in Pittsburgh since 1993. He grew up in Buffalo, New York, where he had called home his whole life until he got laid off from his job at Buffalo General Hospital that year. Needing to provide for his son, he quickly grabbed an open custodial position at Pitt, a school he had grown familiar with while his brother, Curtis, played basketball there.

The determined Aiken came in with the intention to maintain a steady income and support his family, which the opportunity in Oakland presented. He didn’t expect that he’d still be here 28 years later, with no intention of ever departing the Steel City.

As Pitt Athletics has undergone changes in staff, facilities and athletes, Aiken has remained. When he first arrived at Pitt, the athletics department assigned him to work at Pitt Stadium. The venue was demolished in 1999, and he began working in Trees Hall, where he mostly cleaned the Pitt swimming facilities.

He went on to maintain the Graduate School of Public Health, Fitzgerald Field House, the chancellor’s office in the Cathedral of Learning and the School of Dental Medicine. Finally, Aiken settled back into athletic facilities, where he’s remained for the past six and a half years. He’s cleaned “just about every sport’s locker rooms” in his time here.

“I’ve covered them all,” Aiken said.

Members of the Pitt community said they have appreciated Aiken’s time and work in Pittsburgh. The impact he’s made from countless positive interactions extends from the people inside the Petersen Sports Complex, which Aiken maintains every day, to the peak of Pitt Athletics in Director of Athletics Heather Lyke. Aiken said he missed one of Lyke’s recent visits, and she noticed while going through COVID-19 protocols.

“Heather Lyke, the AD, they have to sit and do temperatures, and I was on vacation,” Aiken said. “I came back and somebody said Heather was looking, wondering where [I was] because normally they see me — happy-go-lucky Lance.”

Aiken now handles all of the daytime cleaning for the Petersen Sports Complex, home to Pitt’s baseball, softball, soccer and lacrosse teams. He arrives at the facility at about 7 a.m. every day, where he prepares the 12-acre complex for use in the coming morning. These responsibilities include laying down salt when it snows, scrubbing showers and bathrooms and running the walk behind machines, as well as sanitizing all touch points.

With only one other custodial worker in the building — who works the night shift — it may seem like a lot for one person to handle. But Aiken says he enjoys working alone. He doesn’t have to rely on any coworkers to get the job done the way he wants it, and both athletics staff and athletes provide all of the company he could ever need.

He said he feels a particularly upbeat atmosphere in the building when one of the teams gets an impressive win, mentioning that Pitt baseball’s recent sweep of Florida State even improved his own performance.

“They win a big game like that, I clean better, believe it or not,” Aiken said. “Everyone’s smiling and talking, then it moves on and they gotta get ready for the next one. It doesn’t last too long.”

As the contact person for the players and staff with any concern about the facility throughout the day, Aiken has embraced the countless interactions he has with everyone in the complex. His supervisor, Earl Vojtash, said everyone can count on Aiken to brighten up any day.

“He’s very professional with his work, his personality, [he] goes above and beyond his occupation and cares so much for not just me and Pitt baseball but for every sport Pitt has to offer,” West said. “Anyone who comes in contact with him, no matter how their day has gone, immediately feels even better.”

Athletics always felt like the right fit for Aiken, who played basketball for Burgard Vocational High School in Buffalo. He takes great pride in the success of Panther sports teams, and works overtime at the sporting events at the facility so he can catch the teams’ games.

While his typical work days end at about 4 p.m., Aiken usually works as late as midnight on gamedays. Before the event, he sets up tables and cleans the press boxes and visiting locker rooms. He usually monitors the bathrooms during the game, allowing him opportunities to catch the action on the field between checks. His favorite team to watch by far is men’s soccer — a sport that he used to never pay attention to, but now calls “electrifying.”

“I got a hell of a lot of respect for those guys that play soccer,” Aiken said. “I didn’t care about soccer or softball, but now I’m into it. But I like soccer the best.”

That affinity for the pitch stems from some of the relationships he’s built with the soccer staff. Vidovich said the two quickly got to know each other, aided by a mutual respect for each other’s work.

Aiken also serves as a mentor to the athletes, and his advice became especially useful during one situation with a young soccer player. Vidovich said the young man had lots of talent, but also had some behavioral issues, and Aiken helped the coach see the player’s perspective after a questionable incident during a match.

“The first thing Lance did was he came over to me and said, ‘Let him enjoy the win, enjoy the win and don’t kill him,’” Vidovich said. “Kind of just like, ‘Be patient there.’”

Aiken’s connection to the soccer team has given him an opportunity to interact with athletes from around the world, as both the men’s and women’s rosters recruit heavily outside of the United States. He said he hasn’t had a language barrier issue with the players from abroad, but has noticed one difference between them and the American-born students.

Aiken’s favorite memory from his time at Pitt came at a nearly sold-out soccer game. He couldn’t remember which game it was, but Aiken said so many excited fans surrounded the team that a group of employees had to form a “human fence” to get the team from the locker room onto the field. Amid the chaos, Aiken turned to his right and couldn’t believe who stood next to him as part of the chain — Chancellor Patrick Gallagher.

“It was just amazing that I saw him right next to me,” Aiken said.
Those small details from his everyday interactions are Aiken’s favorite part of the job. He often calls former athletes completely out of the blue on any given day, checking how they’re doing in whatever phase of their work or athletic career they currently face.

“Anytime I can see someone further their education, I’m happy. Get a good job, I’m happy,” Aiken said. “Anything these kids do — new car, you name it. I’m happy for them. It makes me happy to see it. They come back, they visit me: ‘Where’s Lance?’”

Aiken said the appreciation the players show for him makes the job worth it, forming connections that last well beyond their four years at Pitt.

“It means the world, it makes me wanna come. It’s a great thing,” Aiken said. “Because they appreciate you more. Something’s wrong, I take care of it.”

West said he doesn’t think Aiken realizes the profound impact he has on the players he interacts with, including the impact he had on West himself. The professional pitcher said he’ll never forget the memories of Aiken repeatedly asking him about his day, how his injury rehabilitation went and reminding him that he “was going to make it.”

“My first couple years at Pitt weren’t easy, and it would have been easy to think negatively,” West said. “But Lance just being who is, someone who was willing to talk and crack a joke here or there, and someone who always checked in on how I was doing felt great. And I’ll forever be thankful for him.”