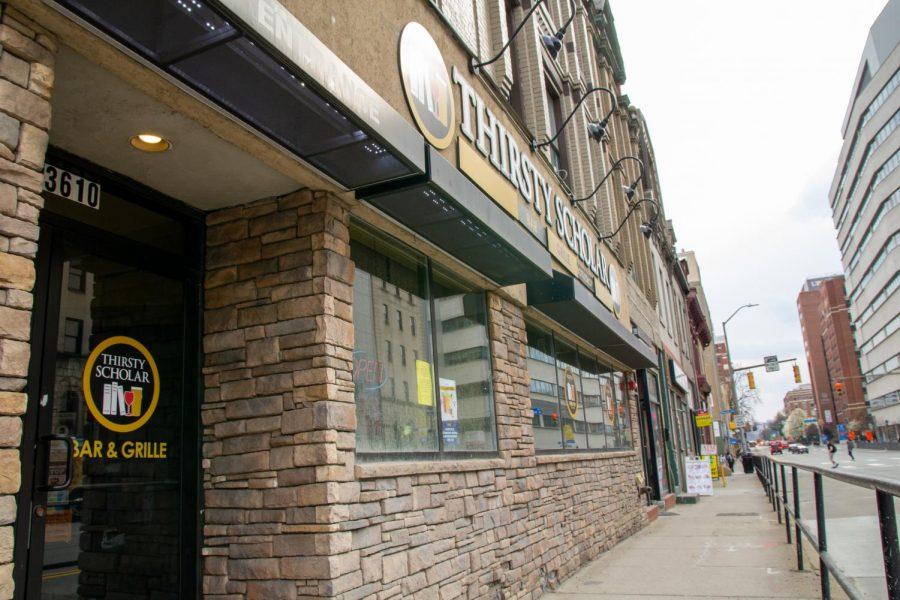 Thirsty Scholar Bar & Grille is located on Fifth Avenue. According to manager JoAnne Chizmar, Thirsty Scholar originally opened in-person dining in August, then shut down in December and reopened on Jan. 13.

For Gene Ney, the owner of the South Oakland bar Gene’s Place, April 4 was an exciting day. Ney, a Pitt graduate and part-time professor at Carlow University, can now allow customers to sit at the Louisa Street bar once again.

Oakland restaurants and bars, along with other businesses statewide, were allowed to relax some COVID-19 restrictions following a state rule change that began Sunday. Alcohol service in bars and restaurants is once again allowed without the purchase of food and indoor dining capacity has been raised to 75%.

Many business owners like Ney have had to adapt to restrictions over the past year, through means such as increased takeout availability and cocktails to go.

Ney said he is thankful that the majority of customers are cooperative and understanding with their updated business hours and take-out services.

“I have to admit that all of the Pitt students who frequent my establishment have been very good about observing mask and social distance policies,” Ney said. “In fact, University of Pittsburgh students have been extremely cooperative.”

JoAnne Chizmar, the manager of the Thirsty Scholar Bar & Grille, said she has been making small changes while continuing to open the business so she and her husband can safely run the Central Oakland bar.

“We originally opened in-person dining in August then shut down in December and reopened January 13th,” Chizmar said. “Most of our staff graduated after the March shutdown of 2020. We weren’t sure what to expect when we reopened so we decided to keep everything as small as possible and not hire new staff.”

Chizmar said they have made additional changes regarding the menu so they can minimize food waste.

“We also streamlined our menu so that we could cut down on food waste since we are following shorter hours and only open four days a week,” Chizmar said. “Thankfully, everybody was very understanding about what we are trying to do.”

Lailanie Chen, who owns Hunan Bar on Atwood Street with her husband Wei Fei Chen, said the restaurant was greatly impacted by the pandemic as the majority of their customers used to be  international students.

“Pre-COVID, a majority of our customers were international students from China, since we specialize in very authentic traditional Chinese food,” Chen said. “Since the beginning of the pandemic, our business got hit really hard and we had no choice but to partner with a third-party company for delivery and takeout, which we never had to do before.”

Chen said her family has been working hard throughout the pandemic and never shut down the restaurant, continuing delivery and takeout orders.

“We never closed and even during the time when we weren’t able to do dining service. Instead, we stayed open for takeout and delivery only,” Chen said. “We have had to use less employees only because the majority of our sales right now are still takeout and delivery, even though [a small capacity of] dining is available.”

Though their business is running small during the pandemic, Chen said her restaurants had very minimal issues with the community following the restriction guidelines as well.

“We never had anyone causing trouble regarding the guidelines. Also we don’t have any problem with students crowding and [everyone is trying their best] to keep [the community] safe,” Chen said. “I believe that the Oakland community is keeping us all safe especially with signs on sidewalks and signs for guidelines to remind students out there.”