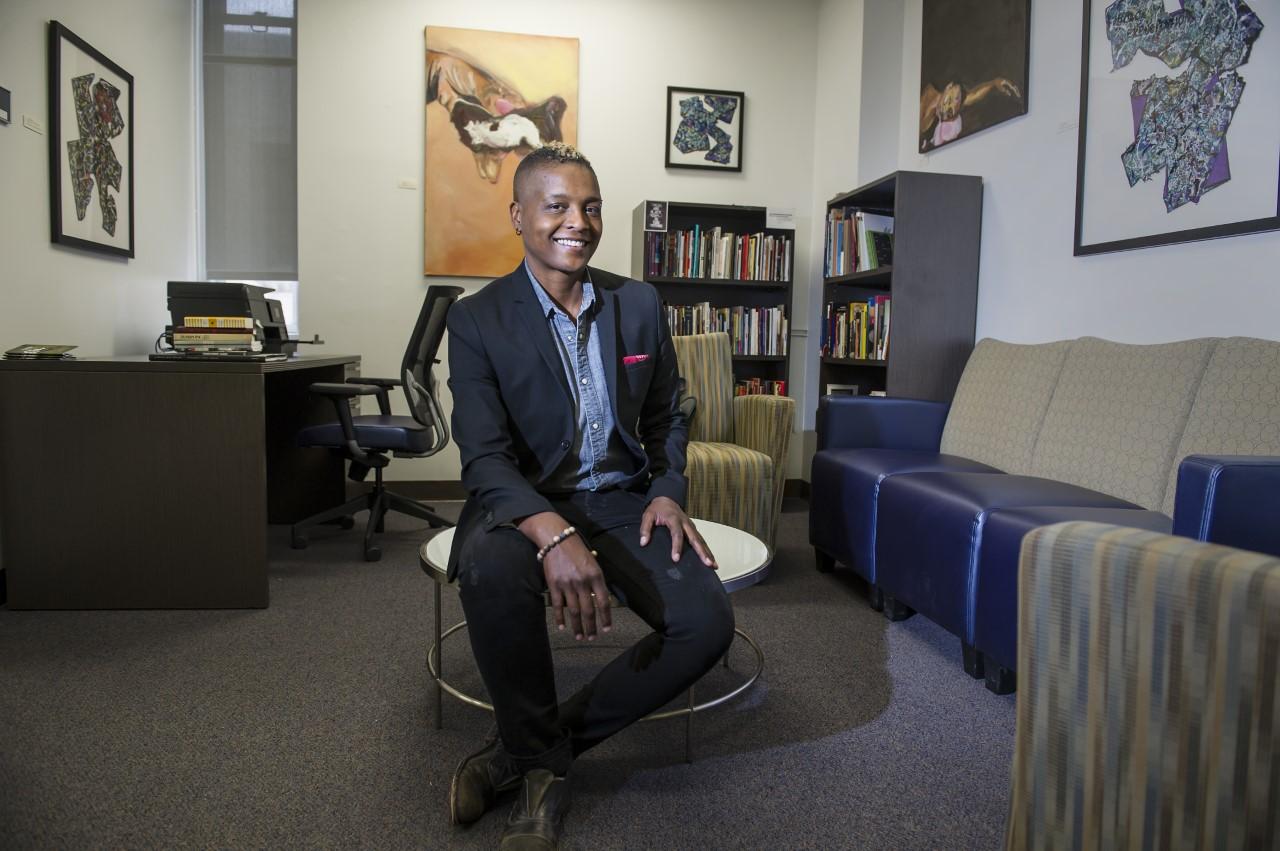 Poet, essayist and video artist Dawn Lundy Martin has always been a writer.

“As a child what drew me towards writing was reading. My mother read to me a lot when I was very young, until I could read myself. Then I just picked up where she left off,” Martin said. “I’ve always been deeply interested in the power that literature has to transport the imagination.”

She began writing poetry in high school, but was catapulted into the craft more seriously at the University of Connecticut. After winning UConn’s most prestigious — and only — poetry award, the Wallace Stevens Award, she was hooked.

“It didn’t really feel like it was going to be a career. It just felt like something I was deeply compelled to do,” Martin said.

While she may not have imagined it as such, her passion for poetry would soon spiral into an illustrious career spent telling stories and empowering others to do the same. This compulsion has continued to drive her work across various mediums of activism, poetry and education.

The author of four books, Martin’s work has appeared in The New Yorker, Ploughshares and “The Best American Essays 2019,” and has earned the Kingsley Tufts Poetry Award, LAMBDA Literary Award for Lesbian Poetry and the American Academy of Arts and Sciences’ Sarton Prize for Poetry. Currently a lecturer in Pitt’s English department, she writes about race, justice, the body, queer identity and humanity.

As these topics soared to the forefront of American politics over the past year, Martin felt compelled to carry on writing, despite the devastating events unfolding before her.

“My work has always been about looking directly at the world, especially the sociopolitical world,” she said. “I’ve been writing for years about the murder of Black people, about the surveilance of Black bodies. This has always been my work, so this particular moment just gives the work more urgency for me.”

This examination of the sociopolitical world manifests in a multitude of forms — poetry, essays, video, teaching and activism.

She co-founded the Third Wave Foundation — now called the Third Wave Fund — in 1992 in the wake of galvanizing events like Clarence Thomas’ Supreme Court confirmation, the Rodney King trial and subsequent Los Angeles riots and William Kennedy Smith trial. At the time, it was the only young feminist activism foundation in the country.

In her 15 years with the foundation, she worked to help fund organizations fighting for the environment, prison reform and reproductive rights through grant-making campaigns.

“As a queer person, it was really important to me to make sure that the feminist work also focused on queer activism,” Martin said. “We were one of the first organizations to make sure that we had trans leadership and to ensure the language around trans identities were included in our mission and in our work.”

She’s since taught at Montclair State University, The New School and Bard College before becoming the Toi Derricotte Endowed Chair of English at Pitt. Here she co-founded the Center for African American Poetry and Poetics in 2015, focused on furthering “poetics of engagement.”

“Poetics of engagement means being a witness to the world around you. Instead of attempting to use your art as an escape, it means look at the conditions around you that produce inequality,” Martin said. “It is a poetics of, not only witness, but interaction.”

Now serving as CAAPP’s director, Martin's work allows others at the University to incorporate these concerns into their writing. Mark Kramer, a lecturer in Pitt’s English department, consistently sends his students to CAAPP programs in an effort to include Black voices and innovations as a part of his curriculum.

“I’ve had my writing students attend CAAPP programs because I felt they’d be exposed to thoughts and techniques that’d help them approach their own thinking and craft in new ways. I wanted my students to gain new perspectives and in turn apply some of what they’d heard and read to their own writing,” Kramer said. “Too often Black voices and authors aren’t centered in our discussions about writing and art. CAAPP programs have helped make a recentering start to happen in our department and throughout the University.”

Amid the pandemic, the Center has continued to create engaging programming to further its students’ artistry. Its event “Collective Protest and Rebellion: A CAAPP Black Study Intensive,” held last September, featured incredibly influential figures such as poet Lyrae Van Clief-Stefanon, visual artist Zun Lee, Yale scholar Emily Greenwood and more. The event has since amassed more than 7,000 views on YouTube.

Steffan Triplett, interim assistant director of CAAPP, explained that this programming has succeeded in not just keeping the Center going amid the pandemic, but also expanding its reach. He said Martin’s “artistic vision and intellectual generosity” have driven CAAPP’s success.

“CAAPP has continued its goals of providing programming for both the University and the Pittsburgh communities, and we’ve really taken advantage of the virtual norms of the moment to expand our programming to an even wider public, reaching viewers across the globe,” Triplett said. “Dawn is open to letting collaborators help shape what programming looks like and is always interested in doing something different than how we did it before. Dawn keeps things fresh and is always advocating for work that is avant-garde and cutting-edge or new and weird.”

But it’s not just the programming that changes as a result of the pandemic — Martin explained it’s the art itself.

“I can’t predict the how but I can predict that [the arts] will change … It puts this pressure on creative artists to do what we do. When you have this constraint, it allows us a kind of freedom,” Martin said. “A different kind of creativity happens that you couldn’t have happened without this horrific restraint.”

For Martin, this newfound creativity has manifested in various innovations at CAAPP or virtual readings. But she’s not immune to the pressures of the pandemic.

“It’s an oscillating, evolving artistic exploration for me. It’s hard to engage your work in a way that feels authentic when interior space is affected by the weight of all the loss and death around the world,” Martin said. “One of the things we were trying to do last semester at CAAPP was trying to create an environment that felt like it still had a sense of intimacy, even though it was online.”

Through all of her work — activism, authorship, mentorship — Martin aims to create a space to which young artists can turn to process not only the pandemic, but their personal heartaches.

“All of us have personal traumas and experiences that are extremely difficult to grapple with. Creativity helps us to survive and to grapple with those experiences, whether it be poems or novels or sculpture or theater,” Martin said. “Some [students] go on to become creative artists, but I hope others have this tool to process their life experiences with.”

According to Triplett, Martin has helped countless students and artists address these experiences in exciting, creative platforms.

“Dawn is brilliant,” Triplett said. “Dawn’s work is revered in the poetry world and her teaching is equally impactful. Her vision for CAAPP helps us all become better creatives and citizens. My students are exposed to a richer literary and artistic landscape because of the work that Dawn does in the writing program and for CAAPP.”

Whether online, in the classroom or on the page, Martin pursues this work to create an environment in which young people feel empowered to create and to authentically share testimony, just as she has done for decades.

“I really want to help usher artists and poets into the world,” Martin said. “I really like teaching Intro to Poetry because often the students don’t know that they’re really great poets and sometimes those folks go on to graduate school, to publish books and write poems.”

“I always think about in the 1970s, when so many of our friends were dying of AIDS. It, too, was an enormous plague and emotional devastation, but you know, some of the greatest art works, pieces of literature, plays came out of that devastation,” she said. “I think the same thing will happen. When we can return to the fields that have been devastated by the pandemic, the work that is produced will probably be some of the greatest in history.”