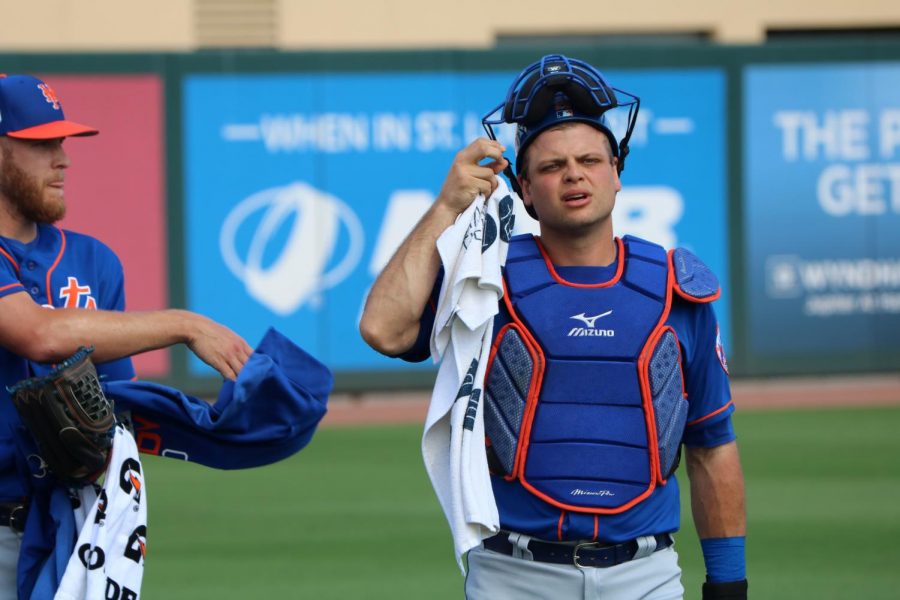 For former all-star catcher Devin Mesoraco, the Pittsburgh area has always been home. After spending almost a decade playing in the majors, Mesoraco has returned to western Pennsylvania as a volunteer assistant coach with Pitt’s baseball team.

Pitt head coach Mike Bell was pleased to bring Mesoraco into the program last September, believing he would offer a valuable perspective considering his illustrious background.

“We are extremely excited and very fortunate to welcome Devin to the Panther family,” Bell said in a press release. “His knowledge and experiences will be a great asset to the development of our student-athletes.”

Mesoraco’s impact on the Pitt program has become immediately evident. His extensive experience at the highest level has rubbed off on players such as first-year catcher Jackson Phinney, who said he has benefited greatly from working with Mesoraco.

“We learn so much from him,” Phinney said, “It’s just awesome to have him around. He knows literally every in-and-out of the game and every aspect of the game he just helps you get better at.”

While unfortunate luck with injuries caused his Major League career to be cut short, Mesoraco’s new life as a coach, mentor to young players and family man has been a welcome transition.

Mesoraco grew up in the borough of Punxsutawney — a town known for little more than an eccentric holiday and its corresponding Bill Murray film, “Groundhog Day.” But for Mesoraco, the small town 80 miles northeast of Pittsburgh is where he developed his love for the game of baseball and still calls home today.

He was introduced to the sport through his father, a longtime local coach who always brought Mesoraco along to games and practices with his various teams.

“I was always the bat boy or would throw and catch with whoever,” Mesoraco said. “I was always at the field.”

Mesoraco’s early introduction to the game spawned a lengthy playing career in which he would see the highest of highs and lowest of lows.

Prior to his professional career, Mesoraco enjoyed immense success as a catcher while attending Punxsutawney Area High School, where he still holds school records in career home runs, runs scored, stolen bases and walks. He was named the Pennsylvania Gatorade Player of the Year in 2007 and led Punxsutawney to the PIAA Class AAA State Championship the same year.

Mesoraco left the Pittsburgh area and bypassed a collegiate career after being selected by the Cincinnati Reds in the first round of the 2007 Major League Baseball draft. While his career in the Reds’ farm system got off to a slow start, Mesoraco eventually found his stride and was called up to the majors in September 2011.

During his second season in the majors in 2013, Mesoraco earned the everyday catcher position for the Reds — setting himself up for a breakout campaign in the following season.

Despite finding himself on the injured list twice with nagging oblique and hamstring injuries in the early part of the 2014 season, Mesoraco saw a dramatic jump in production from the previous year. Mesoraco hit .273 and slugged 25 home runs over the span of 114 games in his breakout campaign. He was one of four catchers to represent the NL in the All-Star Game and finished 21st in the NL MVP voting.

The Reds inked Mesoraco to a four-year contract extension worth $28.5 million in the offseason of 2014-15. After his rapid ascension, Mesoraco was primed to cement himself amongst the elite players in the game.

But just 23 games into the 2015 campaign, Mesoraco could feel that something was off.

“I could just tell that something wasn’t right with my hip,” Mesoraco said. “I could barely get into a crouch without having pain.”

Mesoraco was primarily limited to pinch hitting duties due to his lack of mobility behind the plate in 2015 and would miss the remainder of the season after undergoing surgery on his labrum. He also hurt his shoulder in early 2016 and missed additional time. When he went to get a diagnosis, the doctors thought it would be wise to look at Mesoraco’s other hip as well — which also showed significant damage.

While the hip injuries were hindering at the time, his left shoulder evolved into a chronic issue for Mesoraco — especially when it came to his swing.

“To me, the shoulder was the biggest problem going forward,” Mesoraco said. “It just never felt the same as what it did pre-surgery.”

Mesoraco lost yet another season to injury in 2017 due to a broken foot and was traded from the Reds to the New York Mets during the 2018 season. Between the two teams, Mesoraco would bat .221 in a combined 84 games.

After being told by the Mets that he would be fourth on the depth chart at the start of 2019, Mesoraco opted to hang up the cleats instead of awaiting an opportunity in the minors — the game he once loved had lost the effect it once had on him.

“It just became not a whole lot of fun,” Mesoraco said.

Following his retirement, Mesoraco took a year to decompress and unwind from the extensive wear-and-tear that he endured while playing professional baseball. He, his wife and young son went around the country on vacations in their new RV and saw eight national parks from coast to coast.

When his travels concluded, Mesoraco was searching for something in which he could invest himself. After eight years of dedication to one aspect of life, the former catcher was on the search for another.

“You kind of need something to devote your time to,” Mesoraco said. “Something to try to be good at.”

Mesoraco found that something in coaching — following in the footsteps of his father.

Mesoraco and his family moved back to the Pittsburgh area a year prior to his arrival at Pitt and has always maintained a close connection to the region. Between Mesoraco’s full-time return to his hometown and desire to remain involved in baseball, Pitt was the perfect fit.

Former catchers becoming managers and coaches has become commonplace in the baseball world at all levels. The position offers a one-of-a-kind perspective on the game since catchers have to not only field their position and hit, but also communicate calls to the defense throughout the course of the game.

“I feel like I got a little bit of everything,” Mesoraco said. “I felt like I could relate to just about anybody out there. If a pitcher is struggling, I could think back to something maybe Mike Leake did when he was struggling.”

While Mesoraco works on the practice and preparation of catchers leading up to games, his position within the coaching staff is fairly dynamic, as he also assists with the hitters and pitchers as well.

“I think that I’m in a somewhat unique position where they just let me jump around,” Mesoraco said. “So I’ll help out with the hitters when that time comes. I also help out with [the pitchers] quite a bit with Coach Bell and I definitely enjoy that aspect too.”

On top of his role with the program, Mesoraco says working with the Panthers has also been a great fit thanks to the flexibility of the job, which allows his involvement in baseball while still giving him time to enjoy his life at home.

“Pitt is a great situation and I would love to be here for quite a lot of time,” Mesoraco said. “My primary job is to go to practice, come home and be a dad.”