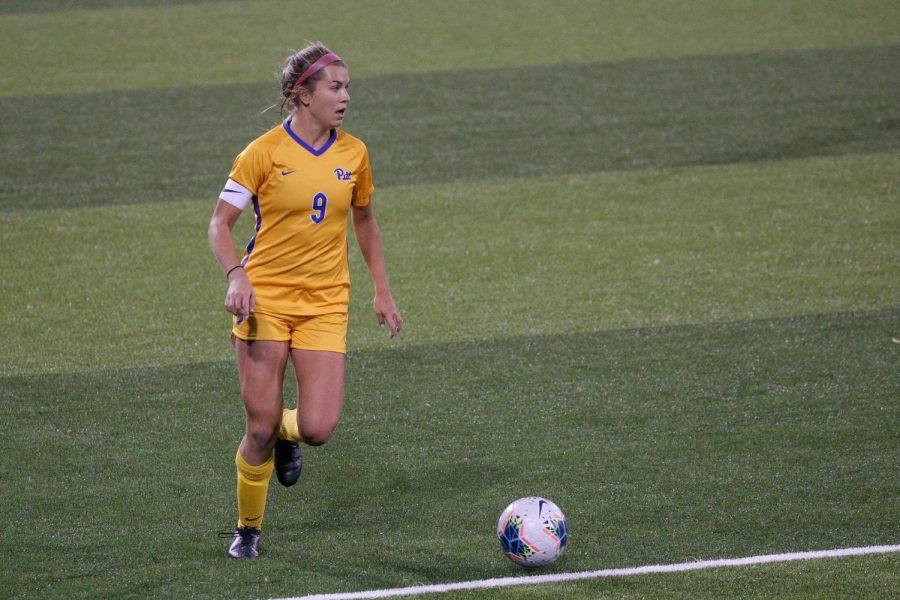 Pitt star forward Amanda West was named ACC Women’s Soccer Player of the Week on Tuesday for her performance in the Panthers’ final game of the regular season against Kentucky.

The notorious Punxsutawney Phil didn’t see his shadow on Feb. 2, promising six more weeks of winter before one of the most “beautiful and brightest springs you’ve ever seen.”

He seems to have blessed Pitt Athletics with his prediction, as Panthers teams have racked up a slew of accolades over the last week.

The Atlantic Coast Conference announced its awards for the 2020 volleyball season on Monday, with three Panthers receiving recognitions. Senior captains Kayla Lund and Chinaza Ndee made first team, and junior middle blocker Sabrina Starks landed on the second team. It marked the third consecutive first team appearance for Lund, second for Ndee and first for Starks.

Most notably, Lund received the ACC Player of the Year honor for the second year in a row, becoming the first player in conference history to win the award twice. She leads the Panthers in points per set, kills per set, digs per set and service aces per set.

The Pitt volleyball team recently concluded a perfect 12-0 record in the spring section of the regular season, and will play Long Island University in the NCAA tournament first round on Wednesday at 10:30 p.m.

Pitt star forward Amanda West was named ACC Women’s Soccer Player of the Week on Tuesday for her performance in the Panthers’ final game of the regular season against Kentucky. The sophomore sensation, known for her goal-scoring abilities, showed off her playmaking against the Wildcats with three assists, tied for second most in program history.

This marks the second time of the season that West has received this recognition, winning it once during the fall. With sophomore forward Landy Mertz’s selection on March 6, Pitt joins Clemson as the only two teams that have had players receive the recognition three times this year.

The ACC selected Pitt head coach Keith Gavin and NC State’s Pat Polozio as Co-Wrestling Coaches of the Year last week. Gavin becomes the fourth Pitt Athletics head coach to win a conference coach of the year award since Pitt joined the ACC in 2013, and the first since 2018.

Gavin led the Panthers to their most successful season in years, with two wrestlers getting to the NCAA Championship finals for the first time since 1963. The man knows a thing or two about postseason success as the last Pitt wrestling national champion, an achievement he accomplished during his college career, when he completed a perfect 33-0 season in 2008.

Men’s soccer back on top

Pitt men’s soccer received the No. 1 national ranking for the first time in program history in the fall, but fell after a loss to Clemson in the ACC Championship. But the Panthers have climbed back to the summit, reclaiming the top spot in this week’s United Soccer Coaches poll.

Pitt sat at No. 3 last week, behind Georgetown and Clemson. Neither team lost since then, but the Tigers tied against No. 4 Wake Forest. The Panthers, meanwhile, took down Notre Dame for the third time this season on Saturday, switching places with Clemson as the Hoyas remained at No. 2.