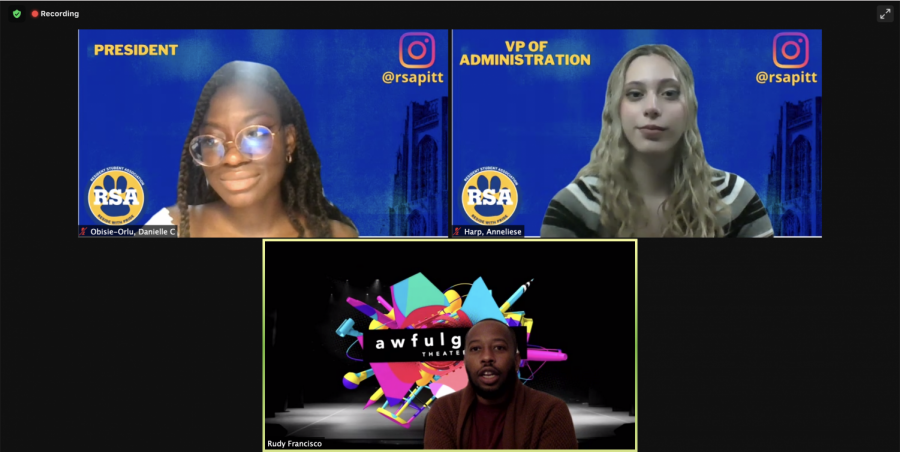 Poet Rudy Francisco gave performances of slam poetry in between taking questions Thursday night, in a town hall hosted by the Resident Student Association. In addition to reciting his poetry, Francisco talked about his becoming a poet, activism and his experience as a Black man.

Rudy Francisco, a San Diego-based spoken word poet, hasn’t always been keen on performing his work publicly. The first time someone read one of his poems aloud, it was his friend Samantha because he didn’t feel like the poem was good enough.

“My senior year in my English class we were given an assignment,” Francisco said. “Write a poem, bring it back, get full credit. So I wrote this poem about a girl I had a crush on. Samantha read the poem for the class, and the class claps, which is crazy because our class hated everything.”

Francisco performed slam poetry in between taking questions Thursday night at a town hall hosted by Pitt’s Resident Student Association. Besides reciting his poetry, Francisco talked about his becoming a poet, activism and his experience as a Black man.

Francisco has published five books of poetry revolving around the politics of race, class, gender and religion and won several slam poetry competitions, including the Individual World Poetry Slam in 2010 and the National Poetry Slam as part of the San Diego Poetry Slam team in 2017.

It wasn’t until after the incident with Samantha in high school that Francisco got into performing poetry live. He said after watching live recitations on HBO’s “Def Poetry” in college at Alliant International University, he felt inspired.

“I was mesmerized. I was like, ‘This is something I want to do,’ so I started writing,” Francisco said. “I started going out to the open mic scene and hosting open mics at my university.”

Francisco worked his way up, performing and winning at poetry slam competitions.

“Videos started going viral, I started getting bookings, and I was still in my Ph.D. program,” Francisco said. “I chose to leave my program and focus on poetry full time.”

Francisco recited the first poem he ever wrote, based on Steve Colman’s “I Wanna Hear A Poem,” at the request of Danielle Obisie-Orlu, the RSA president, who was one of two organization members who moderated the event. Obisie-Orlu said RSA wanted to do a poetry reading to emphasize elements of justice and equity in RSA’s programming.

“Poetry is such a great tool for advocacy because while it seems like a presentation, where one person is just speaking, to me, it’s a dialogue,” Obisie-Orlu said. “After all, while there might not be a verbal response, the words spoken are enough to move you and inspire you to act as a leader in our respective communities.”

After Francisco recited his first poem of the night, a metapoem on the types of poems he wants to write — one choice line being “I want to write love poems so sweet that the ink on the paper attracts honeybees” — Obisie-Orlu asked Francisco about the role of activism in poetry.

“I feel like the role of the artist is as the pulse of the society,” Francisco said. “A lot of times you can see what society was feeling by what art was created around that time. An important part of any movement is the art that’s created around it.”

Anneliese Harp, vice president of administration of RSA, said the event was planned to address broader issues, such as social movements.

“After the events of the summer, I realized there were not a lot of important conversations happening at Pitt in our broader community,” Harp said. “As the vice president of administration, I decided to make these town halls more meaningful so we could cover important conversations and bring light to problems in our society that our students face.”

At Harp’s request, Francisco discussed and recited a poem called “Adrenaline Rush,” a gut-wrenching account of living as a Black man in the United States.

“I wrote [‘Adrenaline Rush’] about five years ago, and it’s one of those poems I wish I could retire because it’s no longer relevant, but unfortunately it becomes increasingly more relevant as the years go on,” Francisco said. “I wrote it around the time of the Black Lives Matter movement.”

Francisco described the online backlash he got when he started to talk about his experience as a Black man, mostly in the form of Instagram comments. Francisco said he decided to continue writing about his experiences after discussions with a friend because he couldn’t let himself be viewed as colorless in his poetry.

“I came to the realization that a lot of people can enjoy my work and ignore my Blackness at the same time, and I decided to write [‘Adrenaline Rush’] because I moved into a new neighborhood and started getting harassed by police,” Francisco said. “The fear around that was something that was really in the front of my mind, and I had to write about it.”

Besides the messages of his powerful poems, Francisco had a message for students to take away from the event — to realize that they can have an impact on daunting problems through everyday action.

“I know a lot of issues seem very large, and very abstract. I think when we look at the big picture it seems very daunting, but think about ways in which you can break it down to an everyday thing,” Francisco said. “What’s something that I can do today that will get me closer to rectifying the issues we have in our country? Recognize how impactful you can be.”