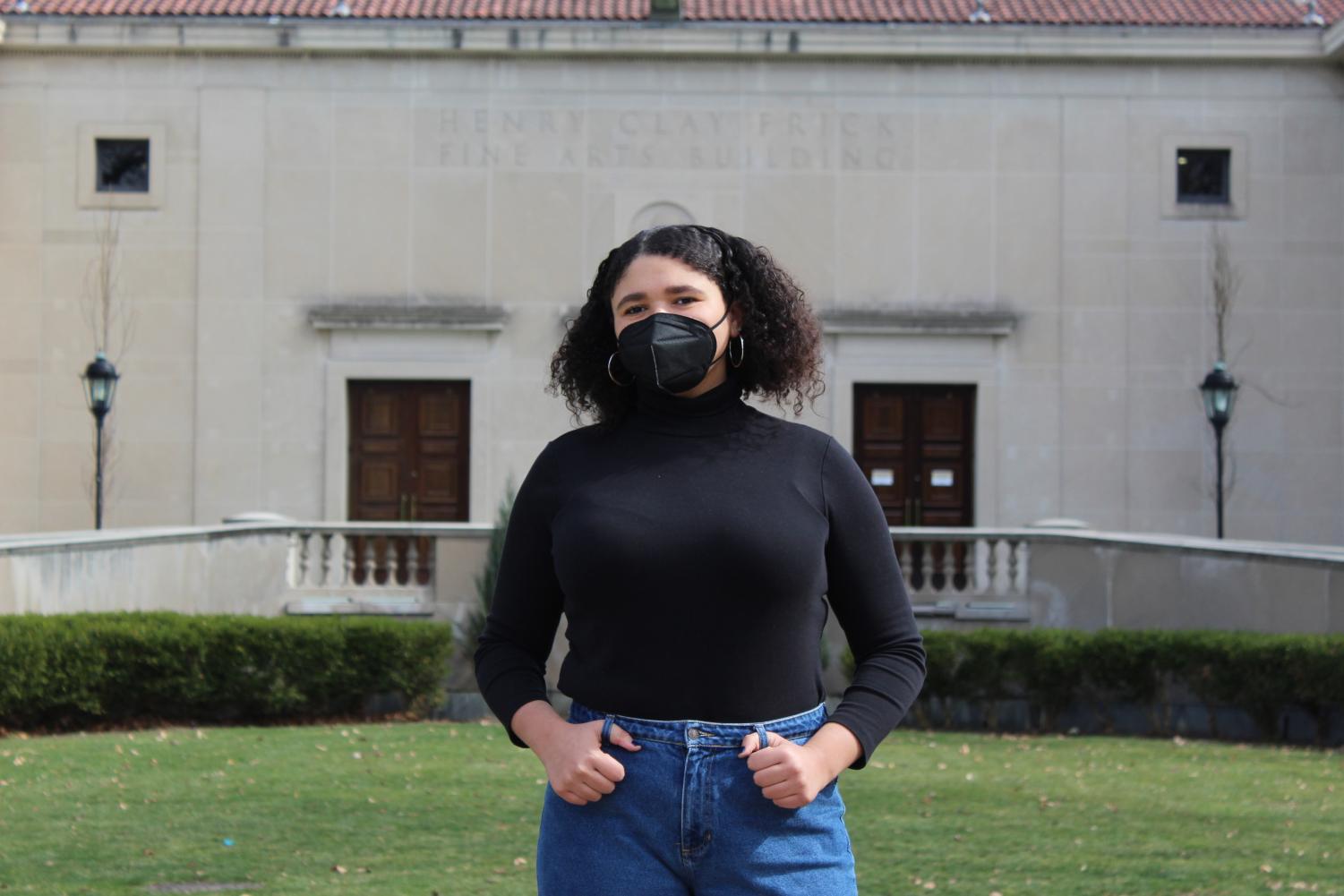 Anyone with a period knows how terrifying being stranded in public without menstrual products can be. That’s why Savannah Henry, president of Pitt Planned Parenthood Generation Action, worked to change that.

As president of Pitt PPGen, Henry organized the distribution of free tampons and pads in on-campus buildings. According to Henry, the club worked with Pitt administrators to distribute these products across campus.

“We've met with administrators and with the housing staff, and we were able to get them in most public buildings on campus,” Henry said. “If you’re ever in the library or in Posvar and you see free pads and tampons, know that Planned Parenthood helps get those in there.”

Henry’s impact hasn’t gone unnoticed, especially from her peers who have benefitted from her work with Pitt PPGen.

“I mentioned the work that we did in one of my classes and then someone came up to me and said that they used it because they didn't have a tampon,” Henry said. “And I think it’s awesome that we helped put them in there.”

Henry, a junior English and gender, sexuality and women’s studies double major, has been committed to women’s health advocacy since high school, after volunteering with her local Planned Parenthood in Erie.

“In high school, I volunteered with them for around two years,” Henry said. “I spent a lot of my time in the office organizing work and creating flyers for events.”

At Pitt, Henry joined Pitt PPGen during the second semester of her first year. According to Henry, her work with the club first involved a campaign against crisis pregnancy centers.

“The first thing I kind of got involved with that PPGen was dealing with was crisis pregnancy centers, which are essentially fake abortion clinics,” Henry said. “There's one in Oakland, so a member of the club went and got treated very poorly, so we ran a campaign against them.”

At the end of her first year, Henry applied to be a court member — what other clubs call an executive board member — of PPGen. Henry said she was initially interested in joining the court because of how inclusive and welcoming it was.

“It was just such a nice, loving environment, and it was very inclusive and I think that's super important,” Henry said. “I really liked the way everything operated and I knew I would like to be involved with it.”

Out of all the club meetings she went to as a first-year, Henry said she felt Pitt PPGen was the only truly inclusive club in which she felt comfortable.

“When I first came to Pitt, I went to so many club meetings,” Henry said. “A lot of them were rooted in activism, but I felt that even in an environment where it's supposed to be so inclusive, it was still very exclusive. You had to be super smart and woke, and you couldn’t ever laugh.”

According to Henry, being nominated president as a first-year came as a complete surprise, and she said she remembers exactly where she was when she got the call.

“I applied and I was chosen to be president,” Henry said. “It’s funny because I remember getting the call that I got president when I was living in Towers, so I was like, very young when it happened.”

As president, Henry’s first accomplishment was getting the club a table at Pitt’s Healthy U fair, an annual event that includes games, raffles and other events that intend to promote personal health and wellness.

“That was brilliant because we were able to table and get our services out there,” Henry said. “We did a bake sale and if you bought brownies and stuff, we also were able to give out condoms and other things along those lines.”

Henry also focused on sustainable initiatives for the club. According to Henry, PPGen applied to the Green Fund through Pitt’s Student Office of Sustainability in order to purchase and distribute reusable menstrual products.

While Henry has focused on outreach events, she has also been concentrating on improving some of Pitt’s services as well. According to Henry, Pitt PPGen has worked with Pitt’s Title IX office in order to decrease overall police involvement in Title IX cases and make the office more accessible for students.

“Right now on Title IX, if you report something, the police are often involved,” Henry said. “We're trying to get away from the police and basically demilitarize Title IX, because we don't think that the police should be like the first option if something happens to you.”

Henry said the club is focused on decreasing police involvement because she believes the police aren’t always beneficial to women.

“A lot of people are very pro-police because they think they are the only group that can help protect women, but often the police aren't always actually protecting women,” Henry said. “So we're trying to push for the demilitarization of Title IX.”

According to Henry, the club also worked with graduate students and wrote an open letter to the Title IX office after it sent out a controversial flyer. Henry said this flyer was intended to spread awareness about sexual harassment, but felt it was insensitive and poorly worded.

“We took the flyer that Pitt sent out and we corrected it and included a list of demands,” Henry said. “That got the attention of the Title IX office, so we met with one of the office’s employees, Katie Pope.”

Even though the COVID-19 pandemic has slowed down the reform process, a member from PPGen — currently, Title IX liaison Jordan McCann — still meets with the office once a month, according to Henry.

“We actually made a position called Title IX liaison,” Henry said. “One of the members of our club or one of the people on our board meets with the people from Title IX once a month, just so that our voice and our demands are still in their ear.”

Although Henry is the club’s president, she emphasized the fact that any member of the club can bring ideas to the table.

One of Henry’s most important goals is improving intersectionality awareness within the club.

“Planned Parenthood is a super white organization,” Henry said. “The main people who are the supporters are wealthy white women, but the main people who use their resources are impoverished people of color, and a lot of times, there's a big disconnect there.”

According to Anushay Chaudhry, the vice president of Pitt PPGen, Henry has had a monumental impact on the club because of her hard work.

“She's honestly one of the most incredible student leaders that I've met on campus because she's so hardworking,” Chaudhry, a junior double majoring in psychology and politics and philosophy, said. “She and the rest of the board were able to extend our membership from four people our freshman year to about 500 members on our email list sophomore year.”

Chaudhry also said she believes the club wouldn’t be what it is today without Henry’s work.

“It’s a testament to just how charismatic and hardworking she is,” Chaudhry said. “I think this club would not be what it is right now without her and her amazing initiatives that she's been able to implement.”

According to Sarah Panzer, a close friend of Henry and former roommate, Henry’s motivation and drive has impressed her since they moved in together during their first year at Pitt.

“I think that Savannah is just a really special person,” Panzer, a junior sociology and religious studies double major, said. “As a freshman, I was always so impressed with how motivated she was to get involved with things on campus, while I hadn't even been able to adjust to anything yet.”

According to Panzer, Henry has always been a selfless advocate for others.

“I think that she's just constantly thinking about how she can make wherever she is a better place for everyone,” Panzer said. “In everything she does, I feel like there's always these desires to do things not for herself, but for others, and I think that that's really special.”

Henry said it’s good to know that the work she’s done has benefited students on campus and that it will leave a legacy for future Pitt students.

“It’s nice to know that the things I did and dedicated my time to made an impact, even in a small way,” Henry said. “And even when I leave, there's still going to be accessible menstrual products for people on campus.”

Chaudhry is a former staff writer at The Pitt News.

This article has been updated to better reflect the involvement of police in Title IX reports.