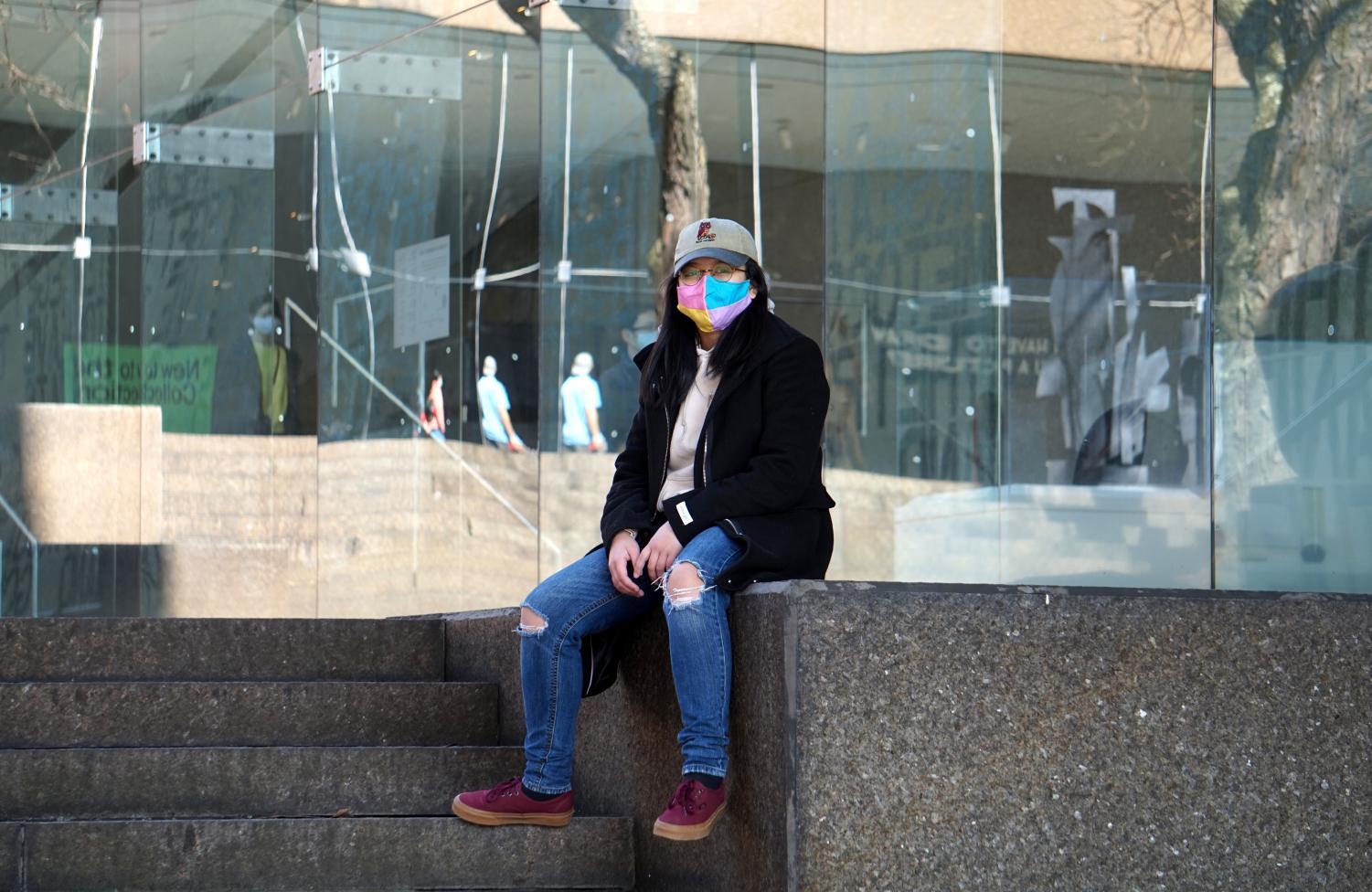 Beatrice Fadrigon is walking away from Pitt having carved out a space for queer Asian students — a space that didn’t exist before, and she said is necessary now more than ever.

She attributes the success of AQUARIUS — the Alliance of Queer Underrepresented Asians in Recognition of Intersectionality to Uphold Solidarity, a club she co-founded — to the people she has worked with during her time at Pitt. Fadrigon said she has seen people go from shy students to proud and outspoken activists.

“Even just from last semester, from a couple of freshmen who joined to the work that they do now … I feel like a mom to them because I'm just so proud and I love them so much,” Fadrigon said. “For Valentine's Day I sent them a message and I was like, I love and appreciate the work you do.”

Fadrigon is graduating from Pitt this spring with a psychology major and a minor in film and media studies, and has chaired Student Government Board’s diversity and inclusion committee this year. Her friends describe her using words like “empowered,” “selfless,” “passionate” and “caring.”

“The only way I can motivate myself to do anything is that if it helps others,” Fadrigon said. “And I don't know, that seems like so high up there — praiseworthy or whatever but it's just like, I don't know what I'm doing if it's not for other people.”

She attributes her drive to her siblings. Being the oldest of three, Fadrigon said almost everything she did as a child and everything she does now is for them. Her family moved to the United States from the Philippines when Fadrigon was 7 years old. She didn’t think of it as a culture shock right away, since she was still young.

“I remember a month and a day after I moved to the U.S., High School Musical came out,” Fadrigon said. “The first one, I became obsessed with it when I was a child.”

Fadrigon said a part of her has known she was queer all along but reflecting back, it was much easier to recognize when she found queer friends, especially queer Asian friends whose experiences she could relate to.

But she realized it when she was watching “Glee” with her mom.

“We watched it because there was a guest star on season two that was Filipino, and my mom was like we have to watch this, we have to support her!” Fadrigon said. “And then suddenly gay people existed in my head, and I was like, is this what I have been feeling?”

She moved around a lot in elementary and middle school. In middle school, she lived in Hershey, and started to realize that her immigrant family didn’t really fit into the wealthier, upper-middle-class atmosphere. That realization was solidified when she attended high school in York County, which is majority white. She said out of about a thousand students at her high school, there were maybe five students of color. She was bullied a lot for being different, by students and even teachers.

“We were practicing CPR in health class, and my health teacher said ‘girls, when we practice CPR next week don't wear skirts because you have to get on your knees and push on the model, and the boys and Beatrice might look up them.’” Fadrigon said. “I definitely should have reported him then but I just kind of internalized it.”

Fadrigon said she has always been relatively comfortable with her sexuality, her ethnicity and who she is as a person.

One of her friends, Jenny Zhen, noticed Fadrigon’s openness on first introduction.

“She is passionate about what she does, in terms of learning about different communities [and] how she can support them,” Zhen said.

Fadrigon said openness has always been part of her character.

“I was very outspoken, and I didn't know that that was just a part of my character,” Fadrigon said. “I got all these letters from my favorite teachers when I graduated high school, and they said ‘just continue to be brave and continue using your voice. Like just lead with your morals and whatever else will follow will be good.’ And I'm like, okay, cool, I guess, I don't know, I'm just kind of standing up for myself because I'm pissed off with everyone.”

Being queer in a Catholic Asian household presented its own unique challenges for Fadrigon. Her parents found out about her sexuality twice, not by her choice — once going through her iPod, and then another time going through a small diary she had. Being raised in an Asian Catholic household, Fadrigon said it was difficult for her family to accept her for who she is, and they often told her that it was a phase. Her grandmother even told her that her sexuality was because she had a demon inside of her.

“I feel like the gay rights movement has definitely exponentially grown, which is great for kids now,” Fadrigon said. “When I was in middle school, it was still cringey. It was like going to Five Below to buy a rainbow magnet cringey.”

Fadrigon often feels that her academic and leadership achievements outweigh the negative aspects of her identity in her parents' eyes. Combined with her family’s status as low-income immigrants, Fadrigon said her family was worried that her sexuality would be an added struggle for her. But Fadrigon shows them that being queer is a strength, not a weakness.

“I kind of stepped up and I was like, hey, I can still be successful and be confident and comfortable with my identity,” Fadrigon said. “That kind of changed their mind. The third and final time that I came out to my parents and they were okay with it was when I was hospitalized during my sophomore year for a brain bleed. I was in the hospital bed and I was like, ‘Mom can my girlfriend come over.’ And she was like, ‘Oh, you have one, that's okay.’ And I think being in that hospital bed made her realize what it was. I kind of used that moment to be like hey, I have a partner. This is her, we are dating, we have been dating.”

The struggles Fadrigon had with her family and Filipino culture accepting her are not isolated incidents — she said AQUARIUS was created because of those issues that are shared in much of the Asian queer community. For her specifically, the stigma of being gay and Filipino was something she has thought a lot about.

“We have this proximity to whiteness that is so palpable,” Fadrigon said. “We just love America for some reason. We consume American media and Americans [have] kind of been in the Philippines for as long as it's been a country. I feel like there it's starting to become more acceptable to be comfortable in your sexuality just because of that.”

Fadrigon also noted the differences in Filipino culture before and after colonization by America, and how those effects are still felt deeply today as Americans become more liberal with gender roles, when they were the ones who imposed strict gender roles on the Philippines in the first place.

“America is leading the way back, which is frustrating since we were a matriarchy and had no gender roles before we were colonized,” Fadrigon said. “How much can Asian Americans really empower and help their home country without having an almost gentrification aspect to it, where it's like you're bringing in all these Western ideas without considering their home ideals?”

Fadrigon’s time at Pitt allowed her to grow as a leader and use her voice in a way that she had never thought about using it before.

AQUARIUS started in 2018 on Facebook. Co-founder Carolyn Chen was a senior at the time when she posted a request asking for help in starting a new space for LGBTQ+ Asian Americans. Fadrigon originally wasn’t planning on contributing, until two of her close friends motivated her to help. Fadrigon became the co-founder of AQUARIUS her sophomore year.

Uma Balaji, a close friend of Fadrigon, said she’s constantly in awe of her.

“It’s been really cool to see her grow into her power,” Balaji said.

Something Fadrigon tried to convey through AQUARIUS’ mission statement is that Asia is not a monolith.

“No culture is going to be the same,” Fadrigon said. “But something that is kind of applicable to most of Asia, at least Southeast and South Asia, is colonizers that standardize and normalize heterosexuality rather than any queerness at all, because I think that helps our community kind of realize that like we are not like America and the West is not saving us from these homophobic countries.”

“I think that for Asian Americans, it's hard to feel connected to your home country if you weren’t born there and your parents don't actively do anything to connect you with it. Maybe your cultural governance organizations just aren't the best at doing that either. It's kind of tough to stay connected. And on top of a queer identity too.”

Fadrigon said that in her first year, she felt like a background character both at Pitt and in the cultural organizations, such as the Asian Student Alliance, that were meant to represent her, and that was one of the main reasons that AQUARIUS was created — to make sure people know they belong.

Fadrigon feels that sometimes student leaders and clubs aren't inclusive enough and can leave out lots of people, such as adoptees, people of different religions and those who are not heterosexual, intentionally or not. AQUARIUS is her remedy to this, and it's soothing the ache of unbelonging.

“I feel like AQUARIUS has definitely been that place for specifically any queer Asian Americans who feel like a background character to come forward and speak up,” Fadrigon said.