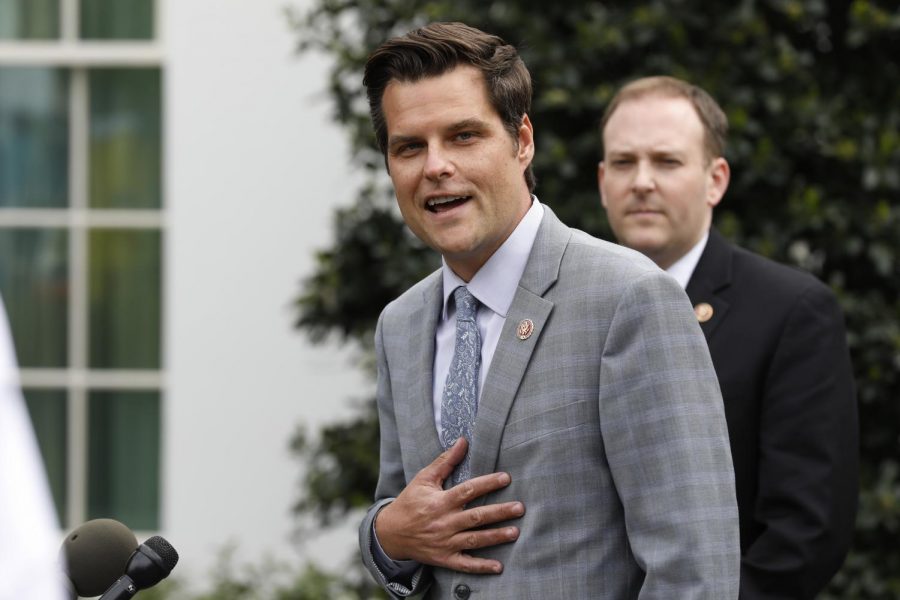 Congressperson Matt Gaetz, R-Fla., speaks with reporters after a meeting with then-President Donald Trump at the White House on April 21, 2020.

Rep. Matt Gaetz, R-Fla., has recently become the subject of a United States Department of Justice investigation resulting from allegations that he was involved in sex trafficking and had sex with an underage girl.

As despicable as Gaetz’s alleged actions are, few of his fellow Republicans have spoken out to condemn him or otherwise voice disapproval for what he has been accused of. Two congresspeople — Rep. Jim Jordan, R-Ohio, and Rep. Marjorie Taylor Greene, R-Ga. — actually came to Gaetz’s defense, with Jordan saying that he believes Gaetz, and Greene calling the investigation “another witch hunt.” While this isn’t necessarily surprising, it is not acceptable by any means — Republicans must speak out against Gaetz and condemn him.

Gaetz was first accused of breaking sex trafficking laws and having sex with a 17-year-old when his ties to Joel Greenberg, a former local official in Florida, were discovered. Greenberg was indicted in summer 2020 on charges of sex trafficking and financially supporting people in exchange for sex — including an underage girl. Greenberg is set to stand trial this June.

Shortly after Gaetz’s involvement came to light, the U.S. Department of Justice began to investigate the depth of his involvement and whether or not the accusations against him are true.

When allegations came out against Gov. Andrew Cuomo, D-N.Y., several weeks ago, many Republicans were quick to rebuke him and call for his resignation. They were absolutely right to condemn Cuomo — sexual misconduct should never be excused — but they must denounce the misconduct of members of their own party, not just the opposition. Notably, Rep. Elise Stefanik, R-N.Y., strongly rebuked Cuomo in a statement posted to her Twitter.

“Sexual harassment and sexual abuse in the workplace is not a political issue, it is about right and wrong,” Stefanik wrote. “Governor Cuomo must immediately resign. And any elected official who does not immediately call for his resignation is complicit in allowing a sexual predator to continue leading the great state of New York.”

Ironically, Stefanik has not called for Gaetz’s resignation following the allegations against him. In fact, it appears she hasn’t even released a statement about his alleged misconduct. In fact, most of the Republican party has not condemned Gaetz’s alleged actions as seriously or as passionately as members denounced Cuomo. This is unacceptable. Any allegation against a politician should be taken seriously and investigated thoroughly, regardless of what party they come from. House minority leader Kevin McCarthy, R-Calif., made a statement about Gaetz and the investigation on Fox News.

“Those are serious implications. If it comes out to be true, yes, we would remove him,” the House Republican leader told Fox News this week. “But right now, Matt Gaetz says that it’s not true, and we don’t have any information. So let’s get all the information.”

McCarthy’s statement is entirely inadequate. Gaetz’s denial of the accusation cannot be trusted, just as Cuomo’s denial could not be trusted. There is significant enough evidence that Gaetz was involved in something illegal, or at least suspicious, that this cannot be brushed aside, and Republicans need to realize this.

Republicans need to condemn Gaetz and his alleged actions, just as Democrats condemned Cuomo when survivors brought forward the allegations against him. To do otherwise is extremely hypocritical. We know that this isn’t a revolutionary way to describe the Republican party, but unless members change the way they respond to allegations such as those against Gaetz, we will have to keep saying it.