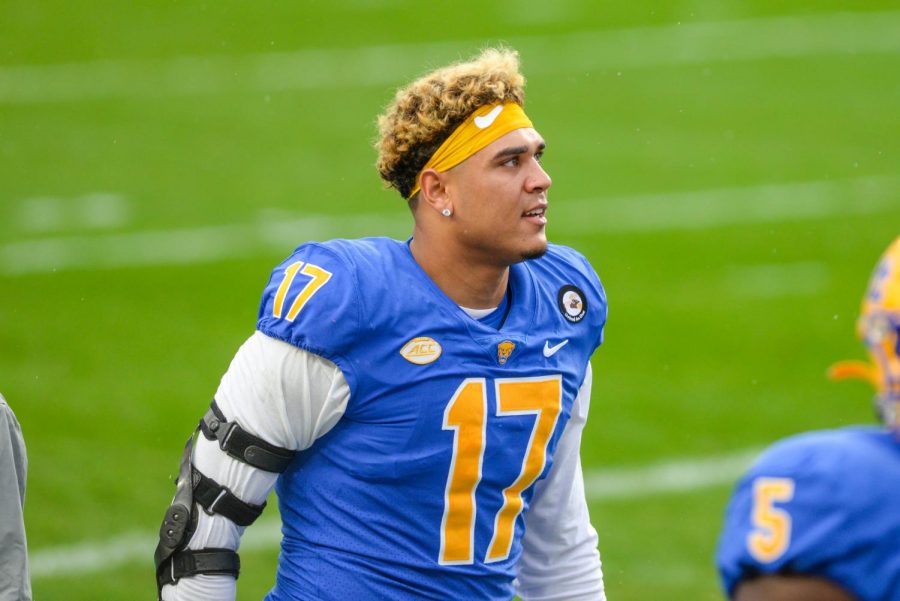 Edge rusher Rashad Weaver registered 35 tackles, 14.5 of which were for a loss of yardage, on top of 7.5 sacks and three forced fumbles in 2020.

The Pitt football program has produced some of the NFL’s biggest names for decades. Darrelle Revis, Aaron Donald and Larry Fitzgerald all donned the Pitt script, among others, before having Hall-of-Fame-caliber careers in the NFL. With the NFL draft rapidly approaching, Pitt has one of its most exciting draft classes of the last few years with numerous Panthers sporting a chance at hearing their name called by NFL Commissioner Roger Goodell. Here’s where the former Panthers can expect to get drafted.

Weaver missed the entirety of the 2019 season with a torn ACL before getting a chance to step foot on the gridiron. His hopes at a first-round pick seemed to have slipped away, but he salvaged whatever chance he had left at a day-one selection with a stellar 2020 season. Weaver registered 35 tackles, 14.5 of which were for a loss of yardage, on top of 7.5 sacks and three forced fumbles in 2020 — proving he could do it all while earning first-team All-ACC and All-American honors.

Scouts will notice Weaver’s size immediately, standing at 6-foot-4 with an 83-inch wingspan as an edge rusher makes him a defensive coordinator’s dream. Despite his impeccable size and impressive final season at Pitt, some questions surround his speed after his first step. Weaver has tended to get caught standing upright, leading to him getting blocked off of his initial angle — but his impressive 6.98-second three-cone drill could change some scouts’ minds about the defensive end’s athleticism.

Robert Saleh, the defensive-minded first-year head coach for the New York Jets, will certainly have his eye on Weaver on day two. Pairing him alongside budding interior lineman Quinnen Williams and free-agent signing Carl Lawson will set the Jets up to have a D-line to build around for years to come.

While Weaver certainly has room for improvement, his exceptional size and lofty ceiling, going alongside an impressive 2020, should be enough for him to hear his name called by the end of day two.

Before opting out of the 2020 season, NFL scouts widely considered Twyman a top-tier prospect with first-round potential. He became a game wrecker for opposing coaches by stuffing the run and getting to the opposing QB in a hurry. His team-leading 12 tackles for loss and 10.5 sacks in his sophomore season garnered second-team All-American honors on top of being named first-team All-ACC. Twyman’s smaller stature and success led to many drawing comparisons to former Pitt star Aaron Donald — a three-time NFL Defensive Player of the Year.

The buzz around Twyman seemed to die down after he sat out and other players improved their draft stock in the shortened season, but after an eye-popping pro day, he seems to have regained some momentum heading into the draft.

Twyman will thrive in a 4-3 defense, the same that the Panthers employ. Having a strong defensive tackle who can play both the run and the pass is crucial for the success of a 4-3 defensive scheme, and Twyman can do that. The Cowboys, who also utilize a 4-3 design, struggled mightily on defense in both the pass-rush and defending the run — Twyman would fill this gap in the defense immediately.

There are some worries that Twyman may be slightly undersized and struggle to translate his game at the professional level — some of the same doubts scouts had about Donald. However, the fact that the Cowboys desperately need an interior lineman makes selecting the wildly talented Twyman a no-brainer for owner Jerry Jones and the Cowboys in round three.

Coming off of a stellar end to his collegiate career, Jones has set himself up well to get drafted in the first half of the event.

Jones boasts impressive size, standing at 6-foot-5 paired with an 80-inch wingspan to provide him with solid reach. On top of his size, Jones has the athleticism for an advantage with a quick and powerful first step as well as the ability to effectively contain even the most elusive running backs in all of college football. Like Weaver, the combination of size and athletic ability will draw the attention of defensive scouts as a player who can be molded into a perennial star.

The Bills possess few holes, owning an explosive offense led by budding-star QB Josh Allen and a very solid defense led by young linebacker Tremaine Edmunds. However, the current edge rushers for the Bills have aged and don’t influence plays enough — some fresh blood could do the team some good. Operating in the Bills’ 4-3 defense in the pros will once again translate well for a Pitt defensive lineman, and the Bills should be excited about the athlete they’ll select in round three, becoming the third Panther to come off the board in the round alone.

Damar Hamlin (defensive back) — Round 6: No. 199 overall pick (Minnesota Vikings)

Hamlin is a witty, well-sized defensive back who has shown excellent skills against the pass and run in his career at Pitt — making him the top candidate for the first non-defensive lineman to get drafted from Pitt.

The Pitt safety registered 67 tackles on top of seven pass breakups and added two interceptions to a solid final season. Hamlin’s great instincts and discipline on the field stand out to scouts, allowing him to excel in both the run and the pass.

There are some concerns surrounding Hamlin’s athleticism. He lacks that “long-lasting” explosiveness necessary to cover the deep third for NFL safeties, which could lead to problems if teams ask Hamlin to play man coverage.

However, his ability to read the ball in the air and stuff the run could set him up well to provide depth at the safety position for a team that operates primarily in a zone cover 3 defense. The Vikings could present a perfect fit late in the draft, as Hamlin can learn behind veterans Patrick Peterson, Xavier Woods and Harrison Smith.

A Vikings-and-Hamlin union would make a whole lot of sense for both parties.

Morrissey stole the hearts of Panther fans as he rose from a walk-on as a first-year to a reliable starter, earning a scholarship before the end of his career. Morrissey will undoubtedly get a chance to make a team in the NFL, just as he did at Pitt.

Panther supporters will appreciate one realistic potential landing spot for the fan-favorite center — the Pittsburgh Steelers. Morrissey has a chance to step up as the new center for the Steelers in the wake of perennial All-Pro center Maurkice Pouncey’s retirement. Morrissey will fit in well with the Steelers culture as a hard-nosed and gritty player.

At one point, scouts considered Ford a top-tier safety prospect as he led the Panthers in tackles and interceptions while earning first-team All-ACC honors. But after an underwhelming 2020 season, one he opted out of midway through, and a pro day that hurt him more than helped him, Ford may not hear any teams call his name.

But the film speaks for itself — Ford has good instincts and hits as hard as anyone. There’s no clear-cut favorite to sign Ford, but safety-desperate teams such as the Los Angeles Chargers, Jacksonville Jaguars and Baltimore Ravens could become potential suitors for the former Pitt safety.

The NFL draft kicks off in Cleveland on Thursday, Apr. 29, and wraps up on Saturday, May 1.