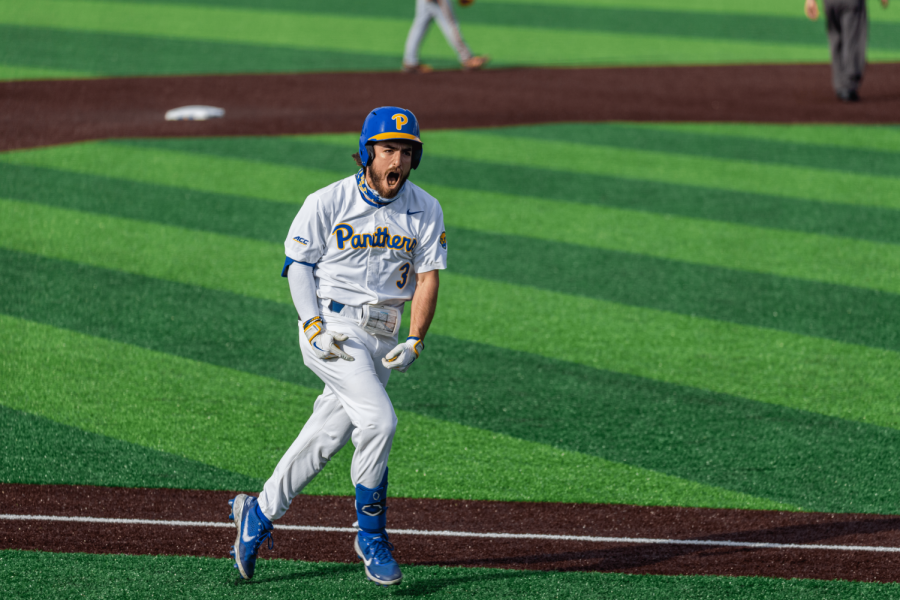 Pitt baseball sweeped No. 20 Miami for its first home ACC series win of the season this weekend. After eight pitches, including four straight foul balls, sophomore infielder Sky Duff unloaded a grand slam to right-center field during the first game.

Pitt baseball bounced back from the Notre Dame series with a sweep of No. 20 Miami at home this weekend. The No. 17 Panthers came in having lost their first two ACC showdowns at home — Virginia Tech swept them and Notre Dame took two of three. But Pitt head coach Mike Bell knew that his squad had the ability to win a home series.

“We’ve done some pretty good things, man,” he said. “We’re proud of the fight we’ve shown throughout the series. We knew it wasn’t going to be easy, but our guys battled our butts off.”

Pitt got on the board early in the first game and led 3-2 after five innings, but it surrendered that lead in the sixth inning when Miami junior infielder Raymond Gil hit a three-run home run over the fence in left field. The Hurricanes took a 5-3 lead heading into the bottom of the sixth.

The Panthers didn’t take long to get back at the ’Canes, however. With the bases loaded, junior outfielder Jordan Anderson cut the deficit with an infield single. The bases remained loaded when sophomore infielder Sky Duff came to the plate. After eight pitches, including four straight foul balls, Duff unloaded a grand slam to right-center field.

Duff’s nine-pitch at-bat had players and coaches uttering a relatively new phrase that has picked up steam in the last week — “Gritsburgh.” Bell explained what that meant to the team.

“It just shows the toughness in our guys,” he said. “It embodies the team. Some of our at-bats aren’t sexy, but we fight foul and grind, then we hit a home run.”

The Panthers never looked back after the grand slam. In the seventh inning, senior catcher Ramon Padilla smacked his first home run since transferring to Pitt this season, extending the lead to 10-5. The Panthers would put up two more runs in the later innings, and Gil’s second home run of the game couldn’t help the ’Canes bounce back. Pitt won the first game 12-6.

The second game started with an early Miami run in the first inning, but Pitt bounced back with three runs in the bottom of the second. Junior infielder Bryce Hulett and Anderson both had RBI base hits in the frame.

The back-and-forth game then saw the ’Canes cut into the lead in the very next inning on a double from first-year infielder Yohandy Morales. A throwing error by Pitt senior infielder David Yanni allowed Morales to score the tying run. The damage could have been worse, but a lineout double play limited Miami to just two runs in the third. Pitt took the lead right back in the bottom half on an RBI hit from junior outfielder Ron Washington Jr.

The scoring ended in the sixth inning, but Miami came ever so close in the eighth and ninth innings. In the eighth, the ’Canes had the bases loaded with one out and the power-hitting Gil at the plate. The infielder grounded the ball to Yanni, who turned the 4-6-3 double play to end the inning.

The ’Canes would load the bases again in the ninth inning, this time with no outs. Redshirt junior pitcher Dylan Lester faced sophomore infielder Anthony Vilar, who flew out to left field, but not deep enough for the runner on third to tag up. The runner on second went too far off the bag, however — the throw from the outfield went to Duff, who turned around and gunned down the runner at second base. Two outs, no runs scored. Morales struck out looking to end the game, which Pitt won 6-4.

Washington applauded the defensive effort late in the game, but explained that all came as a part of a day’s work.

“We’re just doing what we’re doing,” he said. “It’s always next-man-up for us — one day the defense will pick us up, then the next day it’s the offense, then the pitching. That’s the nature of the game.”

The Panthers had clinched the series, but a third game still awaited and the ’Canes made it hard early. After Miami junior infielder Alex Toral knocked in a run with a base hit in the second inning, first-year infielder Dominic Pitelli crushed a home run to right field and gave Miami a 4-0 lead. The score stayed like that until the fourth, when the Panther bats started to wake up.

Hits from Hulett and Anderson set up Duff for a two-run base hit to right-center field. The third baseman picked up RBIs six and seven in the series, but said he just wanted to continue the inning and keep the lineup moving.

“It’s just me doing my job and getting the next guy to the plate,” Duff said. “Trusting myself that everything would fall into place.”

Popa came to the plate next and sent the 1-0 pitch over the fence in a similar spot to Pitelli’s dinger. In the span of three pitches, Pitt had tied the game at four runs apiece.

After an uneventful fifth inning, the bottom of the sixth started with a pop fly from sophomore infielder Brock Franks. It would take 10 more batters to finish the inning.

Padilla, Anderson and Duff all got hits to bring Popa up with the bases loaded. The senior drove a single through the left side and plated two more runs. A sac fly gave the Panthers another run. A couple batters later, Hulett squared and demolished the 1-1 pitch for Pitt’s second grand slam of the series. The Panthers sent 11 men to the plate in the sixth and scored seven runs on seven hits to make it 11-4.

Miami would score one more run on a sac fly in the top of the eighth, but Washington got that run back with a blast to left field in the bottom half. Pitt took the final game of the series 12-5.

Hulett’s eight RBIs helped Pitt power past the ’Canes, proving the importance of the bottom half of Pitt’s lineup.

“We just bring a lot of grittiness,” he said. “We pick each other up, that’s what we do here.”

The Panthers will host the Lipscomb Bisons for their next two-game series starting Tuesday April 13.