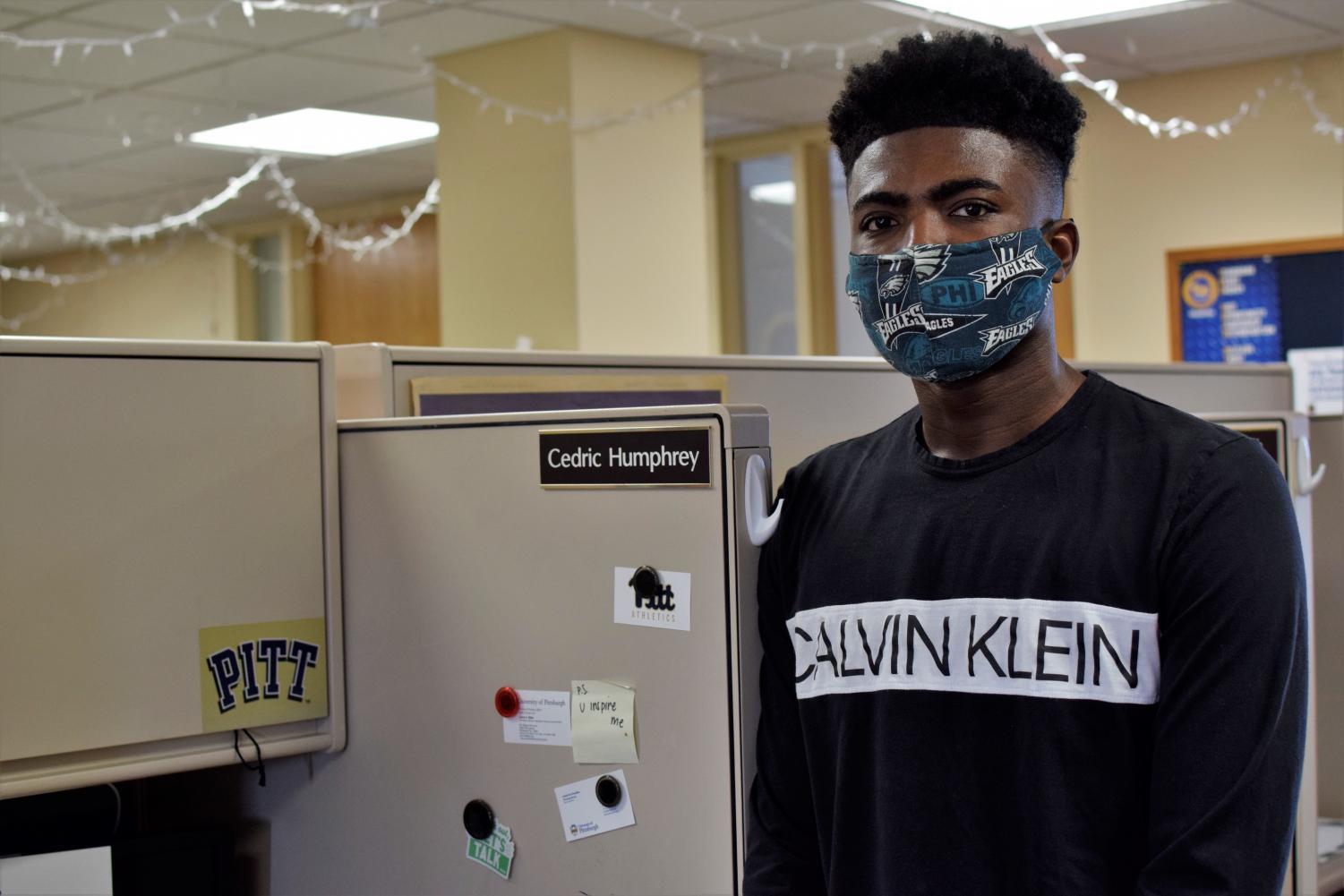 Cedric Humphrey: An era of empathy

Cedric Humphrey is so much more than the Pitt senior who stumped President Joe Biden.

Though Humphrey’s question to President Biden about Black voters at an October town hall catapulted him into national news — CNN, The New York Times and The New Yorker, to name a few — he’s made headlines at Pitt for years now.

As executive vice president of Student Government Board, Humphrey oversees a lot of moving parts and moving people.

“My job is to create different initiatives that would better the student body experience and pursue those over the course of the year,” Humphrey said.

A tall order for a year marked by political instability and a pandemic — but Humphrey hasn’t let anything slow his plans.

“This year, carrying on something that I brought from last year’s Board, we’ve been really focused on civic engagement,” he said.

Humphrey’s whole life has been marked by his dedication to civic engagement. In high school in his hometown of Harrisburg, he was the treasurer of five clubs. Before joining SGB in 2019, he worked for Pitt Serves at the community engagement centers in Homewood and the Hill District. Placed in the latter’s Center That Cares, Humphrey taught basic coding to grade schoolers.

“The community assistant program really showed me that the next year I wanted to continue my involvement in some way,” he said.

It took a copy of The Pitt News, grabbed from a Centre Avenue news box, to show Humphrey his next step. After reading an article about SGB’s search for more students interested in getting involved, Humphrey called his girlfriend and then filled out a packet to run for office.

“The rest is really history from there,” he said. 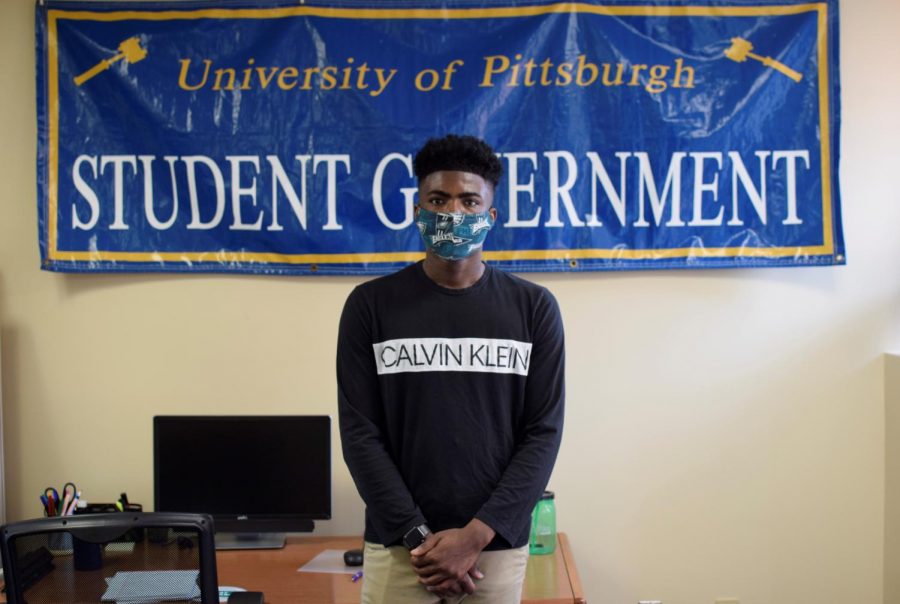 As a member of SGB, Humphrey’s dedicated time to many projects, from writing The Year of Engagement’s initial proposal to serving on both the University Senate’s  Athletics Committee and the Board of Trustees’ Athletics Committee, apt assignments for the vice president of Pitt Team Handball Club.

He also helped establish, in conjunction with the Black Senate’s list of demands to Pitt last June, a subcommittee on the Chancellor’s Public Safety Advisory Council. But beyond committees, one of SGB’s main functions is to pass legislation, something that Humphrey says starts in a very simple place.

“Most of the things we do come from talking with students, hearing about different issues, and then digging deeper into them and then trying to solve them,” he said.

The core drive for SGB’s members is simple — help students.

Humphrey spent much of his time working on an internship credit initiative, challenging a rule from Pitt stating that any student who completes an internship over the summer must do so for credit rather than money. Humphrey passed down his initiative to the Board’s Academic Affairs committee this year — its members have been meeting with Dietrich school administrators to discuss potential changes.

“I didn’t understand why that had to be the case,” Humphrey said. “If a company wants to pay you, they should be allowed to pay you. I didn’t experience that myself — I had friends that experienced it, and they told me about it … it’s things like that, where you’re just having this dialogue with students and recognizing problems.”

Not experiencing something himself but still seeking to change it speaks to one of Humphrey’s guiding philosophies.

“We need to have empathy for everybody,” he said.

Humphrey recalled a conversation with a friend during the 2016 presidential election where they both lamented the distinct lack of compassion in the world.

The push toward prioritizing kindness stems from Humphrey’s mother, who he said is the single greatest person he knows.

“If you go to Harrisburg and you walk down the street and you ask 10 people ‘You know Yolanda Goodwin-Humphrey?’ I’m pretty sure one out of those 10 people will tell you a story about how she’s been great in their lives,” Humphrey said.

Goodwin-Humphrey feels much the same way about her son.

“Cedric has taught me not to judge and to look for the good in everyone and accept people for who they are,” Goodwin-Humphrey said.

She remembers Humphrey’s capacity for kindness from a young age. He once took a stand against some bullies picking on a friend in only fourth grade.

Goodwin-Humphrey has no trouble picturing her son as a politician, even at an early age. Sometimes, Humphrey created that picture himself, like when he dressed up as President Barack Obama in grade school.

Humphrey catapulted from dressing up as the president in childhood to interning for Lieutenant Governor John Fetterman in summer 2019. During his internship, Humphrey handled constituent services like replying to mail, gave tours of the office and trained to process the Board of Pardons’ clemency applications. He also helped finalize a special report on marijuana submitted to Gov. Tom Wolf after a 67-county listening tour.

“I’m a big John Fetterman fan,” Humphrey said. “Working in his office for an entire summer was a really great experience. He is definitely a welcome voice for change that’s needed in the Commonwealth of Pennsylvania.”

Now, as graduation approaches, Humphrey’s resolved to take a gap year before returning to higher education. As he decides between law school and a master’s in Public Policy, he hopes to work on a Senate campaign — potentially for Fetterman, but as an impassioned follower of Pennsylvania politics, Humphrey’s keeping his options open. Malcolm Kenyatta, a state representative from Philadelphia, announced his candidacy recently, and Humphrey’s drawn to him as well.

In terms of personal aspirations, Humphrey approaches his political future with caution.

“One thing that I try to keep in my mind is that if I do want to run, it can’t be because I want to have power,” he said. “It can’t be because I’ve always dreamt of being a representative, or always dreamt of being a senator. It’s going to have to be like ‘I think I am the best person right here and now to be able to bring in voices and then lead whatever I’m leading.’”

A friend from the Pitt Serves community assistant’s program, Rosie Hogan, has high hopes for Humphrey’s future. According to Hogan, one of Humphrey’s greatest strengths is his ability to connect instantly with anyone he meets. She says he makes everyone feel heard.

“I know he will be in a space where change and advocacy is at the center of his work,” she said. “Though cliché, I am confident that Cedric is a political voice for our generation.”

Watching Humphrey on a presidential town hall stage, he doesn’t look out of place. In fact, he exudes confidence when calling out Biden for an infamous gaffe — telling Black voters “you ain’t Black” if they were undecided on whether to vote for him or then-incumbent President Donald Trump.

Humphrey said many people in this country, both left and right, feel the government fails them — and until elected officials speak to that, disillusionment will only worsen.

Through his work with SGB, Pitt Serves and Fetterman, Humphrey’s fought that disillusionment with compassion, his weapon of choice. Though his time at Pitt draws close to an end, his work going forward just might bring the world closer to Humphrey’s dream of an era of empathy.