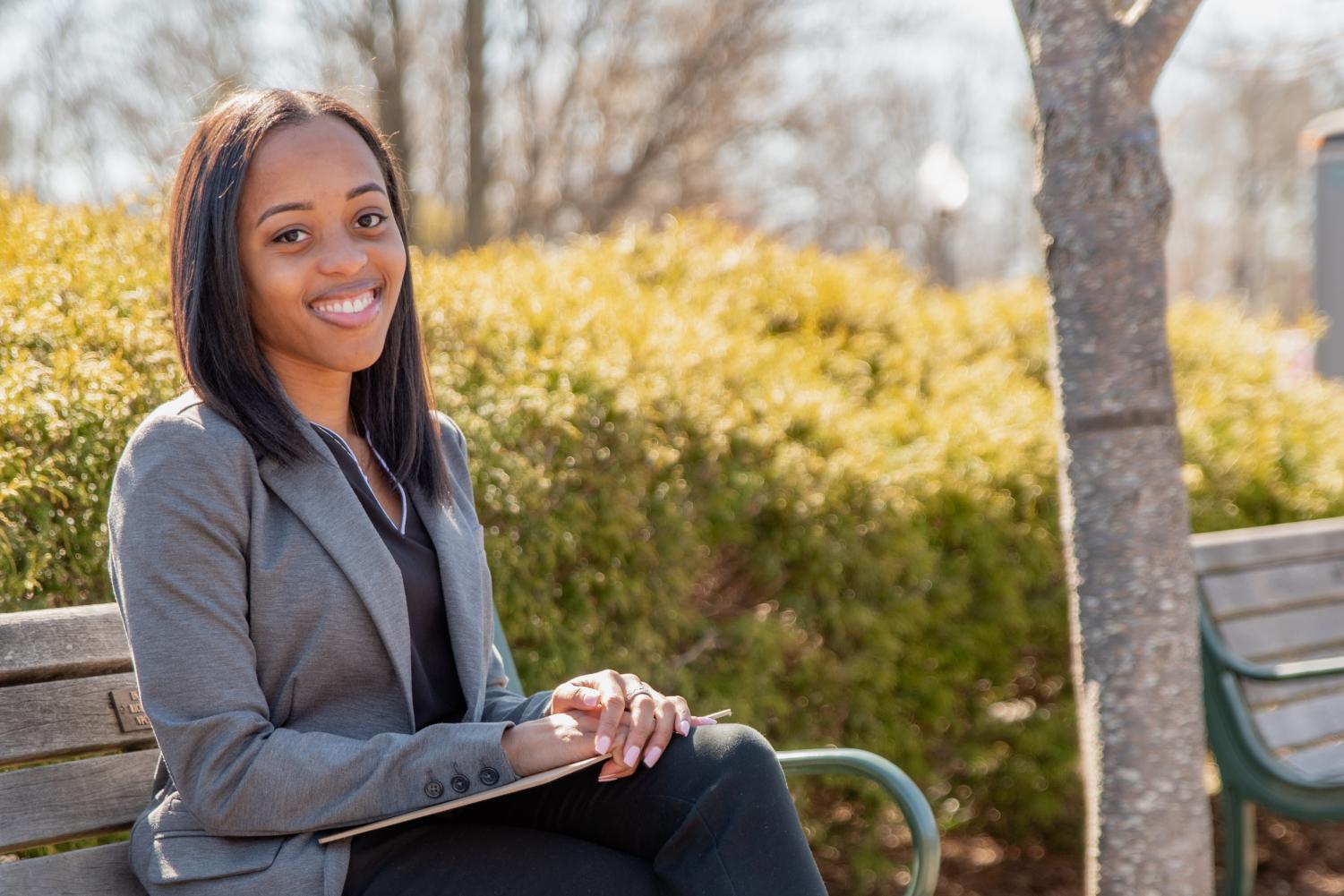 Sydney Massenberg: Building a community to house everyone

Robinson Rice-Bonneau, an 8-year-old boy, is busy most days navigating online math and history classes amid the ongoing COVID-19 pandemic. But during his breaks, the only child sometimes gets lonely. That is until he opens letters from his pen pal — Sydney Massenberg, a first-year law student at New York University.

The letters are simple, yet conversational. “I heard your school's going good” or, “What do you like to do?” Simple is perfect for Robinson, though. He got so excited after the first letter, he wrote back the same day.

While finding time to write an elementary student between classes on contracts and property law is difficult, Massenberg doesn’t let obstacles — even a pandemic — get in the way of making new connections. Chris Bonneau, Massenberg’s former political science professor and Robinson’s father, said this story perfectly demonstrates Massenberg’s character.

“She's somebody who's very forward-thinking, and who's concerned about larger issues and more than just herself and her own self-interest,” Bonneau said.

When Massenberg graduated from Pitt last spring, she left behind an enduring legacy. A political science and psychology double major, Massenberg was involved with a number of community service and activist organizations during her four years at Pitt. She gained a lot of media attention last summer, following a petition she penned pushing for a Black studies course requirement.

The petition — which has since gathered more than 7,000 signatures — eventually attracted the attention of the University. Pitt’s Faculty Assembly and Student Government Board each passed resolutions that supported her idea. A working group in the Office of the Provost is currently weighing the details of implementing the course requirement. The University also adopted a required one-credit asynchronous anti-Black racism class that began last fall for first-year students.

Part of Massenberg’s desire to push for a more equitable campus came from last summer’s events — she released the petition just days after George Floyd’s brutal killing at the hands of Minneapolis police, which sparked massive protests nationwide, including in Pittsburgh. But she said a lot of it came from her experience attending Pitt as a Black student, compared to her more diverse hometown of West Orange, New Jersey. Pitt’s Black student enrollment has decreased by nearly two-thirds in the past 40 years, with Black students making up just above 5% of the student body.

“It was definitely different from my high school, my public school experience at home, just because l had never been the only Black person in a room, and at Pitt I think there were definitely a few times that I was, especially in a smaller classroom,” Massenberg said. “I think people in leadership sometimes can't help but not pay attention to the minority. And I don't think that's an excuse. I don't think that's acceptable.”

She said she was particularly impacted by Antwon Rose’s death, as well as former President Donald Trump’s 2016 election victory during her first year of college. She recounted professors crying during lectures and cancelling classes altogether, which helped her feel reasonable in her own grief. Trump’s election is what ultimately motivated Massenberg to pursue a career in politics, she added.

Massenberg is well on track for this career. She’s now completing her first year of law school at NYU, and is likely to become the first lawyer in her family. Massenberg said she chose this path because it’s where she feels she can most help her community — wherever that may be.

“There's a lot of different causes I care about, and I think I've always found it sort of hard to figure out where to go to help address these things,” Massenberg said. “But I think being a part of the legal community just makes it really a lot easier to find out how to do these things.”

One of the causes Massenberg has gravitated toward is prison abolition. During her senior year of college, she joined the Coalition to Abolish Death by Incarceration — a volunteer organization dedicated to ending life sentences without the possibility of parole in Pennsylvania — and attended multiple protests in Pittsburgh and Harrisburg. Massenberg hopes to continue this work either directly or indirectly through practicing housing law. She hasn’t completely ruled out running for a political office either.

“Housing is an issue for everybody,” Massenberg said. “But it's especially an issue for minorities, for Black people, for people who have just gotten out of prison who now can't secure housing because of their record.”

A class piqued Massenberg’s interest in abolition — a common thread throughout her advocacy. For her senior year political science capstone, Massenberg took an Inside-Out class taught by Bonneau. The course had 32 students — 16 Pitt students and 16 incarcerated students from the State Correctional Institute in Somerset, located about an hour southeast of Pittsburgh. The students wrote papers, did presentations and discussed the topic of mass incarceration.

When meeting her incarcerated classmates, Massenberg said she was “nervous.” The setting, she described, was quite different from a typical Pitt classroom. Students couldn't bring in metal, wear certain types of shoes or tight-fitting clothes or bring in technology. But after some time, the Pitt students acclimated to the environment. Even though Massenberg can’t keep in contact with her incarcerated classmates, she still considers them “really close friends.”

“On the last day, and the last few days, they all sort of shared with us that they really weren't sure about this coming in, but toward the end, they were sad to see us go,” Massenberg said. “So that was really really cool.”

I interviewed Massenberg for the first time last summer, right after she released the Black Studies course petition. At my job, I interview dozens of people — hundreds, really. But Massenberg stood out — her passion, her words and her drive to push for change at a University she no longer attended.

“I think it’s important to enact change in your own community before you try to fix the world, and Pitt will always be my community,” Massenberg said at the time.

After the interview, I remember thinking, “Wow, I just talked to someone who's going to be really important one day.” So I wasn’t surprised when her friends — who were also in her Inside-Out class — shared similar sentiments.

Jordan Fields, a 2020 Pitt alumna who will attend Pitt’s School of Law next fall, said Massenberg is someone who has a “profound impact” on any community of which she’s a part of. Fields and Massenberg grew up in the same county in New Jersey, but didn’t become close friends until their shared capstone class in fall 2020.

“She is just such a bright person who cares and acts with integrity in ways that I think a lot of people don't,” Fields, a policy coordinator in the City’s Office of Equity, said. “I think we will have the power to create some level of change in this country, whether it's at the local level or at the national level I don’t know, but she’ll certainly be a part of that change in our lifetime.”

Fields shared more than just a class with Massenberg, though. Fields — who has also pushed for reform in Pitt Athletics — said their similar backgrounds helped her connect to Massenberg, and gave her a friend to help navigate being a Black woman in law and politics at Pitt. They even discussed some of these experiences on Fields’ podcast, “Black Girls Talk Back.” Mixed in with the more serious discussion of race and politics is lighthearted chatter about their favorite New Jersey staples — pizza, bagels, beaches and musicians.

“I really appreciate having somebody that looks like me and has the same experiences and background as me and is in the same field as me to really lean on and just talk to,” Fields said. “We almost have what feels like a moral obligation sometimes to speak up when things happen and go awry on campus, especially when it pertains to Black students.”

In her personal life, Massenberg is known for her upbeat energy and humor. Though she currently lives in New York City — which she appreciates because there’s “always something going on” — she makes time to visit her parents and brother, a private investigator, in New Jersey. She enjoys traveling, cooking, jogging, watching “Grey’s Anatomy,” writing letters to Robinson as well as defending New Jersey against its bad “Jersey Shore” reputation from Pennsylvanians.

“Anyone who knows me well knows how much I love New Jersey and hates me for it,” Massenberg laments. “When people want to come for New Jersey, I'm usually ready to shut them down.”

When asked about her “dream career,” Massenberg isn’t totally sure of her next steps — “I don’t dream of labor,” she jokes. But she does know she wants to continue advocating for a cause she cares about, whether that’s prison abolition, housing equity or something new. Massenberg uses the movie “Soul” — which tells the story of a middle school band teacher whose soul gets separated from his body right before he gets his big break as a jazz performer — as a benchmark.

“I need to make sure I'm just doing things that I like to do because I like to do them,” Massenberg said. “I want my legacy to be someone who helps contribute positively to every community she's a part of.”