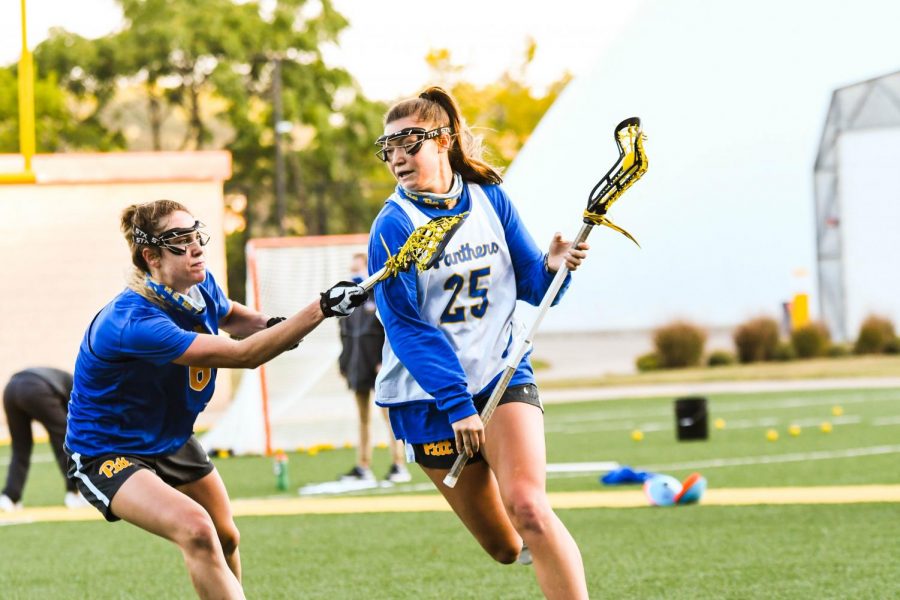 By Jessica McKenzie, For The Pitt News

The Pitt women’s lacrosse team began gearing up for 2022 — its first competitive season — in summer 2019, when Emily Boissonneault was introduced as the varsity women’s lacrosse head coach. As the end of spring approaches, Boissonneault’s newest team is preparing for an uphill battle in 2022.

Boissonneault signed the first five lacrosse players to the team in fall 2019, and the roster has grown to 14 since. As small as the team is right now, the team has focused on improving the skills of individual players through games of seven-on-seven and one-on-one. According to Boissonneault, 19 additional first-year players will join next year when the competitive season begins in spring 2022.

When recruiting players, Boissonneault sought out natural leaders who had a deep passion for the sport and a strong desire to compete.

“It’s a different kind of commitment when you’re coming to a starting program,” Boissonneault said. “I talked to the girls about the competitiveness of the ACC and how hard it is. It’s going to be a grind every single day and we have to love it, we have to be resilient.”

The team begins each day with strength and conditioning workouts for an hour and a half, followed by a two-hour practice. According to Boissonneault, on Wednesdays the team participates in a leadership academy program to help the players develop off the field, in addition to honing in the leadership that is necessary to succeed next year.

Boissonneault and the team’s assistant coaches, Regy Thorpe and Haley Hicklen, have prepared the team for the competitive season by implementing strategies to win games into daily practices — including draw control, which Boissonneault believes plays an essential role in winning games consistently.

This plan of action proved effective recently, when the team played its first scrimmage against Slippery Rock University on March 5. Although the squads didn’t post an official score from the scrimmage, sophomore attacker Carlie Leach felt that the team communicated well in its first time playing against another opponent.

“As a group, we communicated efficiently and bought a lot of energy into [the game],” Leach said. “I was nervous that my teammates were going to be super nervous to play another opponent … but I was really confident in our group. We did really well.”

Boissonneault thought the scrimmage was a great opportunity for both teams to get a taste of some game action as well as provide the coaching staff with an opportunity to evaluate how the team was developing.

“We tried to make it as gamelike as possible,” Boissonneault said. “It was an opportunity for us to see what we would like in a game — and we took a lot away from that.”

Leach transferred from the University of Oregon, in the state she calls home, to Pitt this semester. Although the idea of transferring to a school nearly across the country amid the COVID-19 pandemic initially intimidated Leach, she has since formed strong relationships with her teammates on and off the field.

“I’ve made some of my best friends in the time I’ve been here, which is crazy to think about because I can’t picture my life without some of these girls,” Leach said. “I’ve only known them for about three months now.”

While the pandemic pushed most people out of their comfort zone, it offered the athletes in the senior class of 2020 another year of eligibility to compete. Graduate student defender Therese Pitman decided to redshirt before her fifth year of collegiate lacrosse, granting her the opportunity to play during both of her years of graduate school at Pitt.

A Siena College graduate, Pitman was attracted to Pitt’s program because of Boissonneault’s impressive resumé as a coach. Before coming to Pitt, Boissonneault coached James Madison University to four consecutive appearances in the NCAA tournament and a National Championship victory in 2018. Additionally, Pitman was thrilled at the idea of being a part of history and helping to prepare the Pitt women’s lacrosse team for its first competitive season.

“I’m a person that’s constantly looking to make a difference,” Pitman said. “I’m a public policy student, so it was really cool that I could have the opportunity to come to a place where every practice and every competition and every game and every person we interact with is a moment in history.”

Pitman credits her coaches with building her confidence as a player. The coaches boost their players’ confidence through a positive and engaging environment — including practicing in costumes and putting the sticks down for a little bit and playing team bonding games such as kickball on Fridays.

Although next year’s competitive season seems like a long ways away, Pitman and the rest of the team can focus more on their individual skills at their positions, ultimately building a stronger chemistry as a whole. Approaching the summer, half of the team will stay on campus to train together. In the fall, players are expecting a normal season of tournaments. The following semester, the much anticipated competitive season will begin.

“I like to think that this isn’t just about me, and it isn’t just about the team we have right now, but it’s about building this program for years and years to come,” Pitman said. “It’s empowering women that come after us to be able to play in this really cool space.”