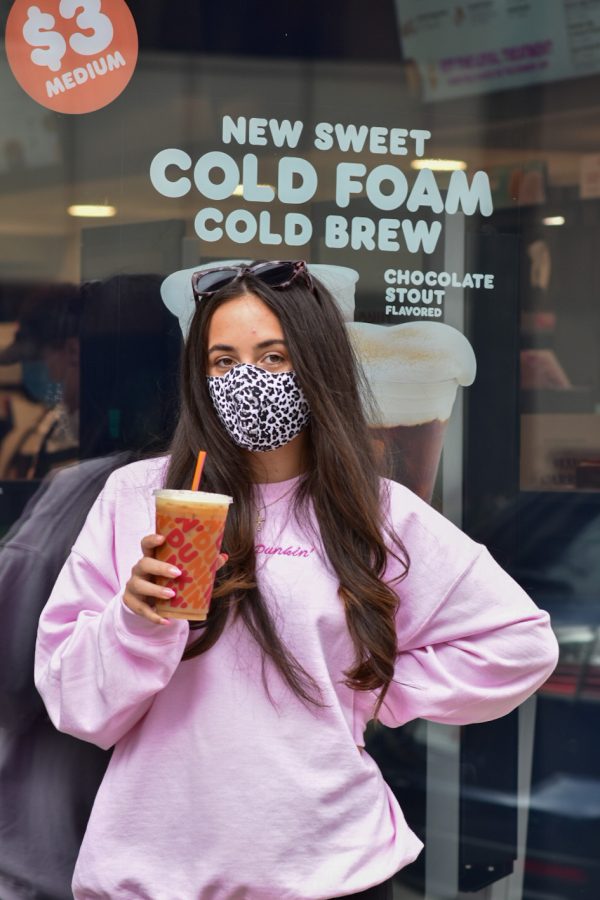 Sophia Cosentino, a Pitt 2020 alumna, won the Dunkin’ menu contest on TikTok in early March and got her order named after her at her local Dunkin’.

For Sophia Cosentino, her mornings often include a trip to Dunkin’. But this March, her order sounded a bit different.

Cosentino, who graduated from Pitt last April, won the Dunkin menu contest on TikTok in early March and got her order named after her at her local Dunkin’. Dunkin’ and most-followed TikToker Charli D’Amelio asked TikTok users to submit a video of them explaining their order using the hashtag “Dunkin’ Menu Contest” to get their order named after them at their local store.

The Dunkin’ menu contest hashtag on TikTok has over 36 million videos, and Cosentino was one of the 10 winners. In Cosentino’s TikTok, she says her order is a medium iced coffee with one pump french vanilla swirl, skim milk and one splenda — now known as the Sophia. The Sophia was available from March 17 to March 24, at the Dunkin’ on Liberty Avenue in Bloomfield.

Cosentino, who currently works as an administrative assistant in the Hillman Cancer Center, said she started drinking Dunkin’ regularly her first year at Pitt. She lived in Towers her first year and was in the business school, so she always went past Dunkin’ on Forbes Avenue and said she came to love the franchise.

“I started drinking it really regularly freshman year,” Cosentino said. “We had one near my high school so I went every once in a while but definitely the Dunkin’ on campus at Pitt was the one that I started going to all the time.”

Chelsea Halker, marketing and guest services manager for Dunkin’, said customers can order the Sophia even if they aren’t going to the Bloomfield Dunkin’.

“A number of our locations specifically in the City and Oakland can also make the drink,” Halker said. “So we actually had a lot of customers coming into our other locations, requesting that drink and they can, they have all of the ingredients to make it. So it can really be done at any of our locations but it’s on the menu board at the Bloomfield location.”

According to Cosentino, the first time she tried to order the Sophia on the first day of the promotion, the barista didn’t know what she was talking about. She said while it was a “check to her ego,” she thinks ordering a drink named after her is fun.

“I was like, ‘okay I need to check myself. I’m a little too excited about this,’” Cosentino said. “But it’s definitely fun. They know me there now for me being in there with a couple of different little press things and wanting to do pictures so I think I’m just gonna keep ordering it with my name just because it’s fun. And we’ll see as they hire new people and they’re like who is this girl? Who does she think she is? But you feel special. I feel like Charli D’Amelio.”

According to Halker, the Sophia has brought in many customers who wanted to try the drink named after another Pittsburgher. She said the Sophia has been a really successful promotion and she wants to see it stick around for a little while longer.
“I would love to see the Sophia stick around a bit longer than the duration of the promotion,” Halker said. “Because I think it’s something that has gotten picked up from a lot of media here locally in Pittsburgh and a lot of local people are pretty excited about it. We’ve had just random guests coming in to, like, all stores far and wide, so I could see it definitely sticking because I love that tie to Pittsburgh too.”

Manushree Karthik, a first-year psychology major, said she ordered the Sophia at the Dunkin’ on Forbes Avenue, but they didn’t know what it was at first.

“I tried the Sophia and it was good,” Karthik said. “I don’t usually get sweet coffees but I saw the drink in the news and decided as a Dunkin’ fan and a Pitt student I had to try it. Even though they didn’t originally know what the Sophia was, I really liked it.”

Cosentino said she loved seeing her name on the menu at Dunkin’, and even though her drink isn’t available under her name anymore, she still wants it to be known as the Sophia.

“I’m trying to convince them to keep it up,” Cosentino said. “And also I think I’m going to try and convince them to put it on the menu in Oakland. I don’t even know who to call. I was with one of their PR people and someone who works for the company that kind of owns that franchise and they were saying people were liking it so … never say never — it might stick around.”

Halker said she would not be surprised to see another contest like this one sometime in the future as Dunkin’ Donuts is successful on TikTok and other social media platforms.

“I wouldn’t count it out for sure,” Halker said. “Dunkin’s always finding new ways to engage with fans on social media and they’ve really been kind of ahead of our competitors when it comes to TikTok, and I think it’s just such a young brand that has done a lot of really great and innovative things on social media so I for sure see it coming back something similar.”