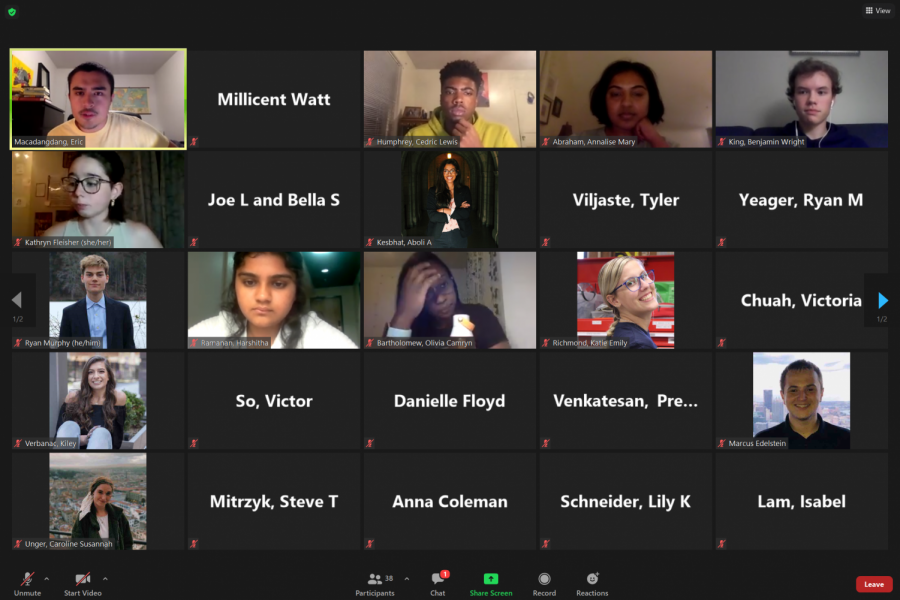 Student Government Board held its weekly meeting on Tuesday night via Zoom.

At Student Government Board’s public meeting on Tuesday night, President Eric Macadangdang reflected on one of his first speeches as SGB president to the University Senate Council in June, the same month that experienced an uproar of Black Lives Matter protests in response to the killing of George Floyd by a Minneapolis police officer.

“I remarked at that meeting that the constant killing and brutalization of Black Americans is not new in America, and in fact, it’s been a part of its identity since its inception,” Macadangdang said.

As Derek Chauvin, the police officer who killed Floyd, stands trial for Floyd’s death, another police officer fatally shot Daunte Wright, a 20-year-old Black man, on Sunday in a nearby Minneapolis suburb. Floyd and Wright are two of many unarmed Black people who have been killed by police.

Macadangdang said the United States has gone through a “multitude” of cycles where Black lives have been lost to white supremacy and police brutality, and “hollow reactions” and “complicit inactivity” have stalled real change.

“These are deeply systemic issues, embedded into the very fabric of our daily lives,” Macadangdang said. “It’s imperative to acknowledge this fact and to propose solutions accordingly. Ones that rebuild and reimagine public safety and criminal justice, not ones that just nibble around the edges.”

Board member Kathryn Fleisher said SGB will continue to support the Black Senate and Black students by backing the Black Senate’s demands and upholding police accountability.

“Student Government Board as an institution, as well as myself as an individual, [will] continue to scream from the rooftops that Black lives matter and that we will continue supporting the demands that the Black Senate released this past summer, and working for accountability, both on campus in our City, and across the country,” Fleisher said.

With the semester coming to an end, Macadangdang said he, president-elect Harshitha Ramanan and both incoming and outgoing board members conducted “over two dozen” interviews with committee chair applicants last weekend, after applications closed on April 5.

Macadangdang said this weekend, he, Ramanan and the incoming and outcoming board members will conduct more interviews for applicants who applied for SGB’s standing committees — allocations, judicial and elections — as well as the diversity and inclusion committee. Applications closed this past Monday and committee members will be announced at next Tuesday’s public meeting.

Macadangdang said SGB is taking the “final steps in transitioning our leadership” and welcoming Ramanan and the incoming board. Macadangdang encouraged Pitt students to register for the inauguration on April 15 at 5:45 p.m.

Ben King, vice president and chief of finance, introduced Bill 2021-3, titled Constitution Alignment Changes, for consideration of the board. King said the bill will implement changes to the SGB Governing Code so it can be “consistent with the revised constitution.” These include changes to the vice president positions, establishing the Assembly as a “representative advisory body” to the board and connecting board members to conditional committee chairs.

Recommended changes include delaying election result announcements to allow complaints to be filed within 24 hours of polls closing, utilizing “student-body-wide emails” for “more comprehensive and effective communication” and having the elections committee conduct independent investigations on complaints.

Macadangdang said voting for both Bill 2021-3 and Bill 2021-4 will take place at next Tuesday’s public meeting and both are available on SGB’s website under the “legislation” and “bill” tabs. Macadangdang said he encourages all students to look at the bills and provide any recommendations or feedback before voting next week.

SGB hosted a public art competition in partnership with Provost Ann Cudd’s Public Art on Campus initiative. Last week, Andrea De Leon, Millie Rodriguez and Trisha Shah were announced as the three finalists, and Pitt students had until 5 p.m. on Tuesday to vote for their favorite design for a mural they want to see on campus. De Leon won with 42% of the votes.

In his closing remarks, Macadangdang urged Pitt students to stay connected with SGB through its virtual office hours, Fix It Pitt! forms or through email.

“Our work is to support every student, and this is work that is greatly improved when students engage in the process, and let their voices be heard,” Macadangdang said.

The allocations committee received two requests with a total of $1,712.19. Both requests were approved in full and no requests required board approval.

A previous version of this story listed the wrong changes for Bill 2021-3 Constitutional Alignment Changes. The article has been updated to reflect this change. The Pitt News regrets this error.