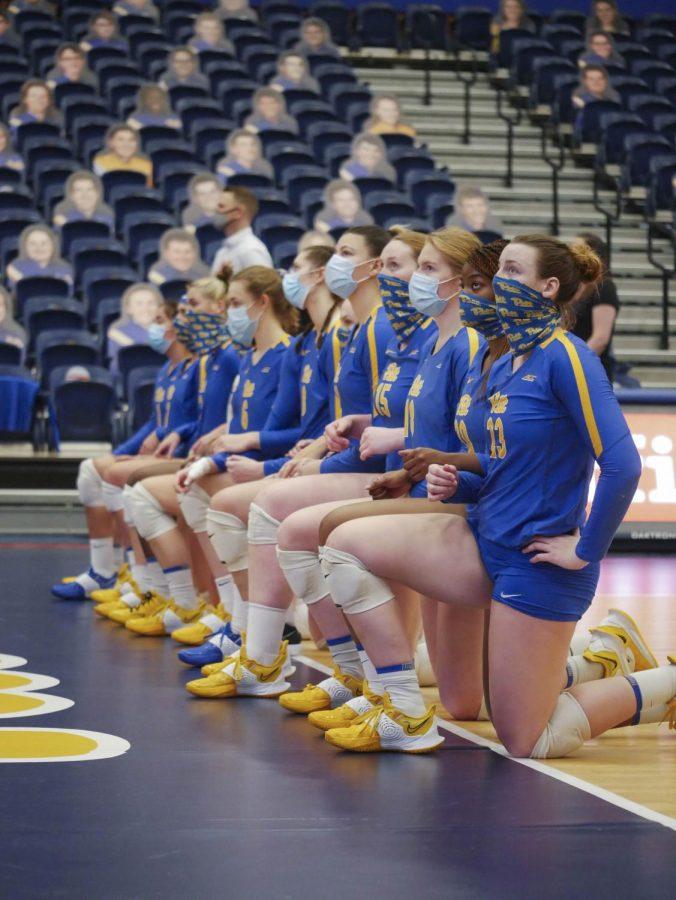 Pitt volleyball’s NCAA tournament campaign begins on Wednesday at 10:30 p.m. against LIU and continues with Utah the next day if the team advances.

More than 16 months have passed since Pitt volleyball’s last postseason match, a devastating five-set loss to Cincinnati that spurred gut-wrenching images of the seniors’ reaction following the shocking end of their careers.

But the Panthers have returned to the NCAA tournament, looking to overcome the early-round woes they’ve had in years past, starting with their late-night, first round matchup against Long Island University. The matchup will take place on ESPN3 Wednesday at 10:30 p.m. in Omaha, Nebraska.

Amidst a season altered by the COVID-19 pandemic, it’s difficult to gauge the Panthers’ resumé entering the tournament. The team only played 20 regular season matches across the fall and spring, 10 less than the previous year.

More importantly, Pitt could only schedule two non-conference opponents this year, both against mediocre programs. With the ACC lacking the prestige of volleyball powerhouses like the Big Ten and Pac-12, tuneups against strong competition in the regular season can go a long way in preparation for the big stage.
Pitt (16-4, 14-4 ACC) comes in with its worst end-of-season win percentage since the team’s first NCAA tournament appearance under head coach Dan Fisher in 2016. The Panthers looked out of sorts in the fall, going 4-4 in a conference-only slate. But the team drastically turned things around in the spring, going 12-0 to launch itself back into the NCAA tournament conversation.

But after failing to receive a national seed during the selection show, Fisher said the team started getting nervous, until it finally heard its name called late in the process.

“The initial reaction, just because they announced us almost 45 minutes into the show, was like a relief of ‘okay, we did make it,’” Fisher said. “After that passed, I think we’re an 18 or 19 seed which is right around where we are in the coaches’ poll, so I think we’re pretty close to where we thought it would go.”

The Panthers received LIU as their opening draw, a team coached by Ken Ko, a friend of Fisher. The Sharks didn’t start their season until the spring, going 8-5 to earn the No. 2 spot in the Northeast Conference standings, setting up a rematch against Sacred Heart University in the NEC championship to determine the conference’s automatic NCAA tournament qualifier.

The Sharks lost two thrillers to SHU in the regular season, but the third match never occurred. The NEC cancelled the championship after a positive COVID-19 test in the Sacred Heart program, sending the Sharks to the Big Dance for the 12th time in program history.

A strong defense has pushed LIU this far. The team ranks 19th in the country in digs per set, and junior libero Anastasia Scott ranks 12th individually. Pitt’s frontline will need precision with their attacks to end points quickly. Because of his relationship with Ko, Fisher said he already had a familiarity with some of the Sharks’ roster before this week.

“They historically have had a fair amount of foreigners,” Fisher said. “Getting foreign players to want to go to New York City seems to be something that they are able to do. From what I’ve seen so far, they have some very good pin hitters that are going to cause us some problems.”

If the Panthers defeat the Sharks, the No. 14 seed Utah Utes will stand in between them and history the following day at 10:30 p.m. Since its first season in 1974, no Pitt team has ever made it past the second round of the NCAA tournament. While sporting a 7-8 record in first-round matchups, the program has lost in all seven of its second-round appearances, including the past four seasons.

The Panthers beat the Utes 3-1 in a road bout last year, but Fisher knows they will certainly have their hands full this time around, led by Pac-12 Coach of the Year Beth Launiere. Utah senior outside hitter Dani Drews, the nation’s leader in kills per set, enters the tournament with some daunting attack numbers.

“They’re one of the best teams in the country,” Fisher said. “They’re very good.”

Drews’ capabilities present a potential nightmare matchup for the Panthers. Pitt’s last season ended at the hands of Cincinnati’s Jordan Thompson, who had set the NCAA record for kills in a season shortly before the two teams met. Pitt will have to successfully navigate past yet another transcendent offensive talent to reach the third round for the first time ever.

Because of COVID-19 protocols, the NCAA will hold the entire tournament in Omaha, Nebraska. This means for the first time since 2017, Pitt will not host its first round matchup. Senior outside hitter Kayla Lund — who recently became the first player in conference history to win the ACC Player of the Year award twice — said after a win against UNC that the team’s experience playing without fan attendance this year will help them in the postseason.

“Any quiet gym we’ve kind of found a way to thrive in because our bench is unbelievably loud and feisty and just has so much energy,” Lund said. “Wherever we go, whether it’s quiet or whether it’s loud, especially if it’s quiet we know that we’re at least gonna bring some noise with us.”