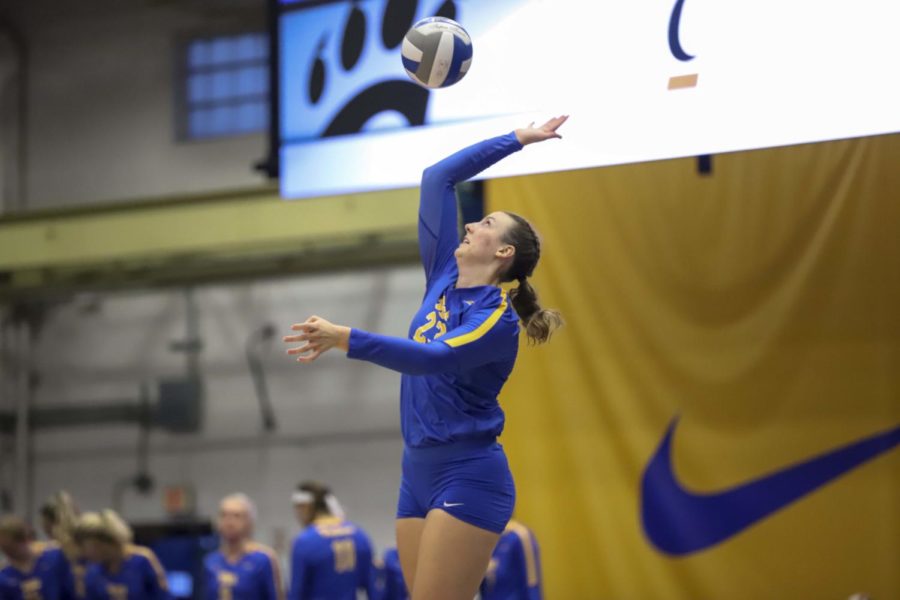 Senior outside hitter Kayla Lund put away three crucial kills at the end of the first set.

Pitt volleyball rewarded its dedicated fans who stayed up for its late-night NCAA tournament bout with Long Island University in Omaha, Nebraska. The Panthers (17-4) avoided an early scare by sweeping the Sharks (8-6), advancing to the second round for the fourth straight season.

While the final score may have resembled a blowout, it certainly didn’t feel that way in the first frame. Pitt started the first set with a 6-0 lead, but the Sharks responded with a 5-1 run out of a timeout. As the two teams traded punches, Pitt kept LIU on its heels with a dual threat of setters. Sophomore Lexis Akeo and redshirt senior Kylee Levers alternated at the position, racking up seven and six assists, respectively, in the first game.

While back-to-back block assists involving sophomore middle blocker Chiamaka Nwokolo provided some late-game breathing room, the Sharks immediately battled back to tie the set at 23. That’s when the most decorated player in Pitt volleyball history stepped up.

Senior outside hitter Kayla Lund, fresh off becoming the first two-time ACC Player of the Year, showed exactly why she’s built such an esteemed reputation. After the Sharks evened it up, Lund put away three of the next four points with high-velocity kills, giving Pitt the first game 26-24.

“We struggled offensively in the first set, and I kind of was just like, ‘I’m over this, let me just take over a little bit,’” Lund said. “Which is something that I need to do and love to do and am honored to do on our team because we have offense all over the place and we have girls that can get the job done.”

Pitt got off to another solid start in the second set, jumping out to an early 6-2 lead. This time, the Panthers never looked back. Pitt head coach Dan Fisher dug deep into his bench for the second set, giving redshirt first-year middle blocker Anastasia Russ and first-year outside hitter Cat Flood a chance to step up.

Of the 72 sets Pitt played in the regular season, Russ only appeared in 11 and Flood saw the court in just eight. The two stepped up in Wednesday’s spotlight, though. Russ, with her 6-foot-5 towering presence, finished with four kills on four attempts — a perfect 1.000 hitting percentage — and added two blocks.

“[Junior outside hitter] Jordan [Lockwood] wasn’t producing very well offensively, and Anastasia’s someone that’s been training really well in practice so we made the switch,” Fisher said.

Pitt combined for 12 blocks — its third highest total of the season — but the frontline didn’t provide the only stellar defense on Wednesday. Sophomore libero Ashley Browske led the bench with eight digs on the night, but none more important than a diving save early in the second set. The point looked lost for the Panthers, but Browske’s play kept the rally alive, setting up a block from Russ and Nwokolo to give Pitt a 9-4 lead. The Panthers cruised to a 25-11 second set win.

Plays like Browske’s got the Pitt crowd on its feet — and there certainly was a crowd. Although the Omaha gym had limited capacity due to COVID-19 restrictions, the Panthers made the most of their 86 allotted tickets, thanks in large part to junior middle blocker Sabrina Starks. A Springfield, Nebraska native, Starks grew up about 30 minutes from Omaha. The connection turned out surprisingly helpful on Wednesday, with over half of the Pitt crowd coming from Starks’ fanbase.

“I feel like our court was super loud,” Lund said. “We knew that a lot of us were going to have our family here, plus all of Sabrina’s neighborhood and town is here, but it was cool to see just how loud they were and actually I think they’ll really help us in this tournament.”

After the dominant second frame, Pitt took advantage of the momentum and cruised to a stress-free 25-10 third set victory. Lockwood put away the match with a kill off of a Browske assist, and the Panther bench stormed the court in celebration.

Pitt now moves onto the second round for a showdown with No. 14 Utah, a stage that has doomed the Panthers time and time again. The team’s last four seasons ended in the second round, and no Panther squad has made it to the third round in program history. Fisher didn’t back down from the significance those past failures will have on the team’s mentality on Thursday.

“They’re thinking about it, of course we’d like to advance,” Fisher said. “It’s hard to get past that round of 32 for anyone. With every round the teams get tougher.”

For Pitt to break that streak on Thursday, it will have to contain Utah star outside hitter Dani Drews, who leads the nation in kills. Cincinnati’s Jordan Thompson, who broke the NCAA record for kills last season, ended the Panthers’ campaign in 2019, and the Panthers will do everything they can from stopping a similar fate against Drews.

“Having a good defensive plan against her will help, limit her range and limit the kills she’s bound to get,” Lund said. “At the end of the day, I think it’s going to come down to our side of the net and making sure that we’re firing from all different zones. Making sure that we have good defense against everybody.”

The Panthers have little time to celebrate Wednesday’s win, returning to face the Utes on Thursday at 10:30pm.