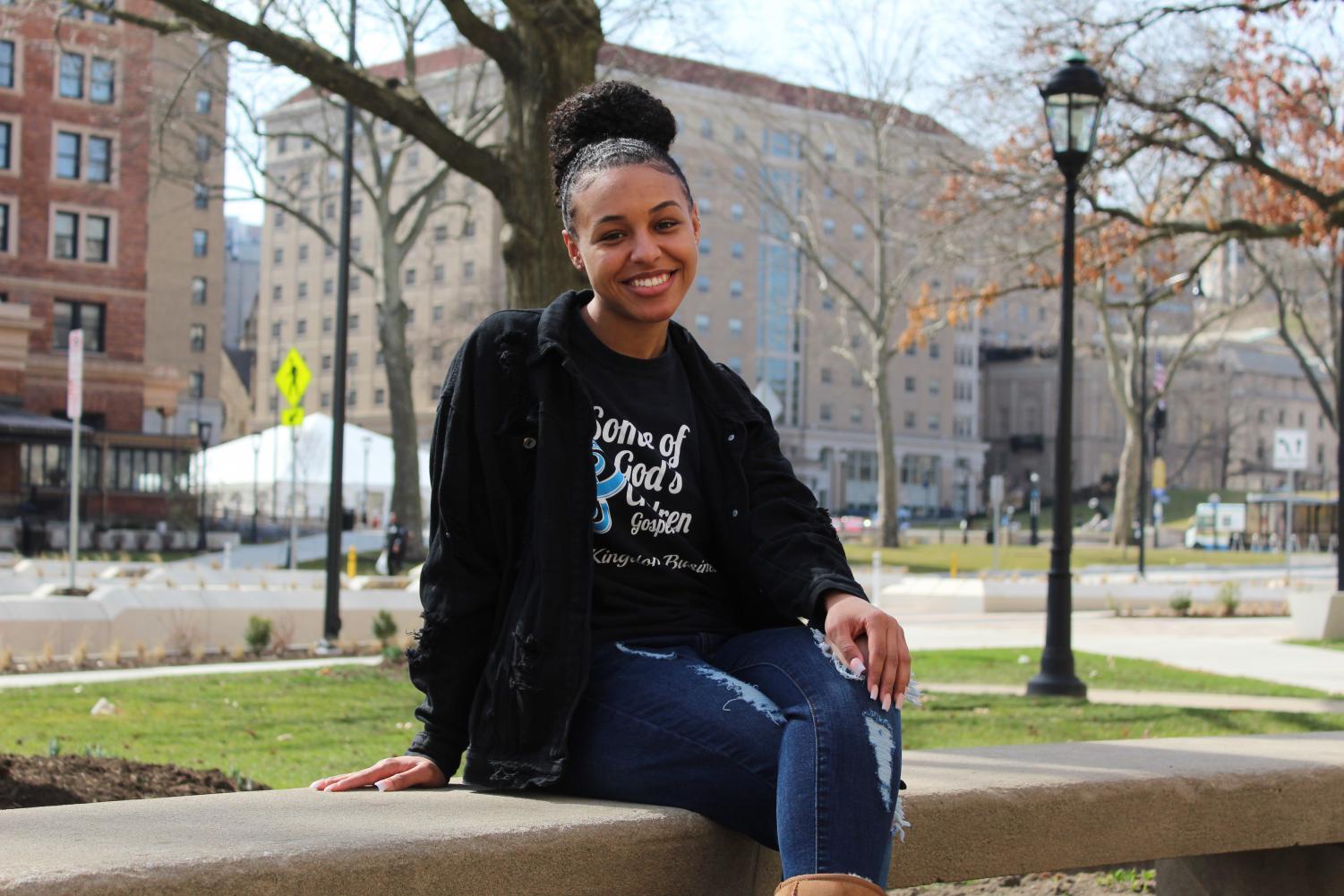 For Mikala Aleksandruk, listening is leading.

Aleksandruk, a senior health services major, is the president of Some of God’s Children Gospel Choir, whose mission is “to proclaim the Word of God through song so that students may grow in relationship with Christ." She is also a member of the Black Senate, a representative group of the leaders of Black Pitt student organizations.

Sherdina Harper, the adviser for the Black Action Society as well as Some of God's Children Gospel Choir, said Aleksandruk ensures that all opinions are heard.

“I think she's a good leader because she’s a good listener,” Harper said. “A good leader is a person who listens to her peers, she cares about what they're saying and sometimes, even if it's not exactly her perspective, she understands the importance of making sure students’ perspectives are heard. Sometimes leaders have to put away their own ways of doing things.”

Aleksandruk said with the COVID-19 pandemic and civil rights movement in the past year, her passion to serve minorities and underrepresented groups has grown and that the summer of 2020 was the catalyst for her to become more involved in social issues. She added that her love for Christ is what helps her get through difficult times like this.

“With everything going on in 2020, I became even more passionate just about serving people in general,” Aleksandruk said. “I think a lot of Black students were feeling burdened. And that’s why I really started to get involved with the Black Senate, specifically with Pitt police reform, and some relationship building with them. That’s so needed right now.”

As president of Some of God’s Children, Aleksandruk sits on the board of presidents for the Black Senate. BAS and 17 other Black Pitt student organizations joined together last summer to release a list of demands to the University administration, which included amplifying the Black student voice and increasing the number of Black students and faculty, as well as other ways Pitt can improve to make life better for its Black students.

“Especially going back to school in the fall of 2020, we were like ‘we need support, we need understanding, we need resources because we’re coming back with so much on our plates,’” Aleksandruk said. “Writing those demands was such a release. For me, there’s so many things they could improve on and we’re finally getting to say something about it and demand that change.”

Aleksandruk said she wanted to be able to make life at Pitt better for future students, even though she and the others who created the demands, or “action items,” may not be able to experience the effects.

“With so many viral videos and things being said in politics, I think Black students felt especially burdened and it highlighted how much we weren’t supported at Pitt,” Aleksandruk said. “Pitt has never done a wonderful job catering to its minorities and especially to its Black students.”

Part of the demands was that Pitt police work with students. While other members of the Black Senate met with faculty, administration and department heads, Aleksandruk began working with the Pitt police to form an advisory board of students along with members of Student Government Board. According to Aleksandruk, the group has been meeting with Pitt police every other week since last semester.

“After the demands were put out, members of the Black Senate started meeting with those different entities that we were asking demands for,” Aleksandruk said. “And some students from SGB came in and we started meeting with them every other week with the Pitt police to talk and see where we could improve. There was some really good dialogue that came out of that that we were like, ‘let’s solidify this so this can be a thing going forward and change can continue.’”

Aleksandruk said the administration has been very open and had lots of conversations with students, but there’s still more things they need to do.

“I think those action items were a really good start,” Aleksandruk said. “Black kids are looking at police like, ‘We do not like you, we do not want to talk to you.’ There’s a lot that can be done to effectively keep students safe without presenting triggers or threats to certain groups from law enforcement. Aside from my beliefs about how to reform the legal system, I do know that making Pitt a more welcoming environment for officers and for students is something that I definitely think is important work.”

Much of the work was meetings and communicating with faculty, administration and police, Aleksandruk said.

“We had to do a lot of research, have a lot of meetings with people to make sure we were understanding what we were asking and understanding what was currently in place,” Aleksandruk said. “That was very eye-opening as far as change that needs to be done in Pittsburgh, but it was also really inspiring that we’re able to come together and do that and be on the same page with the change we want.”

Destiny Mann, a junior Africana studies and political science major, is the vice president of BAS and has worked closely with Aleksandruk in the past year. Despite going to many meetings with faculty and administration, Mann said Aleksandruk makes the work more meaningful.

“Honestly, Mikala is the most articulate and well-spoken person that I know,” Mann said. “She knows how to command a room while also being kind and generous. Being a leader at this University, she knows how to get her point across and she knows what needs to be done.”

Mann said Aleksandruk is the kind of person people want to listen to.

“She is like the perfect blend of someone that you want to follow but you also want to be friends with,” Mann said. “You really want to just listen to her and you want to follow her as well. It’s a lot of work and Mikala makes it fun, she makes you want to do the work and she inspires everyone she’s around. Mikala’s always been that person I can rely on. She’s always there. She’s always going to be there to help you.”

For Mann, Aleksandruk is not only a leader, but also a mentor. She makes those around her want to grow. Mann said she was nervous taking over her new role this year as VP of BAS, but Aleksandruk stepped up and showed her ways to be a leader.

“I was obviously very nervous this year coming into my role because no one really gave me a guide on how to navigate, especially since this year has been so different,” Mann said. “But Mikala has always been that person who’s been so responsive, she’s always been that person who lifts me up. Being around her makes me want to do better at the end of the day. I think people expect us just to be like, these activists, or be able to articulate ourselves and a lot of us are just 19, 20, 21, 22.”

Outside of the Black Senate and Some of God’s Children, Aleksandruk also tutors and mentors young women with the Gwen’s Girls program, an organization that aims at empowering young women of color.

“Whether it’s from a spiritual perspective, academic perspective, personal perspective, she cares about all of the students that she serves within the choir and the campus at large,” Harper said. “That’s her as a person.”

Harper said although the past year has been challenging, Aleksandruk has stepped up to the plate.

“I think that the pandemic adds so much pressure, specifically around a choir, who’s used to doing in-person performances,” Harper said. “She’s been extraordinarily creative.”

Harper said she has worked deeply with Aleksandruk in the past year and seen her handle the pressure of the police advisory board very well.

“She’s been very essential in working on the demands from the Black Senate and her charge is the police,” Harper said. “So she is the person that helps develop the questions. She’s moderated the town hall with the police. She’s been responsible for keeping information flowing between all the parties — the participants, the police, senior administration and students.”

Even outside of her role as a leader, Harper said Aleksandruk shows that she cares.

Harper added that Aleksandruk cares for everyone around her, even sending her a surprise text on her birthday.

“It’s just those things that sometimes we don't expect from students and she goes far beyond my expectations of a student,” Harper said. “Her love for Christ is what drives her.”