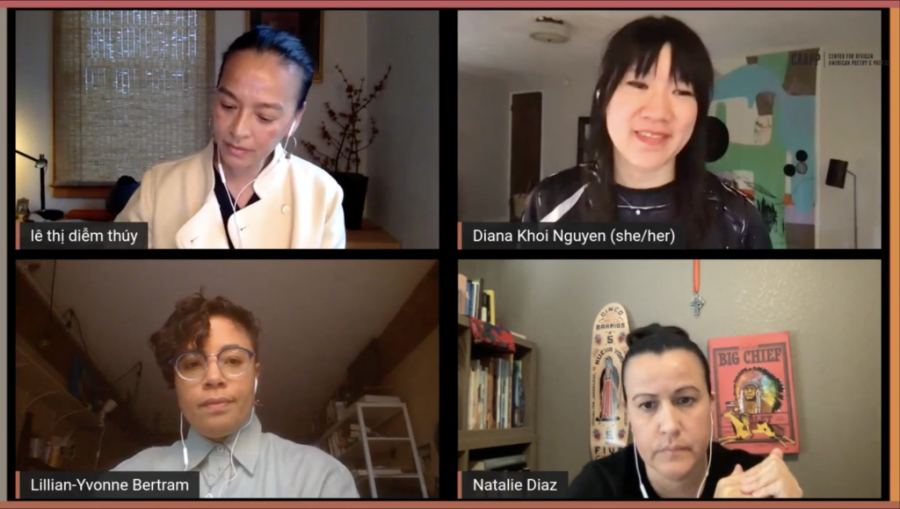 Poet Natalie Diaz’s understanding of sound relies in part on her Mojave culture, which teaches that animals were once people and make noise in mourning for their human bodies.

“Something that’s always struck me is that it’s not clear if they are crying because they want to return to that human life, or if they’re crying for what they might have done when they had a human body,” Diaz said.

Diana Khoi Nguyen, an assistant professor of English writing, curated the event, which included readings, multimedia presentations and discussion from the artists, each of whom use sound in their work for political purposes. Each artist also addresses the experience of diaspora, or the scattering of a group away from its place of origin.

“They all work with contemporary events, but also history, in different kinds of communities in various ways,” Nguyen said.

Diaz’s presentation incorporated coyote calls — which she recorded near her home in the Arizona desert — as the cries of transformed humans. She also showed a new video project, tentatively named “Touch Me,” that explores the sensation of touch as a way of moving away from ocularcentrism, or the privilege often given to sight over our other senses.

The video moved between desert scenes, sounds and images of water rippling, spots of light diffusing across the screen and two hands softly brushing against each other. Diaz said she wanted to use the project to explore touch and its place in her relationship with her partner.

“What is the periphery of touch, and what is touch itself in relationship to an indigenous Latina woman and her Black lover?” Diaz said. “[The video is] a sensory shuffling between my desert and my river and my lover.”

Like Diaz’s “sensory shuffling,” Nguyen said in developing “Of Sounds and Re-sounds,” she wanted to challenge ocularcentrism in art and poetry. The concept of “sounding” and “resounding” comes from the way people respond to the things they hear, and build upon or reconstruct meaning in those responses.

“I’ve been thinking a lot about … the notion of talking back — poems of resistance, or art of resistance,” Nguyen said. “I want to think about the urgency of sound, and how it is a vital part of the instrument of our making, of our engaging, our being communities, but also in reflecting and refracting what we see and what’s going on.”

While Diaz’s work centers around her experiences as an indigenous Latina woman, Bertram’s speaks to the Black diaspora and the representation of Black people in the digital age. Their practice uses computational poetics, meaning they compose poems using computer programs and other technologies.

Bertram read excerpts from a chapter of their 2019 book “Travesty Generator,” which uses code to write haunting poems about anti-Black violence and police brutality. The use of algorithms in this work also reflects on the injustice that technology and computer programs impose upon Black bodies. According to Bertrams, the chapter, called “Coming of Age,” “echoes the wisdom Black mothers pass on to their children.”

“Find a Baptist church. Black folks’ll be there. / And to the Lord, I put my amens. / If there’s a bus, it just might be your friends / who throw you under it,” Bertram read.

Bertram also showed a video of a soundboard programmed with excerpts from “We Real Cool” by the late Chicago-based poet Gwendolyn Brooks. As they pressed buttons on the board, excerpts from the poem played in a jumbled order, repeating the word “we” over and over at various points. Bertram said this kind of repetition, also present in “Travesty Generator,” is central to their work in computational poetics.

“It involves the literal iterating of an algorithm over text. It’s like the base, the foundation of what a lot of my computational work does, but it’s also iterating over memory throughout time,” Bertram said. “Repetition, emphasis and memory aren’t temporally bound.”

Like Bertram, lê confronts acts of anti-Black violence in her work, showing the ways in which anti-Black and anti-Asian racism are linked. As a Vietnamese immigrant, lê’s reading connected the 1968 My Lai massacre to the 1955 murder of Emmett Till, and confronted the dehumanization that the perpetrators of both acts imposed on their victims.

Besides lê’s own writing, the performance incorporated the words of William Calley, the only American soldier involved in the My Lai massacre to be convicted of murder.

“We weren’t in My Lai to kill human beings really. We were there to kill ideology, that is carried by — I don’t know. Pawns, Blobs. Pieces of flesh. And I wasn’t in My Lai to destroy intelligent men,” lê read. “I was there to destroy an intangible idea. To destroy communism. I looked at communism as a Southerner looks at a negro, supposedly. It’s evil. It’s bad.”

Nguyen said this dehumanization of both Black and Asian bodies has made her reflect on the various diasporic experiences represented at the event, and how legacies of racism expand the conversation on what “Black is” and “Black ain’t.”

“A Vietnamese person in Vietnam would not identify as Black, but this kind of concept of Black as the stigmatized, the oppressed under the weight of imperialism and colonialism,” Nguyen said. ”Black isn’t just a skin color, but it’s also kind of a condition of the oppressed.”