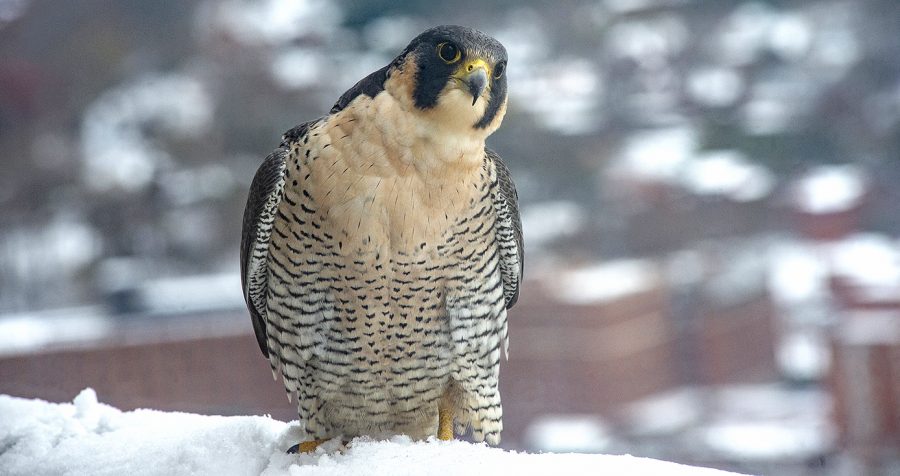 Image courtesy of the University of Pittsburgh

A multitude of peregrine falcons have called Pitt’s Cathedral of Learning home since 2001 and they have been livestreamed since about 2007. Morela, distinguished by her peachy breast and face coloring, laid four eggs with Ecco, the first being born on St. Patrick’s Day, and the last being born on March 24.

A multitude of peregrine falcons have called Pitt’s Cathedral of Learning home since 2001 and they have been live streamed since about 2007. While many of the falcons are revered by the Pitt community, even after their deaths, one falcon has been unforgettable — and not for a good reason.

“We were shocked, and Hope had nested at the Tarentum Bridge, but it was a place without a camera. Some years she didn’t have any young, some years the most she ever had was two,” St. John said. “I began to think, you know maybe this was going on the whole time with her life, but we didn’t know because we couldn’t see her.”

Recently, St. John has mostly been blogging about Morela — distinguished by her peachy breast and face coloring — who arrived at the Cathedral in 2019 after competing with Hope for the nest. Morela laid four eggs with Ecco — her mate — the first being born on St. Patrick’s Day, and the last being born on March 24. While the hatch date is unknown, St. John said she estimates that the eggs will hatch between April 24 and 26, although many think the eggs may hatch earlier.

The Pennsylvania Game Commission asked St. John to monitor the peregrines, their egg laying, incubation and egg hatch date, but St. John said she couldn’t get a good look at the nest. Because of her inability to see the nest and eggs, St. John used her background in information technology at WQED to set up a camera at the nest.

St. John started her blog, Outside my Window, in 2007, and has written about 1,000 peregrine falcon posts and about 5,000 total posts. Her blog consists of peregrine falcon updates, falcon FAQs and falcon facts as well as posts about other bird species.

Pete Bell, a chemistry professor, said while getting his graduate degree at Pitt, he became interested in the peregrine falcons after watching the livestream. He said in about 2010, he went to Schenley Plaza to watch the chicks fly from the nest and subsequently met St. John.

Bell said he was encouraged to start the @PittPeregrine social media pages — Twitter, Instagram and Facebook — because of his love for teaching and the ability to teach others something they are passionate about.

“Actually using all the tools and driving public interest to actually know that it’s really great to have these birds around, they’re really cool,” Bell said. “I think if you enjoy something, it’s those things that are fun to share with others. That’s why I teach chemistry, because I like it, so I like to share it with others.”

Additionally, Bell said many people try to “gatekeep” the peregrine falcons by using scientific jargon, such as calling chicks “eyasses.” Bell said because of his experience teaching primarily lower-level classes, such as general chemistry, he wanted to make information about the peregrine falcons more accessible and understandable to the general public.

“It’s better to have more people interested in peregrines as a recovering endangered species than it is to be so prescriptivist about the language that’s being used,” Bell said. “I think that might have been another little needle in my side, to try and make something that was fun for people.”

Karen Billingsley, director of administration in the Honors College, has worked in the Cathedral of Learning for the past 38 years. She said her office on the 36th floor is right below the peregrine falcon nest and allows her to watch the peregrine falcons from her desk.

“I can tell you, there was nothing left except feet, a little skeleton, a beak — I mean he cleaned that bird up, let me tell you,” Billingsley said. “That was a little up-close and more personal than I would like to get with them, but they are very interesting.”

St. John said Pitt has been “very welcoming” in allowing the peregrines to nest at the Cathedral, and allowing St. John and the Pennsylvania Game Commission to monitor the birds.

“Pitt has been very, very welcoming and very — maintenance has been very good about the peregrines, watching out for them, making sure that everything’s cool, so it’s been really good,” St. John said. “We call them peregrine falcon landlords.”

Billingsley said she “most admired” Dorothy because of how protective she was of her chicks, especially when the Pennsylvania Game Commission came to put bands on her chicks. Dorothy was the first peregrine falcon to nest at the Cathedral of Learning, and according to St. John, Dorothy had 43 fledglings and lived for about 17 years — a very old age for a peregrine falcon.

According to St. John, the banding occurs almost every summer and must take place within a certain time frame — after the chicks’ ankles stop growing, but before the chicks’ flight feathers grow in. Peregrine falcons are banded to track their age and place of birth, and according to St. John, some of Dorothy’s offspring have been found in downtown Pittsburgh, Ohio, Michigan, Ontario and New York state.

Banding began when peregrine falcons were placed on the endangered species list in 1972, when populations declined after increased use of DDT, which caused falcons’ egg shells to weaken and thin.

After being reintroduced in the eastern United States and populations began to steadily increase, peregrine falcons were taken off the federal endangered list in 1999, and were recently removed from Pennsylvania’s endangered species list in 2019.

St. John said by monitoring the peregrine falcons’ health and behavior, people can learn about how environmental changes may affect them.

“Monitoring the well-being of wildlife, tells us something about, have we overdone it,” St. John said. “Have we, are we, slowly poisoning ourselves? And that’s been, the environmental movements started actually with people realizing we’re poisoning ourselves by looking at other things that were dying first.”

A previous version of this story said Hope nested on the Trenton Bridge. Hope nested at the Tarentum Bridge. The article has been updated to reflect this change. The Pitt News regrets this error.