Panthers shock No. 3 Minnesota in thrilling comeback, will face Washington in regional finals on Monday 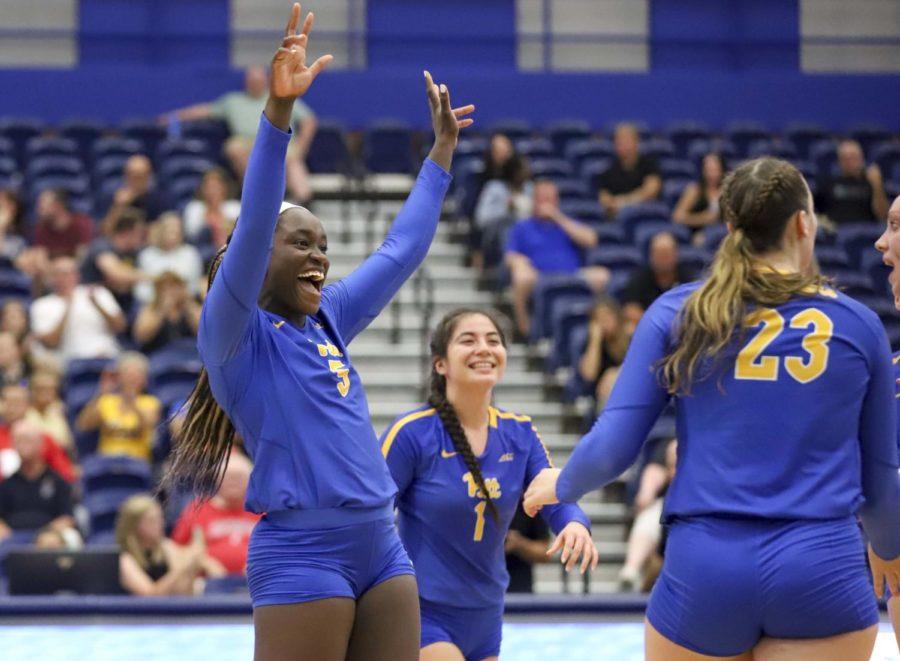 Pitt volleyball made history on Thursday, sweeping No. 14 Utah to advance to its first NCAA Tournament Sweet 16 in program history. Good for the Panthers — they finally overcame their toughest stage. But there stood no chance the team would go any further — for it now had to face the No. 3 team in the country. The run had to end there. Right?

Wrong. Pitt (18-4) shocked the entire sport on Sunday, outlasting Minnesota (16-3) in a five-set thriller 21-25, 25-23, 20-25, 25-21, 15-11. The result may have come as a surprise to volleyball fans across the country, but the Panthers have gotten used to overcoming expectations the past couple months. After an underwhelming fall slate, head coach Dan Fisher said the Panthers felt they might need to go undefeated in the spring to even have a chance at making the NCAA Tournament.

The team did just that, winning its last 12 regular-season matches to earn an unseeded at-large bid in the Big Dance. And now, after their upset of the Gophers, the Panthers find themselves in the Elite Eight in Omaha, Nebraska, on Monday, with their eyes set on the national title.

“It’s kind of beautiful how it’s all unfolded,” Fisher said. “We weren’t that far off from maybe not even being here, and here we are with a chance to be in the Final Four.”

Minnesota appeared how its ranking signified early, looking powerful of an opponent for the Panthers. A service error stopped a 6-0 first-set run from the Gophers, but the Panthers could never claw all the way back, and Minnesota took the first game 25-21.

The primary issue for Pitt — attacking. A few days after Fisher described Thursday’s win as an “out-offensing,” the Panthers couldn’t get anything going on that end in the first set. The team posted an abysmal .077 hitting percentage in the opening frame, and the Gophers held two-time ACC Player of the Year Kayla Lund to a -.091 rate.

The second set featured a completely different tale. The Panthers started off with the lead, and kept it for nearly the whole set thanks to a .310 team hitting percentage and eight kills from Lund. Minnesota climbed back and tied the set at 23, but ensuing kills from junior outside hitter Jordan Lockwood and Lund gave the Panthers the game and tied the match at one.

No Big Ten team had dropped a set during this NCAA Tournament until that point. Fisher said it gave the team the confidence that it could compete with the Gophers, who hadn’t dropped a set in nearly a month.

“Once we got into the flow of the game, it became pretty clear to our players that hey, we’re going toe-to-toe with these guys,” he said.

Good starts made the difference each and every set of the night. Minnesota won the first five points of the fourth frame, before the Panthers tied it up 8-8. Senior outside hitter Stephanie Samedy willed the Gophers with an efficient attack, taking the fourth set and a 2-1 match lead.

For the first time of the tournament, Pitt had its back to the wall. Needing to win the final two sets to save its season, senior captain Chinaza Ndee said the Panthers knew they had to take their play to another level.

“We kind of just looked at each other and said, ‘This is it,’” she said. “We can’t leave anything on the court. We have to go for it, we have to go hard, we have to swing hard. We can’t be tentative, because that’s not how we win games, that’s just not who we are.”

With the match tied 2-2, Pitt needed to win 15 points to advance to the first Elite Eight in program history. Two kills from Ndee gave Pitt a 2-1 advantage, but both teams continued to trade punches, with neither team able to win on its own serve. Two kills from Nwokolo, though, set up a run that would give Pitt a seemingly huge 9-6 lead.

“I thought we kind of got a little bit of a surprise performance out of Chiamaka [Nwokolo],” Fisher said. “I think she was just totally unstoppable. We kind of decided to run some back-ones, a play that we don’t do very often because we thought you’d be wide open and it turned out to be right. They had no answer for it.”

The Panthers seemed to have won the next point to gain a 10-6 lead, but officials had blown the whistle near the end of the rally, forcing the teams to replay the point after a long delay. Senior outside hitter Zoi Faki served an ace on the next play regardless, putting the Panthers up four.

“We were honestly ready for anything,” Ndee said. “There were challenges and timeouts where we were ready for them to reverse the call, ready for them to call something bad or something weird to happen. I think we all just looked at each other and were like, ‘We just need to dial in no matter what happens.’”

Minnesota chipped away at the lead with a block and a kill to pull within two. But with the Panthers up 13-11, Nwokolo came in once again with two consecutive kills to send the Gophers back to Minnesota. Ndee and her teammates stormed off the bench to celebrate yet another monumental milestone for the program.

“We know how much work we put in,” she said. “But it’s one thing to know that and it’s another to see it come to fruition, so I was just so proud of us and so thankful that these girls are in my life.”

Like the rest of their tournament matchups, junior middle blocker Sabrina Starks’ Nebraskan ties provided a huge boost to the Panthers. The team has filled its allotted ticket capacity with Starks’ fanbase every tournament game so far, and Lund said the team even had an opportunity to purchase more seats on Sunday than the first two games. When asked by team members if she could get more people in the stands, Starks had no doubt.

If you wanted to get into CHI Health Center Omaha last week for the start of the NCAA volleyball tournament, it would've helped to know Sabrina Starks.

The Platteview grad helped Pitt upset Utah in the second round. #Huskers

“It was awesome,” Lund said. “I think it made a really big difference for us today because we had both of our little sections filled to the capacity whereas Minnesota didn’t. Our fanbase, our stands were really loud and cheering all the time and up and active, so it was definitely helpful.”

Washington beat Louisville later on Sunday evening in a wild comeback, meaning the Huskies will face Pitt in the Elite Eight on Monday at noon. Unlike the past few games at the smaller, intimate “Convention Center” gym of the Chi Health Center Omaha, the Panthers will get a chance to play in the stadium complex the rest of the way.

“We’re kind of excited that we’ve made it out of the Convention Center,” Fisher said. “We get to play with a proper arena with fans who are buying tickets.”