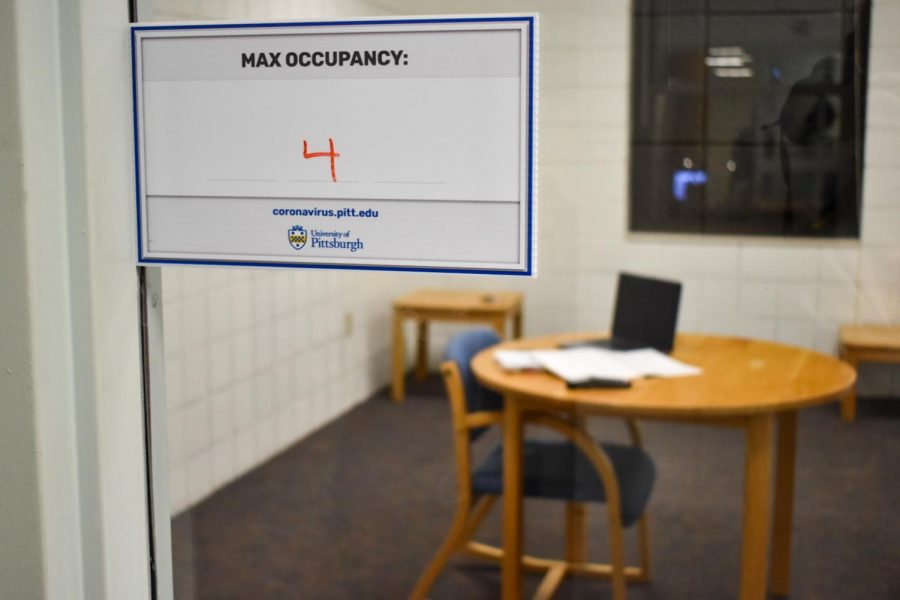 Pitt enacted shelter-in-place guidelines on March 31 in response to a spike in COVID-19 cases among students, which included the closure of study spaces in residence halls and lounges and decreased library operating hours.

For Isaac Przybysz, online classes and the COVID-19 pandemic have challenged his mental health. Because of this, he said Pitt should leave study spaces in residence halls open to help students during finals.

“A lot of our students are struggling right now and I just hope they know that we’re struggling and people’s mental health is dipping,” Przybysz, a sophomore business major, said. “And with finals coming up the least they can do is give us a space to study that is convenient.”

Pitt enacted new shelter-in-place guidelines on March 31 due to a rise in student COVID-19 cases, particularly in on-campus residence halls. After these new protocols — which called for closing study spaces and lounges in several residence halls and limiting hours of operation for libraries — students took to Nordenberg and Towers residence halls to plaster flyers in protest of the closed study spaces.

The CMRO updated shelter-in-place guidelines on April 6 to allow for the opening of select study spaces and lounges in residence halls. But these guidelines have been changing frequently, with Tower C closing its study spaces last Wednesday, according to an email from the University.

Pitt spokesperson Kevin Zwick said the University closed the study spaces because of the increased rate of transmission in residence halls.

“At this time, we are seeing a higher rate of transmission in residence halls than we have at any point this year,” Zwick said. “These measures were taken to limit the interactions among residence hall students to the greatest extent possible.”

Some student complaints included questioning why studying in public spaces with more people around is allowed in libraries, but studying in small residence areas with few people — while socially distancing with masks — is not permitted.

Przybysz, a Ruskin Hall resident, said the guidelines seemed inconsistent when some larger spaces are open, such as libraries and classrooms, but the smaller, lesser-used residence hall study spaces are closed.

“They’re just inconveniencing people and taking away study opportunities because if we can safely study in a huge library with tons of people around, we should be able to study from our building in the lounges where we are still distanced and there is only one other person around,” Przybysz said.

In the aftermath of the posted complaints, Abigail Rossman, the resident director of Nordenberg Hall, said in an April 2 email that she is unsure why students aren’t allowed to use the study rooms in the residence halls and directed the residents to send their complaints to the COVID-19 Medical Response Office.

“I am not qualified to make the decisions of what closes when and what can stay open nor do I have the reasoning for you as to why you can use public spaces and not the study room down the hall,” Rossman said. “I have voiced your concerns to administrators I am connected with, but I also want your voices to be heard to those making decisions that are impacting you.”

The current residence halls with open study spaces include:

The current residence halls with closed study spaces include:

Victoria Beck, a sophomore economics major living in Brackenridge Hall, said the “inconsistent” and “continuously changing” guidelines from the University is confusing for students.

“The thing that gets on my nerves is just the inconsistency of going into Guarded Risk and then two weeks later we change back to Elevated Risk,” Beck said. “It just seems like the University sends inconsistent messages to students about the level of risk on campus and what we need to be doing.”

Beck said the University should have better planned for the rise in cases after St. Patrick’s Day parties, and the change in risk postures from Elevated to Guarded Risk made it unclear to students what rules they should follow.
“I think that they could have anticipated a rise in cases with St. Patrick’s Day because the exact same thing happened at Halloween,” Beck said. “So just the back and forth in terms of policies makes parties on St. Patrick’s Day more likely to happen and if they would just stick to one set of clear policies instead of sending us so many emails on a daily basis about changes, I think we would be much safer on campus.”

Zwick said Pitt will lift the shelter-in-place policies that affect the opening of study spaces when cases go down and rate of transmission is lower. Students are encouraged to get tested if they think they have possibly been exposed.

“Shelter-in-place will lift when the CMRO determines it is safe to do so based on reduced volume of transmission on campus, and the University highly encourages students to get tested in order to determine the number of cases and mitigate the potential spread of the virus,” Zwick said.

Przybysz said he has never been against social distancing or following guidelines, but the inconsistencies shown by the University made him feel disrespected and not cared for as a student.

“I have followed all the shelter-in-place guidelines the University has outlined, and I am someone who believes in following the safety protocols, but there’s a point where it gets to be too much, and I think study lounges are kind of that point,” Przybysz said.