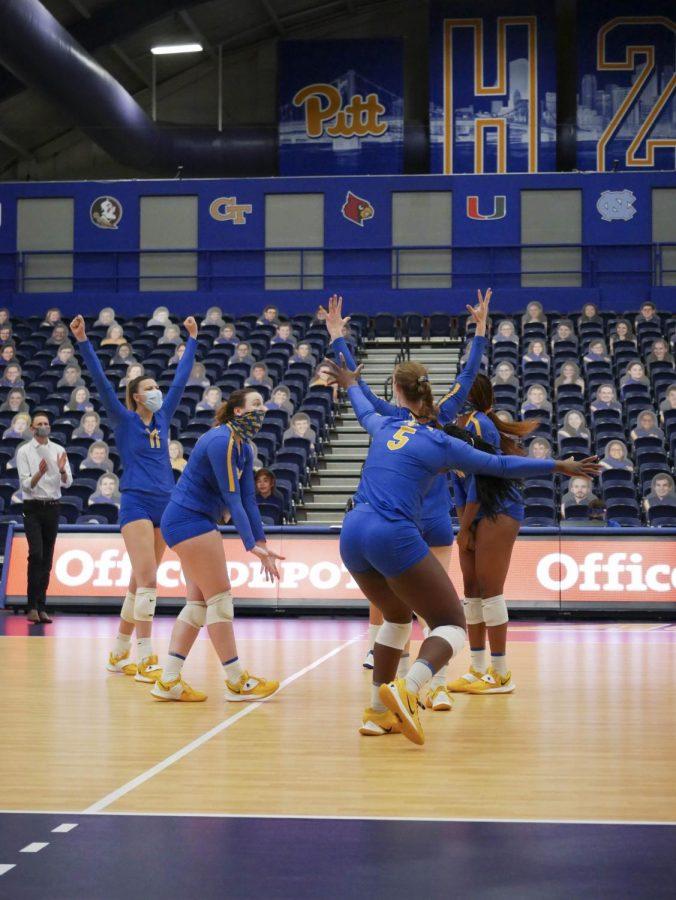 Pitt volleyball’s historic NCAA tournament run came to an end on Monday afternoon, and it happened in possibly the most heartbreaking way imaginable.

Pitt volleyball’s historic NCAA tournament run came to an end on Monday afternoon, and it happened in possibly the most heartbreaking way imaginable. After winning the first two sets of the match, the Panthers (19-5) lost the next three games, falling to No. 6 Washington (20-3) in the team’s first-ever Elite Eight appearance.

Pitt entered Monday’s match riding an upset streak in postseason play. After an undefeated spring portion of the regular season, unseeded Pitt beat its first three NCAA tournament opponents — LIU, No. 14 Utah and No. 3 Minnesota. The sweep of Utah marked Pitt’s first win in the second round of the tournament in program history, and the team followed that up with a shocking five-set comeback against the third-ranked Gophers.

After becoming one of two unseeded (not in the top 16) teams to make the Sweet 16, no team outside of the top eight seeds qualified for the quarterfinals except for Pitt. But the Panthers didn’t come in looking like underdogs, storming out to a 10-5 lead in the first game. Washington couldn’t get within two points for the rest of the game, falling 25-20.

“I thought they came out a little flat and we jumped on them,” Pitt head coach Dan Fisher said.

The Panthers carried the momentum straight into the second frame, jumping out to an 8-4 lead. Although the Huskies successfully evened it at eight, Pitt went on a crucial run during redshirt senior setter Kylee Levers’ serve to take a 15-10 advantage. The Panthers would hold on to win the second game 25-21, thanks in large part to sophomore middle blocker Chiamaka Nwokolo’s five kills.

With a 2-0 lead, full momentum and what looked like an unstoppable defensive rhythm, Pitt stood on the brink of an unpredictable Final Four appearance. But anyone who declared the game over must not have watched the Huskies for the past week. They by no means coasted to this stage, going five sets in its first two matches of the tournament.

Against Louisville on Sunday, Washington looked unrecoverable multiple times. The team went down 2-1, before dominating the fourth game to force one more. Down by six points in the final set, the Huskies mounted a powerful comeback to send the Cardinals home.

“I think it just shows how gritty this team is,” Washington junior setter Ella May Powell said. “It’s just really fun to see people show up in those moments.”

The Huskies dominated the third set against the Panthers from start to finish, cruising to a 25-16 result. The Panthers only hit a .148 hitting percentage in the frame, while Washington shined with .522.

“We were kind of just waiting for them to lose it,” Fisher said. “We kind of went away a little bit from what got us here, just playing really aggressive volleyball.”

Washington got out to another strong start in the fourth game, taking a 10-6 lead. Any time Pitt would start to claw back, the Huskies seemingly got a timely boost from junior outside hitter Claire Hoffman and senior outside hitter Samantha Drechsel. But the set became truly dramatic when the referees received more scrutiny.

With the Panthers trailing 19-15, play stopped when Pitt players sought an over-the-net violation on the Huskies. Instead, officials called a violation on Pitt for touching the net. Fortunately for Fisher, he could challenge the call because a Washington player had made contact with the ball when going over the net. Pitt won the challenge, resulting in a two-point swing on the scoreboard.

A couple of points later, Washington took an opportunity to use a challenge, saying an errant ball had tipped off of Starks’ fingers. That attempt proved unsuccessful, cutting the lead to two, and a couple plays later the Panthers evened the set 20-20 with an ace from senior outside hitter Kayla Lund.
It only took a matter of minutes for the challenge card to come out again, this time Fisher arguing a serve from senior right side hitter Chinaza Ndee had painted the line. He lost that one, tying the set at 23. Washington successfully overturned another call on the next play, giving the Huskies set point. Nwokolo responded with a kill to tie it 24-24.

During this crucial moment of the match, a Pitt rejection appeared to set up a match point. Washington challenged and officials ruled that Lund had made contact with the net earlier in the rally, setting up a game point for the Huskies instead. They capitalized, putting it away to tie the match two sets apiece.

“We had some gritty performances, but I don’t think anybody really had the game of their lives,” Fisher said. “We had a lot of good, but it just wasn’t quite enough. It would’ve been nice to get one of those to go our way in the fourth, though.”

Suddenly, Pitt needed to win the final set or its season would end. The Huskies carried the momentum of their comeback, though, and won six of the first seven points before an Ndee kill halted the run. Panther junior outside hitter Jordan Lockwood got rejected at the net, and Drechsel notched an ace immediately after to give Washington a 10-4 lead.

The deficit proved too much to overcome. The teams went back and forth, with Starks stepping up to serve, needing five consecutive points for the Panthers. The serve didn’t make it over the net, and the Huskies stormed the court to celebrate their first Final Four appearance since 2013.

An emotional Ndee reflected after the game on the team’s historic run, the farthest Pitt volleyball has ever made it in the NCAA tournament. She said the sweep over Utah in the second round would live as the defining moment for her.

“I believe in us,” Ndee said. “It’s just about showing the people we’ve always been [legit], and I think that’s what we did in this tournament. I’m just really really proud. It can be easy to kind of buy into the idea of us not being as good as we think we are or say we are. Showing up in this tournament really planted a seed in our team that ‘hey, we can compete with anybody.”

Fisher said he hoped the loss would serve as a motivator to the program in the future, building off of the success it had this season.

“People have known that we’re a good team for the last few years, but hopefully there’s more perception that hey, we’re a contender,” he said. “We’re someone that can make a deep run and can fight for a championship. Hopefully that affects everything positively — our recruiting, our fanbase. That’s the hope.”