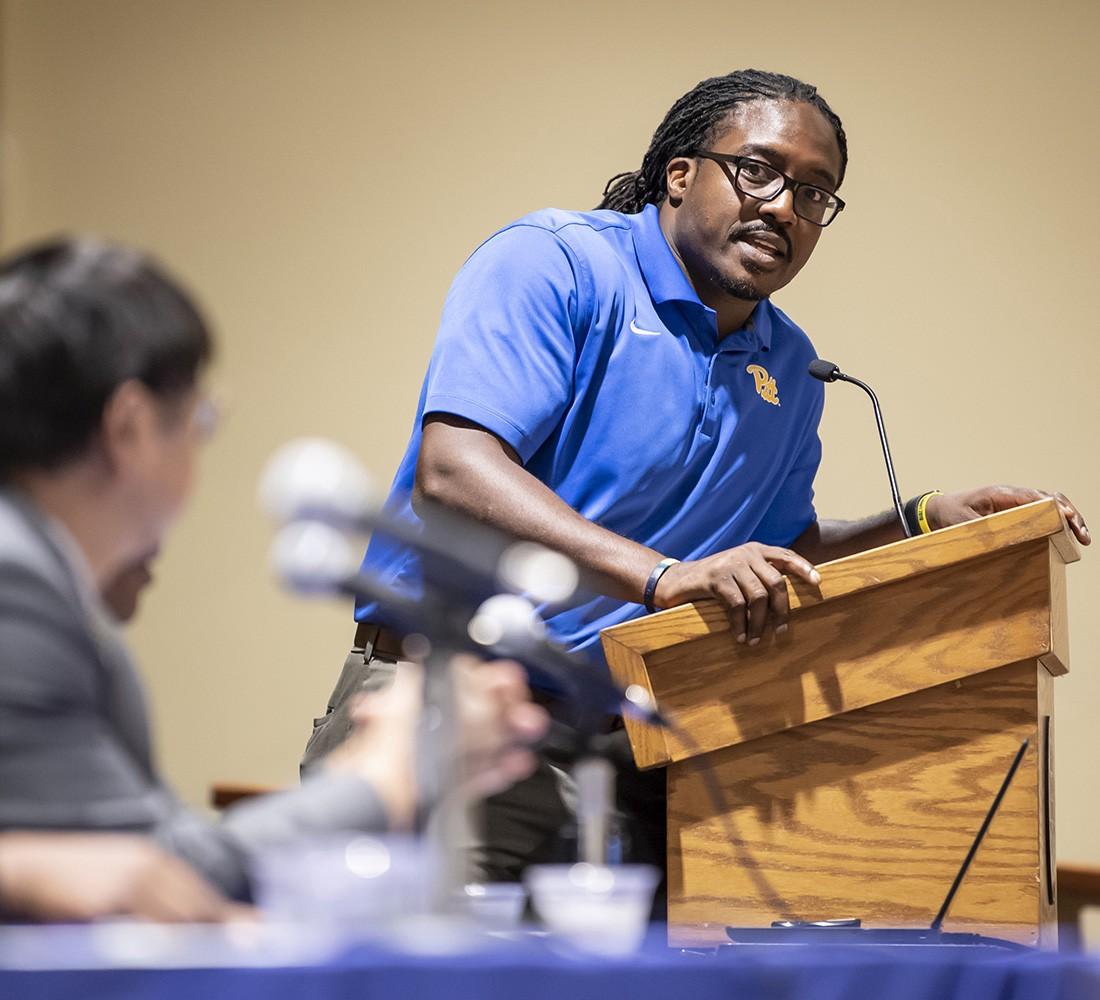 Ron Idoko: Lifting up those around him

Idoko played for the Panthers at defensive tackle from 2002-05, walking on in his first semester at Pitt and eventually earning an athletic scholarship.

“I really understood the value of teamwork and dedication … as a walk-on, you really have to scrap,” Idoko said. “You know you’ve gotta grind a lot to get results.”

Idoko obtained both his bachelor’s and master’s degrees from Pitt, graduating with a degree in communication in 2005, before earning a master’s in public administration, regional and urban affairs two years later.

Idoko emphasized the importance of work ethic frequently, as did Penny Semaia, his former teammate turned professional colleague. Semaia, Pitt’s senior associate athletic director for student life, knows how hard Idoko works firsthand, both in their work with the University and as workout partners.

“[Idoko’s] going to work and fight for what he believes in, and he’s going to lift up anyone who’s willing to be in the fight [along with him],” Semaia said.

Idoko now serves as the diversity and multicultural program manager for Pitt’s Office for Equity, Diversity and Inclusion. He works to increase awareness of and accommodate the issues faced by marginalized groups and cultures.

“There are systemic challenges facing various social identity groups that experience marginalization, whether it’s based on race, sexual orientation, gender identity or ability status, that we need to be conscious of to best engage across our differences,” Idoko said. “We endeavor to build awareness and understanding of the ways in which we are different, working to elevate different cultural experiences and perspectives.”

Idoko said he doesn’t want to force compliance — he aims to advance these narratives in a constructive, organic way.
“We don’t want to mandate everyone to participate in [EDI] programs … the goal is to continue fostering an environment where everyone values and embraces the opportunity to participate in these programs,” Idoko said.

Semaia said Idoko knows how to get everyone on board, even if they aren’t comfortable with his discussions at first.

“[Idoko] creates an environment where you can freely ask questions, whether it’s on biases or experiences, or areas where you just have questions that you haven’t been exposed to,” Semaia said. “He isn’t afraid to be in spaces where there will be discomfort, especially when it comes to [topics of] equity, diversity and inclusion.”

To get everyone on board, networking plays a huge part in Idoko’s EDI work. Idoko said the office partners with different organizations in the community, such as Pittsburgh Action Against Rape, working with them to create opportunities for EDI-related programs.

Holly Hickling, the associate program evaluation specialist for Pitt’s School of Pharmacy, said she’s worked with Idoko since she joined the University in 2014.

“When I met him, I could tell that he was a rising star,” Hickling said. “I see Ron as a visionary leader.”

Hickling sees Idoko’s ability to reach out across campus organizations as one of his biggest strengths.

It all circles back to teamwork for the football-minded Idoko.

“Many hands make for lighter work,” Idoko said. “Fostering an equitable, diverse and inclusive University community can’t be the work of just one office alone.”

Idoko said his EDI work is similar to the position he used to play — a lot of hard work, often without much fanfare. He doesn’t mind working in the background because he’s used to it.

“It’s not about seeking praise or recognition for what we do — it’s about results, about really moving the needle forward,” Idoko said.

Even so, Idoko said that with hard work, there’s always a chance for upward mobility.

His example? Another former Pitt defensive tackle. Aaron Donald, who bartered his play in the trenches into three NFL Defensive Player of the Year awards, recording 85.5 sacks at a position not known for rushing the quarterback.

“The grind, the commitment and the hard work actually get you to a position where work is noted,” Idoko said. “We understand the value of being deeply engaged in the community, being active and finding every opportunity to advance our collective DEI agenda.”

With a focus on outreach, teamwork and collaboration, the ability to adapt is crucial to what Idoko does. Even among the challenges brought on by the COVID-19 pandemic, the switch to online life created new opportunities to advance EDI work.

The office hosts an annual forum on diversity, opening the door for members of the Pitt community to learn about diversity and inclusion concepts. Idoko said this occurred after the University switched to a remote posture, and so the conference moved online as well.

He said the office’s previous best showing consisted of 350 participants, but the accessibility afforded by an online event meant it could reach more than 13,000 people during the three-day conference.

“It was a very distinct moment for us, something we’re certainly very proud of,” Idoko said.

Idoko’s latest work in the online world is a seven-part workshop open to all members of the Pitt community called “Developing Diversity Consciousness to Foster Antiracist Practices, Cultures and Communities.”

“It’s focused on educating folks on the concept of diversity consciousness, which is the understanding, awareness and skills to think through and value human differences,” Idoko said. “It’s meant to help folks foster open, thoughtful and productive dialogue around one of our core differences — race.”

Idoko wants to educate people on structural racism to better combat it, noting that racism is a far more complex issue than what people might normally think.

Fostering a better understanding of race, bias and discrimination helps people to understand and improve both themselves and their communities, Idoko said. It’s important to him because of the grave consequences bias creates.

The series is designed to educate people on implicit bias and how racial inequality manages to persist and to educate on race through examining different racial identities. With any forum, though, there’s a danger of creating an echo chamber, preaching to a choir of people already open to these concepts and on board with advancing the narrative. Idoko’s goal is to push his platform past that.

“The challenge is trying to reach those who need to hear [my message] the most,” Idoko said.

Idoko said he values every difference he makes, no matter the scope.

“I like to think of every program … every opportunity we have to engage an audience on a topic they haven’t been exposed to as a success,” Idoko said. “I’m happy whether we have an audience of 10 or 1,000.”

That’s not the only project Idoko has in the works. Hickling said he’s working on phone applications that deal with civic engagement.

“Something else I admire about Ron is his entrepreneurial spirit,” Hickling said. “I got to beta test some of his stuff, and it’s pretty exciting.”

Semaia emphasized his admiration for Idoko as well. He graduated two years before Idoko, but he still looks up to his younger friend as a leader.

“I have tremendous respect and appreciation for Ron and his leadership, particularly when it comes to equity, diversity and inclusion,” Semaia said.

Idoko added that anyone who wants to learn more about issues of equity, diversity and inclusion should feel free to reach out to him, and that everybody has a role to play in combating racism — he wants to open the door for them to do so.

“I look forward to us all working together to advance the most welcoming, inclusive and equitable University community possible,” Idoko said.