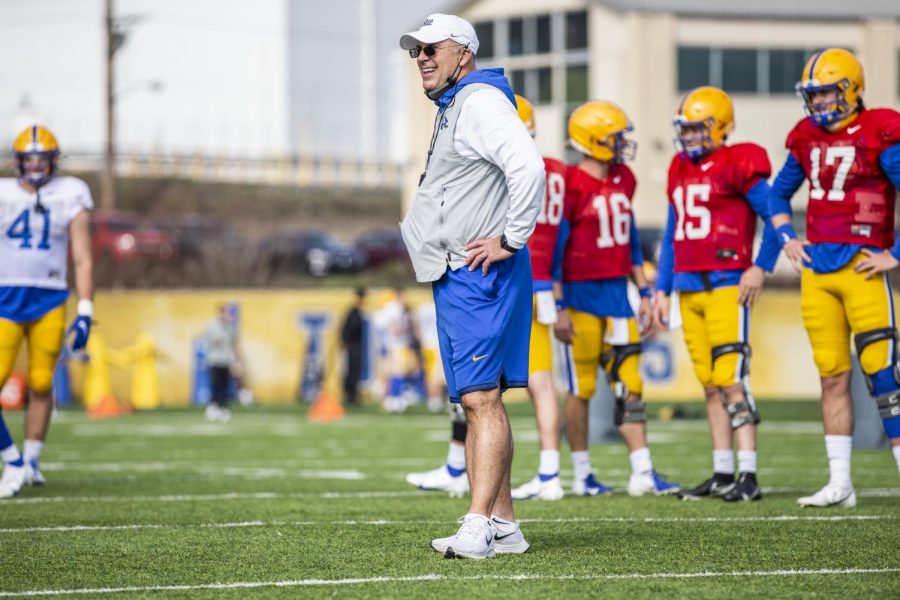 As this semester winds down, the Pitt community looks toward the future.

For Pitt football, that means preparing for the annual Spring Game at Heinz Field this Saturday. In anticipation of the coming exhibition, TPN senior staff writers Dalton Coppola and Kyle Saxon, alongside staff writer Eddie Lasker, give their answers to the most pressing questions facing the Panthers as they conclude spring practices.

Dalton Coppola: Pitt will have senior Kenny Pickett under center for at least one more season, but the question of who will succeed him lingers. Redshirt sophomore Joey Yellen filled in for an injured Pickett in two games last year and his performance was underwhelming, to say the least — it seems Pickett’s heir apparent was not rostered at the time.

Pitt fans can look to early enrollee Nate Yarnell, a three-star recruit out of Texas, as one potential replacement. The Spring Game will give Panther fans an early glimpse of what life after Pickett may hold.

Kyle Saxon: The loss of multiple starters will put an enhanced amount of pressure on the 2021 Panther offensive line. Redshirt senior Owen Drexel appears to be former star Jimmy Morrissey’s successor at center, and junior Jake Kradel is solidified as a starting guard, but the remaining starters are not finalized.

Redshirt senior tackles Carter Warren and Gabe Houy offer experience, but the emergence of sophomore Matt Goncalves makes the battle for the tackle position contentious. With plenty of other options, every Panther offensive lineman will compete not just for the bragging rights in the Spring Game, but also for snaps in 2021.

Eddie Lasker: The Panthers return their most dynamic offensive weapons in Pickett and Jordan Addison. Addison is poised to continue the legacy of dominant Pitt receivers behind Larry Fitzgerald, Devin Street and Tyler Boyd. Pitt fans are counting on Addison to build on that campaign and emerge as a top receiver in the ACC.

His ascension into truly elite status is dependent upon Pickett’s play. Now in his fifth year of eligibility and third year in offensive coordinator Mark Whipple’s offense, Pickett must leave no doubt. Look for Pickett to feed Addison the ball and light up a depleted Pitt defense.

Pitt fans debated the running back position all last year. Who do you think should come in as the primary ball-carrier, and do you think that anyone will change their standing on Saturday?

DC: The Panthers seemed to make it clear that rising junior Vincent Davis was the starting running back after he received the bulk of the carries last year. But redshirt senior A.J. Davis and sophomore Israel Abanikanda will look to challenge Vincent Davis for touches. Abanikanda is a former track star and New York’s former Gatorade player of the year and was a highly ranked recruit, making him the biggest threat to Davis’ playing time.

Panther fans shouldn’t be shocked should Abanikanda take over as the starter before season’s end. But don’t expect much to change after the Spring Game, due to the fact that neither back is getting the privilege of running behind the full, starting offensive line.

KS: There is no question that Vincent Davis currently sits atop the Panthers’ depth chart. While Davis culminated his 2020 season with an electrifying 247-yard performance at Georgia Tech, this stellar showing overshadows a largely underwhelming sophomore campaign.

Although none of Pitt’s running backs managed to be consistently effective in 2020, the coaching staff did not really give anyone other than Davis a true chance.The coming months present an opportunity for the more physically imposing and explosive Abanikanda to carve out a larger role in Pitt’s offense, and perhaps surpass Davis as the starter.

EL: Vincent Davis is Narduzzi’s guy, there’s no doubt about it. A deceptively tough runner, Davis led the Panthers in rushing as well as receiving out of the backfield in 2020. His pass-catching capabilities will make it exceptionally difficult for Whipple to take him off the field.

On the rare occasion he does rest, A.J. Davis will be a rock-solid spell back. Vincent and A.J. Davis should establish themselves at the Spring Game to prevent the carousel that happened last year.

With a stacked draft class this year, the Panthers have some big shoes to fill, especially on the defensive line and in the secondary. How confident are you in the depth of Pitt’s defense, after losing so many key contributors?

Position coach Charlie Partridge has proved in the past two seasons that he can get the most out of his players, and Pitt fans shouldn’t expect anything less with this new wave of prospects — including former Pitt star Aaron Donald’s nephew, incoming first-year Elliot Donald.

KS: The Panthers’ safety tandem of Damar Hamlin and Paris Ford was among the most talented in the nation last season, and with the loss of starting cornerback Jason Pinnock as well, the newcomers in the secondary will have much to prove.

Junior Erick Hallett II and sophomore Brandon Hill showed promise filling in for Hamlin and Ford at the end of the 2020 season, and will likely both take on the role of full-time starter for the first time in 2021. Senior cornerback Damarri Mathis returns from a season-ending injury suffered before the 2020 season, and sophomore transfer M.J. Devonshire will be another talented defensive back to watch.

EL: Athletes like Weaver and Jones are difficult to come by. The Panthers likely won’t replicate last year’s production, but they should still be one of the tougher ACC defenses in 2021. At the Spring Game, expect the defense to struggle early applying pressure. But rising sophomore Calijah Kancey is poised to be the biggest star on the defense this year. He broke out last season with 7.0 TFLs.

Pitt has some promising early enrollees. Who do you expect to turn the most heads at the Spring Game?

DC: With the bulk of the starting defensive line from 2020 departing for the NFL, early enrollee Nahki Johnson will look to be the next great Pitt product. As the seventh-ranked weakside edge rusher in the class of 2021, Johnson earned offers from some of the top schools in the country before committing to Pitt in 2019 — including in-state rival Penn State.

Standing at 6-foot-2 and weighing in at 240 pounds, Johnson doesn’t boast the same size as former Panther edge rushers Jones II and Weaver, but his explosiveness off the line of scrimmage paired with exceptional hand technique sets the early enrollee up to have success at the collegiate level.

KS: Pickett may be the only Pitt quarterback to take a regular season snap in 2021, but all of them should get an opportunity on Saturday. With the backup quarterback situation largely murky, look for Yarnell to open some eyes.

Even though Yarnell is doubtful to earn that spot this year over three upperclassmen, a promising performance in his first Spring Game could do wonders for his and the program’s confidence moving forward.

EL: Early enrollee tight end Gavin Bartholomew is a player to watch for. He had a strong spring camp and could challenge presumptive starter Lucas Krull for playing time. Whipple has underutilized the position group thus far in his three years calling plays. If Bartholomew has an exceptional game Saturday, he could reverse that trend.

The Spring Game is scheduled to kickoff at 1 p.m. on Saturday afternoon from Heinz Field and will be broadcast on the ACC Network.