‘On fire for over a year’: Pitt leaders reflect on pandemic year 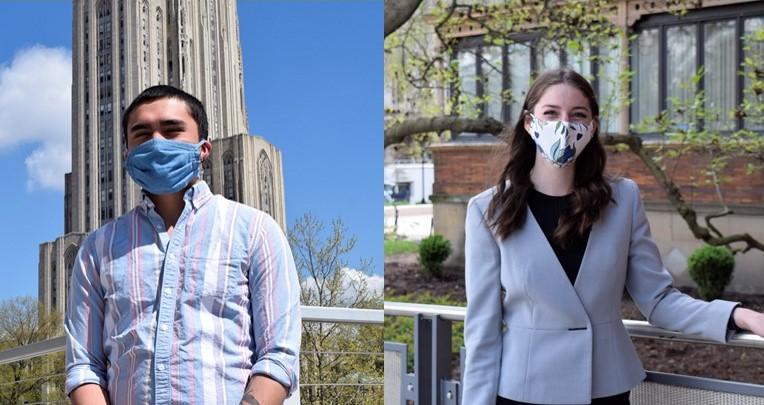 Communicating, planning and adjusting are key traits of successful elected officials. Add on the unprecedented nature of a pandemic, and a leadership role becomes a whole new ball game.

Three elected shared governance leaders at Pitt reflected back on the 2020-21 pandemic year and what it meant to hold a top position during unprecedented times.

Eric Macadangdang, Student Government Board president, said he entered into his role last year with a lot of question marks and was unsure of what the next few months would look like following his inauguration in April. He said his reaction to the circumstances was “an evolution of sorts.”

“It was constant trial and error in a lot of ways in terms of adapting to things. Just basics with meetings and project development and shared governance,” Macadangdang said. “We had to adjust, but sort of on a moment’s notice be able to pull the scales a certain way. It was challenging to say the least.”

Malena Hirsch, Graduate and Professional Student Government executive board president, also entered her role at the start of the pandemic last April. Hirsch said she was “cautiously optimistic” about serving during the unprecedented time, but also worried about participation in a virtual setting.

“I was definitely intimidated. A lot of the things GPSG does is hold in-person events for students, in-person professional development, networking, social events, things to help build community,” Hirsch said. “I was really nervous about how we would be able to do that in a virtual environment. Were people going to be so burnt out that there would be nothing left in the tank?”

Hirsch said she looked forward to serving during a critical moment in history, despite the uncertainty that came with it. She said she wanted to be a guide for her community and help people.

“I think it is important to have strong leaders during years of adversity,” Hirsch said. “I was excited to step into that role and be in a leadership position during such a pivotal year, everything COVID-wise, social justice-wise, politically.”

Hirsch said she quickly realized her peers needed her to be the direct line of communication for information. She said her first meeting showed her the level of understanding she was expected to have as GPSG president.

“I got hit with a ‘posture’ question and what it would mean if we switched to a new posture,” Hirsch said. “Thankfully I had it pulled up on my screen, but I was basically just reading it.  And I was like ‘I need to have a better, deeper understanding beyond just reading the text of what it means.’ I need to be able to pull in from when I talked to the chancellor and the vice provost for graduate studies.”

Even leaders who had years of experience in their role were forced to adapt and shift their perspective during the pandemic. Chris Bonneau, University Senate president, served his third and final year as president during the COVID-19 pandemic. He said the past year has been unlike any prior experience.

“In the normal course of being president, there are things that come up and you deal with them, there is a regular schedule. But, we have been on fire for over a year,” Bonneau said. “Just the sheer number of things to figure out, obligations, figuring out externalities, unintended consequences. The sheer volume of decisions that had to be made in a short period of time. The urgency with which things had to be done. It was exhausting.”

Bonneau said he could have either completely delegated all tasks, or he could have stepped into the role like a full-time job. Bonneau said he chose the latter. In doing so, Bonneau said he was forced to learn about aspects of the University that he never understood prior to the pandemic, such as building access and ventilation. He said he came to understand that everyone has different concerns and compromise is essential.

“I have had to learn a lot in order to participate meaningfully in conversations. It has taken a lot of time and thought and it was something I didn’t fully appreciate beforehand,” Bonneau said. “We all have different things we are focused on. How can we accomplish what we need to in a way that works for both of us? Well, that’s not always going to happen.”

Being in a leadership role during a pandemic comes with constant challenges and forces one to grow in unexpected ways, the leaders said. Macadangdang said this past year has taught him to be “an advocate through listening.” He said he works to be as informed as possible before he speaks on issues, an especially useful skill during a year of constant change.

“I am always of the side that you should listen first and hear people before you speak. I try my hardest to read the articles, talk to the stakeholders, get a firm grasp of the bigger picture before I step in,” Macadangdang said. “Restraint is a valuable asset that I have learned to gain.”

Hirsch said her biggest challenge was figuring out how to build relationships and establish trust with her peers across a screen. She said virtual meetings inhibited their community-building and made the process extensive and awkward.

“Trust in your groups leads to putting out better work. You are more comfortable and are able to challenge each other more. Sometimes over Zoom I think we couldn’t get there,” Hirsch said. “I feel great about everyone on my board now, we have built really strong relationships. It just took longer.”

Despite the difficult year, these leaders still remember the highlights and positive moments. For Bonneau, he said the past year showed him the resilience of the students and faculty and their ability to follow guidelines and adjust when needed.

“A lot of faculty have gone the extra mile in their classes to adapt and present the high-quality learning experience,” Bonneau said. “And, generally speaking, the measures we put in have seemed to work. We were also kind of building the plane as we were flying it. There was no real precedence for this.”

Hirsch said serving as GPSG President has been life-changing and has helped shape her as a person. She said the role showed her many perspectives outside her own and put her in a constant state of learning.

“I feel very honored and privileged to be in this role. I got to meet so many different people that I would likely have never had the opportunity to meet,” Hirsch said. “I am now much more aware of my privilege, much more aware of everything going on in the world. It has been huge for me on a personal level.”

Macadangdang said one of his stand-out moments from the year was being able to take safety walks around Oakland with Kenyon Bonner, the vice provost and dean of students. He said those walks “instilled those good behaviors in his peers,” but also allowed him a rare opportunity to connect with the community face-to-face.

“It was one of the very few things I got to do in-person this year,” Macadangdang said. “Being able to walk up and down the streets of Oakland, being able to interact again and see people where they were. Saying to people ‘hey, I’m the president of SGB’ and then we strike up small conversations. Being able to make more personal connections with people will certainly go down as a highlight for myself.”

Now that the year is drawing to a close, these leaders are preparing to step down and hand off their positions. As for what is next, Macadangdang said he plans on taking a much-needed break, and he suggests others do the same.

“I think it makes a fool out of a leader to try to puff up their chest and say ‘I’m better than this.’ I won’t lie, I have struggled alongside everyone else,” Macadangdang said. “I am going to do what I encourage everyone else to do: take that break to regroup and reassess yourself.”