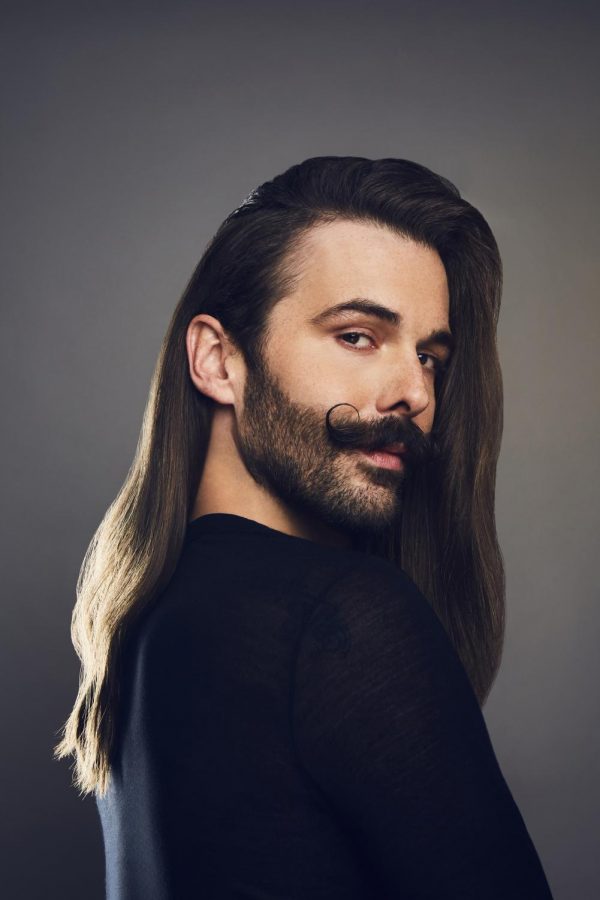 While Jonathan Van Ness is best known for his makeover skills and radiant personality on the show “Queer Eye,” he’s also an aspiring figure-skater in training. For Van Ness, acquiring this new skill hasn’t come without a struggle.

“Well, skating has not been easy,” Van Ness said. “It’s so much scarier than I thought — you’re definitely like 4 inches off the ground, moving really fast, and my hips have seen and felt some things that I didn’t know I could feel.”

Van Ness discussed his ice skating experience and more on Monday night, when he participated in “A Conversation with Jonathan Van Ness,” a lecture held by Pitt Program Council in collaboration with Rainbow Alliance. The organizations hosted the event as a part of Campus Pride Month, which colleges celebrate in April rather than the national Pride Month in June, and it was PPC’s last lecture event of the year.

Students had the opportunity to pre-submit questions for the event via Instagram DMs as well as submitting questions during the event while it was happening. Quincey Johnston, PPC’s lecture director, and Barrie Wiener, president of Rainbow Alliance, co-moderated the event.

He also addressed the impact of reality TV show “Queer Eye,” Netflix’s revamp of the 2003 series “Queer Eye for The Straight Guy,” in which Van Ness stars as one of the Fab Five. Along with his four other co-stars — including Antoni Porowski, who visited Pitt in 2018 — Van Ness meets individuals around the United States and attempts to change their lives for the better.

Van Ness discussed his passion for activism within the LGBTQ+ community throughout the event. Van Ness, who identifies as gay and nonbinary, said Pitt students must get out and vote in significant states like Pennsylvania to be an ally to the community.

“Vote — your state is pivotal,” Van Ness said. “There are 38 state legislators who are trying to enact transphobic legislation right now, we still don’t have enough access to the HIV social safety net, and there’s so much more work to do.”

Along with voting, Van Ness said students should explain systemic issues such as transphobia and homophobia to their families in order to increase awareness of the harm those things do to the LBGTQ+ community.

“Explaining to your families the existence of white supremacy, racism, homophobia, transphobia and the many ways that those things continue to kill our fellow people is really important.” Van Ness said.

Additionally, Johnston asked Van Ness how he feels about the use of the word “queer.” For Van Ness, the word isn’t inherently derogatory at all.

According to Van Ness, he and his co-stars on “Queer Eye” wanted to make sure that the reboot was on par with the original series.

“I think I hoped that we would do the original justice, and I wanted people to like our show,” Van Ness said. “I think it’s fair to say that I felt pressure, but it wasn’t really from any one person — I just think that all of us really wanted to do a good job with the opportunity.”

According to Van Ness, he’s excited that he’s had the opportunity to work with Netflix, and he’s looking forward to filming the next season in the upcoming days.

Even though the show has been popular since 2018, Van Ness said he is still processing the fact that he’s a celebrity.

Along with discussing his career with “Queer Eye,” Van Ness also gave some self-care tips to Pitt students to take the stress out of upcoming finals.

According to Wiener, a French and politics and philosophy major, Rainbow Alliance helped PPC write questions for the event. Wiener said moderating the event was a helpful learning exercise for the future lectures that Rainbow Alliance is planning.

“It’s really nice to partner with an organization like PPC, because they have a lot of funding and resources so they can do some really cool things,” Wiener said. “It’s also really helpful since we’re trying to run a lecture later in the year, so it’s nice to see how to interact with big celebrity guests.”

According to Nicholas Jones, a junior majoring in media and communications and the public relations director for PPC, it made sense to partner with Rainbow Alliance for this event to celebrate Pride Month.

“We’re really excited to be partnering with Rainbow Alliance for this event,” Jones said. “As a part of Pride Month, we think it is really important to highlight the community in a positive way and we thought that this partnership just made sense.”

Throughout “Queer Eye,” Van Ness has met people from all across the country who are all in their own diverse situations. In his experience with the show, Van Ness said he’s learned a universal truth about all of the people he’s met.