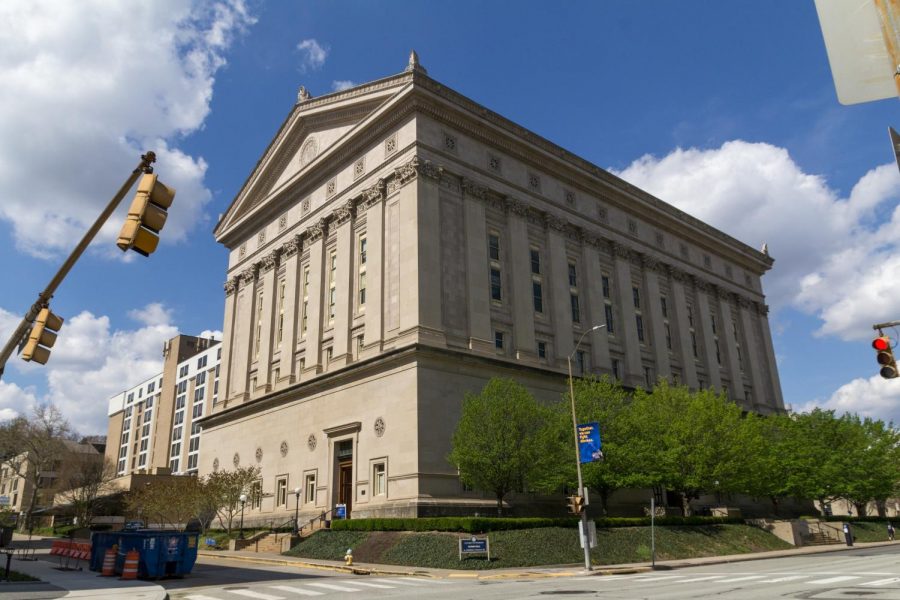 The Office of Admissions and Financial Aid is located in Alumni Hall on Fifth Avenue.

When Parker Jack received an email last month notifying him that he could take an in-person tour at Pitt, he left class to go to the bathroom and schedule one immediately.

“I had already committed before I even visited,” Jack, a prospective political science major, said. “I was like, ‘I better take this tour because if I committed and I hate the campus, that’s going to be a problem.’”

When he actually went on the tour three weeks later on April 9, Jack said it was enjoyable even though he couldn’t go inside buildings due to COVID-19 safety precautions.

“I thought the tour was great. It’s a beautiful campus, and the City was awesome,” Jack said. “I knew that we weren’t going to be able to go into all the buildings due to COVID safety measures, but I still feel like we got a really good look at the campus.”

Pitt Pathfinders is the group of student tour guides who help recruit prospective undergraduate students. Pathfinders typically host 90,000 visitors a year on campus — a number that has dramatically decreased after they were forced to cancel in-person tours due to the COVID-19 pandemic. Molly Swagler, assistant vice provost for enrollment and executive director of enrollment outreach at the Office of Admissions and Financial Aid, said OAFA had been anticipating the start of in-person tours this semester, and Pathfinders received the green light to begin in-person tours starting March 15.

In just one month, they’ve hosted 3,350 visitors, according to Heather Hoffman, OAFA’s director of visitor engagement and the Pathfinders adviser. The 1,648 prospective students from out of state made up about 47% of these visitors, as of last Thursday. These tours are a modified version of pre-COVID tours, with changes to tour routes and size.

But not everyone — especially current students — is happy about in-person tours beginning again due to safety concerns. One Reddit thread of students frustrated about the tours contains many current and prospective Panthers, with a common complaint being the apparent contradiction of putting current students under shelter-in-place while allowing thousands of visitors on campus.

Swagler said OAFA was unaware that the University would institute a shelter-in-place on March 31, just two weeks after the start of in-person tours.

“We’re not part of those conversations. For building a tour, we have to wait to build an area activity plan, which then has to go and get approved from the provost,” Swagler said. “So we build the plan out for each of those three postures that the University is in.”

De’Jovia Davis, vice president of Pitt Pathfinders, said current guidelines aim to keep visitors from interacting with Pitt’s general population. She added that the tours now have a maximum capacity of 10 people and one Pathfinder, and tours leave Alumni Hall every 15 minutes.

“The biggest change is that we’re trying not to go into buildings as much because we know that the regular student population is still studying and moving through different buildings,” Davis, a junior psychology and urban studies double major, said. “We’re able to guide them through campus, we still talk about the same things, like the dining plans and student life, so they’re still getting the same information.”

According to Swagler, these guidelines come from higher administration, particularly the Resilience Steering Committee, which is in charge of ensuring compliance with the University’s COVID-19 guidance and standards. For example, she said the RSC only permitted Pathfinders to walk through the Cathedral of Learning and visit no other buildings.

“From the start, we asked them who feels comfortable giving in-person tours, and it was by no means required of them,” Hoffman said. “There’s other ways for you to still have hours, to make money and to be part of the organization and get to do what Pathfinders do best — connect with our students and families.”

One of the virtual Pathfinders is a student who asked to remain anonymous due to fear of retaliation by the University. C., a Pathfinder since their first year, has been giving virtual tours through the pandemic and doesn’t think it made sense for in-person tours to resume because it poses a health risk.

Hoffman said OAFA has established rules requiring all visitors to mask up and complete a registration questionnaire, as well as mandating that all visitors of admitted students must be from the student’s household. But C. does not believe the regulations properly contain the risk of a daily influx of visitors.

“[OAFA] can say, ‘We’re making them social distance, we’re asking them if they had a fever in the past week.’ They can say they’re being safe, but they can’t control these families that they’re bringing onto campus,” C. said. “They can’t control where they go or what they do or if they wear a mask on the sidewalk.”

Swagler said unmasked visitors or visitors violating safety guidelines in the Oakland community is something that’s out of the University’s control.

“There are people who are not [part of Pathfinder tours], and they are coming for a self-guided tour or they’re a graduate student,” Swagler said. “They are not getting the extensive amount of communication and registration form that we require.”

Those who do register for a tour, though, are given “multiple communications” about COVID-19 safety guidelines, according to Hoffman.

“I text every single student who’s coming the day before their visit alerting them that we’re in shelter-in-place and reminding them of all the ‘mask up, back up and wash up,’” Hoffman said. “They are given ample information, but the others, we don’t have control over who they are, what they’re doing.”

Since the start of in-person tours, many students have expressed concerns about safety. All Pathfinders were notified in an email last Wednesday that a Pathfinder had received a positive COVID-19 test last week. The Pathfinder had conducted their last tour on April 9. Pitt’s Environmental Health and Safety Office said “there was no exposure to students, families and staff because we wear and require masks, practice social distancing and good hand hygiene.”

Nick Reffuge, a Pathfinders adviser, said in the email that Pathfinders can reach out to advisers if they wanted to “learn more about how your paths may have crossed” if they conducted tours between April 7-9.

A week later on Monday, all Pathfinders were notified by email that a family that visited campus last Friday and who took their tour around 2:45 p.m. tested positive for COVID-19. Reffuge said while all Pathfinders who worked during and around that time were notified, Pitt determined that “due to the safety protocols OAFA had in place, guests/staff/students were not considered in direct contact and therefore not at a risk level necessary for notification and contact tracing.”

still believes the tours are an even larger problem since the CMRO warned students last month that it had detected the COVID-19 variant first found in the U.K., B.1.1.7, on campus.

“[OAFA is] just inviting all of these people onto campus, when clearly the CMRO updates are like, ‘Hey guys, there’s a big problem,’” C. said. “We have the British variant on campus, and they only care about South Oakland parties, and they don’t care about the stuff that’s making the University money.”

Zwick said Pathfinders are student workers, so they are allowed to work during the shelter-in-place period. Zwick added that visitors were already traveling to campus before Pitt offered official Pathfinder tours again, so Pitt is “proactively managing” the number of visitors.

“By putting a process for tours in place, including limiting guests, health checks and consistent reminders regarding Pitt’s health rules, the Office of Admissions and Financial Aid is proactively managing visitors,” Zwick said.

Kiera Dickey, a junior marketing and business information systems major, said she’s also worried that some current Pitt students are unaware that the tours are happening. Dickey said while she saw tours around campus a couple of times, she wasn’t sure whether they were official Pathfinders tours, until she recognized the matching backpacks that students receive on the tours.

Dickey said she is frustrated and thinks the University doesn’t prioritize students who are on campus in its effort to reopen services.

“We pay thousands of dollars in tuition, and we’re not allowed to go to class or eat lunch with a friend in the dining hall,” Dickey said. “And then these kids who don’t go here yet, who aren’t paying their tuition yet, are getting a little vacation when you’re not even supposed to be traveling.”

Dickey said it’s frustrating that these visitors could be coming from anywhere in the country.

“Who knows where these kids are from? It could be from out of state, and they traveled and have taken planes to get here,” Dickey said. “They want us as students to stop the spread when they’re bringing in people that — who knows where they’re coming from or what the cases are like in the places where they’re from — were on the train or bus. There’s just so much risk involved in that, but it seems like the faculty, the chancellor, the dean are just putting the blame on us.”

Newly hired Pathfinder Andie Credidio has been giving in-person tours. She said one of the greatest strengths of the Pathfinders is their ability to easily adapt.

“I would say we had less than a month to get ready for in-person tours, but we did really well with adjusting,” Credidio, a sophomore psychology and communications major, said. “Some of the older Pathfinders would reevaluate us on our in-person tours.”
Credidio said she believes hosting these tours are “necessary” due to the influence tours play in students’ college decisions.

“I was in their position. And the fact that you couldn’t see campus … I mean one of the biggest reasons I came to Pitt was because the campus was so welcoming,” Credidio said. “Not being able to see that must really hurt, so I definitely think it’s necessary.”

Credidio added that virtual tours didn’t seem to have the same impact on students.

“A lot of the students, although they were welcomed to keep their cameras on, many of them didn’t — like what we do in Zoom classes — but you know there weren’t a lot of questions,” Credidio said. “A lot of parents have questions, and they weren’t really accessible over the Zoom tours.”

But current students aren’t sure if the safety risks outweigh the benefits. In fact, Dickey said she thinks the University is “scapegoating” their actions.

This story was updated to include information about COVID-19 cases related to Pathfinders.