Spilling the Beans | Can you cook beans in the microwave?

Spilling the Beans is an occasional blog written by contributing editor Leah Mensch about all things bean-related. 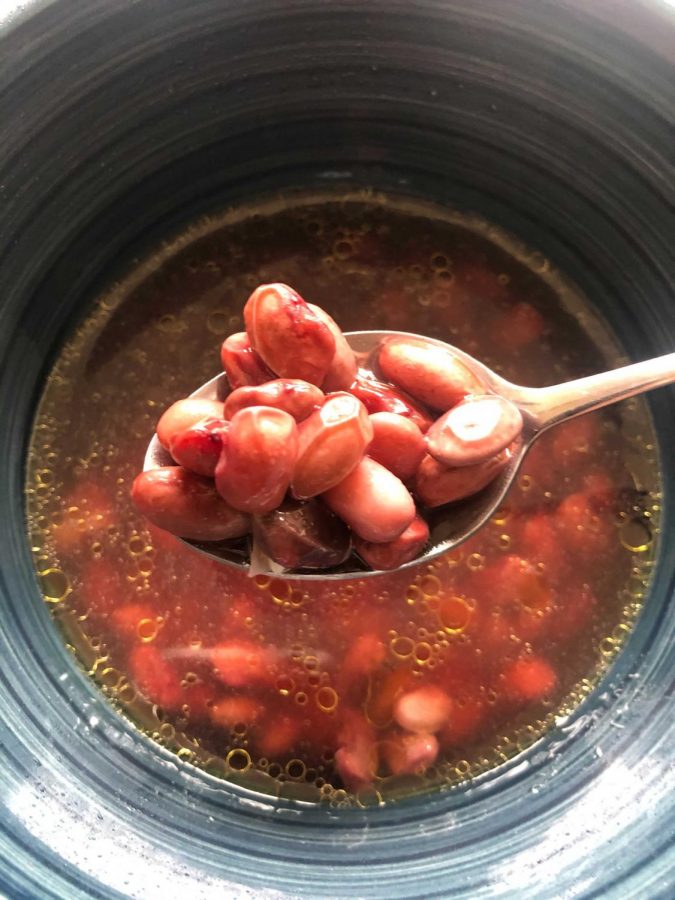 I am a reluctantly proud Los Angeles Times subscriber because I am writing a very big essay about a dead writer who lived in Los Angeles, and therefore, I need access to the archives. I am an openly proud bean blogger, and so when I stumbled across an LA Times article which claimed beans — as in dried beans — could be cooked in the microwave, I was suspicious, but admittedly intrigued.

For full disclosure, I am an English writing and English literature major, and I haven’t conducted a science experiment since chemistry class in the 10th grade — or something like that. This is a photo of me at age 15 making something that — I’m going to go out on a limb and guess — didn’t turn out right.

This is all to say, the margin of error is probably hovering around 70% here, so don’t take my results too seriously. I would say don’t try this at home, but maybe you should.

The concept of a microwave kind of scares me. I simply don’t understand how something invented in 1946, that plugs into a wall and doesn’t have any sort of open flame, can make my coffee boil in a matter of minutes. When I was in elementary school, people kept talking about how grapes catch on fire in the microwave. This makes no sense, and I don’t care what explanation science offers. I don’t get how this thing heats food.

I also don’t care what gamma rays and the electromagnetic spectrum are, which are apparently related to the microwave function — I think I recall learning this in chemistry, so that probably went very, very well. This graphic puts microwaves on the same spectrum as x-rays and radio waves, which further proves my point that microwaves are freaky mechanisms.

But my mother taught me to face my fears head on, for which I am grateful. And when you love something — I love beans, if you haven’t yet put it together — you make sacrifices. I am courageously using the microwave. I am doing so candidly, writing this blog over a number of hours as I go, so come along on this adventure with me.

First, I soaked the beans. I am once again asking — for the last time — that you do NOT skip soaking the beans. They will cook unevenly — I feel like they’re gonna cook unevenly because I’m using the microwave anyway — and so if you don’t soak them for at least eight hours, it’s going to result in something far worse. I used about 1/8 cup of dried beans because I buy my beans from a wholesale website and they’re rather expensive, and I just received my last Pitt News paycheck, and will therefore be unemployed until I start graduate school in September.

The LA Times recommends I add a “chunk of salt pork” or “bacon drippings” to the beans while I am cooking them in the microwave, in order to help “keep the beans from boiling over.” I’m Jewish so I don’t just conveniently have bacon drippings lying around, though I doubt anyone in 2021 has bacon drippings lying around. I also have no idea what “chunk of salt pork” means. Is this different from “chunk of unsalted pork”? I’m just adding olive oil because that’s what I have, and I usually put it in my beans anyway.

Next, I learn that I am supposed to use a “4- to 5-quart casserole” in the microwave. What is that you may ask? I had to Google it, and apparently it looks like a crockpot and a dutch oven had a child. I am not Martha Stewart. I do not have one of these lying around. Until three months ago, I only had one mixing bowl, and I was drinking wine out of a coffee mug because I didn’t have a wine glass. I am using a stoneware bowl from Target, but I need to find a way to cover it, and I can’t use tinfoil because my mother’s microwave 101 educated me. NO TINFOIL IN THE MICROWAVE. I am using this random food cover that my mother bought for the house from Bed Bath & Beyond for $5. I don’t think the beans will boil over because I used so few.

I am advised not to salt the beans before cooking them because they could dry out. I think that’s bull—-, but whatever. I am going to follow the directions. Now, I microwave them for seven to 10 minutes at 100% power. I’m only going to do four to five minutes because I didn’t use a full cup of dried beans.

The beans did not boil over, and now, I have to cook the beans at “50% power” for 35 to 55 minutes, and stir every 15 minutes. I’m starting with 15 minutes because, again, I used very few beans. I also had to look up how to change a microwave to 50% power. This seems stupid to me. Why wouldn’t I just cook the beans for seven minutes instead? Isn’t that the same thing?

It’s also occurring to me that a pot of beans takes me about 45 to 50 minutes to cook anyway — as you can see in my other recipes — so why am I even doing this? The LA Times said, “Although the microwave can’t cook dried beans instantly, it does beat conventional cooking time by about 50%.” I’m pretty sure this is fake news. But I’m already too invested.

After 15 minutes, I remove the beans and stir them. They’re getting there, but aren’t done yet, so I put them in for another 15 minutes. This time, they’re “done.” By which I mean, some of the beans are perfectly tender, and others are wrinkly and hard.

When I told my bean-czar friend that I was cooking beans in the microwave, they had a look on their face that only could only be described as terror and disappointment. “That isn’t gonna work,” they said. I digress. Overall, this was a huge waste of time. I suppose the LA Times is correct in that it’s possible to cook beans in the microwave, but if I’ve learned one thing in all 21 years of my life it’s that just because you can do something doesn’t mean you should. I probably could have evened out the texture of the beans if I kept them in the microwave longer, but like I said, microwaves scare me, so I just put them on the stove for 15 minutes and ate them with salt and rice.

The LA Times offered a burrito recipe to end the microwave manifesto, but I recommend you use mine, considering that the LA Times now does not have the best bean track record. Have at it. If you try the microwave method and it works, email me. Please, email me. It’s been a pleasure.

This is the last thing I’ll ever write for The Pitt News. I was going to end my tenure with a column about how college students deserve better suicide prevention resources — because they do. And I’m sure I’ll write about this another time, in one way or another. But I want to go out on a note of silliness.

A few months ago, I asked the students in the class for which I was the UTA to write about the most beautiful thing they’ve ever seen. The truth is, I survived undergrad mostly by indulging in the beautiful absurdity of life. Through being silly — wearing flippers and a snorkel in the newspaper office and swinging on a swing set in the middle of the South Side Slopes. Through jumping into the Monongahela on a hot day, climbing mulberry trees and yes, trying to cook beans in the microwave. So is it a stretch to say beans are one of the most beautiful things I’ve ever seen?

Leah Mensch is the outgoing TPN staff bean czar, but you should still write to them about beans. Write to them at [email protected].