Review: ‘The Falcon and the Winter Soldier’ soars triumphantly into final episode 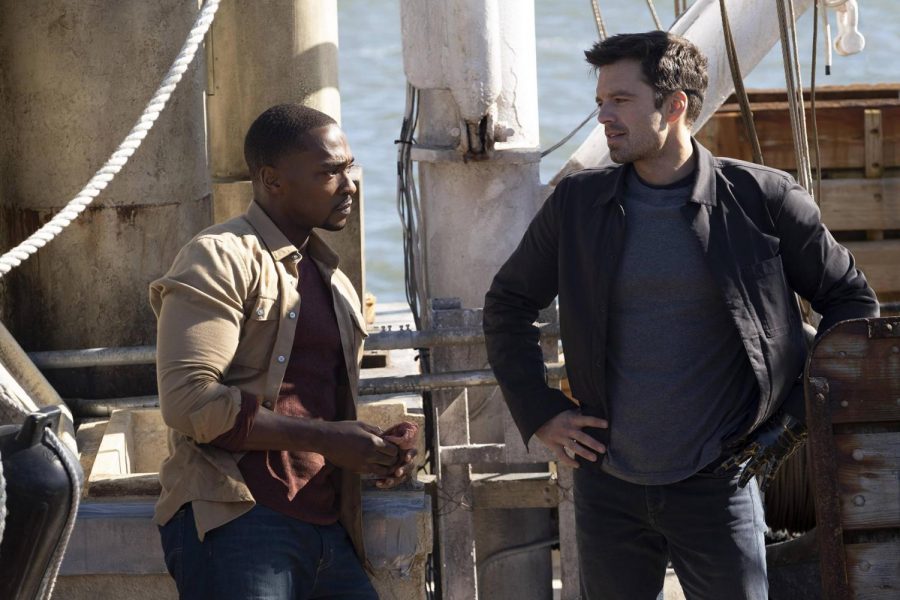 Disney+'s “The Falcon and the Winter Soldier” with Anthony Mackie, left, and Sebastian Stan.

When it comes to Captain America and company, I will admit that I am extremely biased.

Captain America was my first tried and true die-hard fandom experience, and I was deeply invested in the well-being of Steve Rogers and his friends. On the premiere night of “Avengers: Endgame,” I cried so hard at Steve’s departure that my best friend thought I was having a panic attack.

So when Disney+ announced the series “The Falcon and the Winter Soldier,” featuring Sam Wilson (Anthony Mackie) and Bucky Barnes (Sebastian Stan), I was ecstatic to say the least. I expected great things.

And so far I think the series has delivered on 90% of my well-founded expectations, with a few hiccups here and there from the show, and sadly the fans. But with the mini-series concluding Friday with its sixth episode, I can say it was a positive experience overall.

Initially, the show was meant to air last August, but was delayed after production stopped in the Czech Republic because of COVID-19. “WandaVision,” one of Disney+’s other MCU slated shows following Wanda Maximoff (Elizabeth Olsen), aired first instead, in January, to critical and audience acclaim.

How has “TFATWS,” as the show is often abbreviated, been competing on the red-hot heels of the Scarlet Witch?

Well, it’s a very different show. “TFATWS” focuses on the lives of Sam Wilson and Bucky Barnes about six months or so after the events of “Avengers: Endgame,” the MCU’s grand finale for Phase 3. In the movie, Steve Rogers (Chris Evans), the original Captain America, went back in time to live a full life with one Peggy Carter and returned to the present as an old man, very much eager to pass off the shield to Sam.

Now, the controversy around Steve’s ending aside, this did set up what comic books fans have long known was canon. Sam Wilson is the new Captain America.

But maybe Sam doesn’t want to be Captain America. Being a Black man holding the shield of a country that to this day puts Black people’s lives at the very lowest of its priorities is a tough responsibility to tackle. And in the first episode of the show, it seems that Sam doesn’t want to take on the mantle.

He donates the shield to the government, under the assumption that it will be held in a museum for his dearly departed friend, then continues to perform freelance work for the military under the Falcon moniker.

Bucky, who in six month’s time has been pardoned by the United States for his previous crimes and has been spending his days ignoring his PTSD, is not happy at all with Sam’s decision. Especially when, surprise surprise, the government goes back on its promise to keep the shield under wraps and instead gives it to a shiny new Captain America — a dutiful soldier named John Walker (Wyatt Russell) who holds a dim and flickering candle to Rogers’ legacy.

But this isn’t all that Sam and Bucky have to deal with. While the government is playing hot potato with the shield, a renegade rebel group called the Flag Smashers is stirring up trouble overseas.

Lead by one Karli Morgenthau (Erin Kellyman), the Flag Smashers want the world to return to the way it was in the five years after Thanos initiated “The Snap” in “Avengers: Infinity War,” where half the world’s population was killed off, and the Earth had to band together despite past grievances in order to survive.

Sam and Bucky spend most of episodes two through four tracking down the Flag Smashers and trying to convince them to see reason. But Walker is hot on their trail, and his methods are less “let’s talk things out” and more like, spoiler alert, “let’s decapitate some guy in the middle of the street.”

There’s no doubt in my mind that Wilson will be toting the shield and the mantle of Cap by the end of today’s episode, with a supportive Bucky by his side who has now seen two of his best friends hold it.

Isaiah Bradley (Carl Lumbly), a more obscure comic-book character, was introduced in episode two of the series. He’s a Black supersoldier, created around the same time as Steve was, yet he was given the serum against his will. After he used his powers to free members of his army unit from imprisonment, the U.S. government captured Isaiah and tortured him for over thirty years.

In a small and devastating parallel, Steve did the exact same thing in the first Captain America movie, “Captain America: The First Avenger.” He freed his fellow soldiers from a Nazi prison camp, and he was awarded for it. When Isaiah did the same thing, he was thrown in a hole, and left to rot.

So far, the best episodes of the series have been four and five. Episode four came with some top-notch action, some great character moments for Bucky, and an ending that had me screaming on Twitter with thousands of other fans for hours.

But it’s episode five that has the best scene so far, and I’d bet the best one in the series.

Sam goes to visit Isaiah again by himself, after episode two’s disastrous first meeting, and speaks with him one-on-one. Isaiah describes the years of his torture, his wife who died before he was released and the lingering, rightful bitterness he has for the country.

“They will never let a Black man be Captain America. And even if they did, no self-respecting Black man would ever wanna be,” he says to Sam.

He has a point — after all that the country has done to him, his friends, his wife and every Black person in the United States why should anyone do anything in the government’s name, wearing American colors?

It’s an especially poignant thought nowadays, after the Derek Chauvin trial and the killing of Ma’Khia Bryant this past Tuesday in Columbus, Ohio, by police. And for anyone who has interacted in fandom spaces, you can’t escape problems and tendencies stirred up by racist fans either.

Marvel Twitter was in a small firestorm after the fourth episode’s release on April 3, as many fans flocked to attack Ayo (Florence Kasumba), a Black woman from the Wakandan elite squad of warrior women the Dora Milaje, for temporarily taking Bucky’s prosthetic arm away mid-battle.

There was a lot of hate thrown her way that was clearly racially tinged — despite the fact that she did leave the arm for him to put back on once the fight was over, and Bucky can take care of himself without it.

The Marvel fandom is by no means free from problems. People have often been faced with misogynistic and racist remarks. After every episode, I always find someone on Twitter with a “hot” take that’s actually just a “bigoted” take.

This is the America Sam Wilson has to decide if he wants to fight for.

But in episode five, Sam holds up the shield to his nephew at the old Wilson family house in Delacroix, Louisiana. And the look on his nephew’s face, seeing his uncle hold the shield — well, there aren’t any words needed for the admiration there.

Sam can make a legacy of his own, in the face of all his nay-sayers, with his wings to the sky and Bucky at his side.