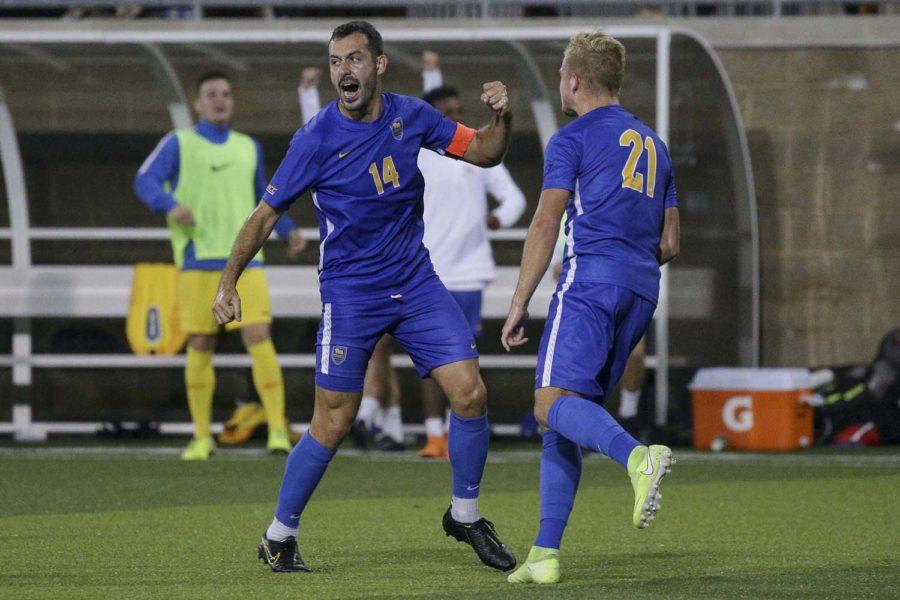 For the second consecutive season, Pitt men’s soccer is headed to the NCAA tournament. The Panthers earned the No. 2 overall seed in the bracket, and will face the winner of Monmouth and Bowling Green in their first match on May 2.

For the second consecutive season, Pitt men’s soccer is headed to the NCAA tournament. The Panthers earned the No. 2 overall seed in the bracket, and will face the winner of Monmouth and Bowling Green in their first match on May 2.

Pitt’s impressive draw as the second-seeded team in the field follows its most successful regular season in program history. Jay Vidovich led the Panthers to an overall record of 13-3 and an ACC Coastal Division title. Clemson, the No. 1 overall seed, stifled the Panthers from hoisting the ACC championship trophy in the fall and earning an automatic bid to the NCAA tournament in the spring, as the Tigers defeated Pitt in both of their matchups during the season.

While the Panthers may have lost their opportunity to clinch an automatic bid, their NCAA tournament status never looked in question. The ACC is widely considered the most elite soccer conference in the nation, and Pitt finished with the best record amongst the conference.

Luckily for the Panthers, they are not in line to face any familiar teams until at least the national semifinals. Five ACC teams were selected to play in the tournament, and Pitt does not share a region with any of them. But several formidable opponents round out Pitt’s quadrant of the bracket.

Pitt’s largest threat prior to the semifinals is the No. 7 Washington Huskies, who finished the regular season with a record of 10-3. While the ACC played a fall and spring portion of the season, the PAC-12 postponed all fall sports through the 2020 calendar year, and the Huskies therefore did not play their first match until Feb. 4.

The delay in the start of Washington’s season could impact its performance in several ways. Most of all, the Huskies have not had nearly as much time to develop and grow as a team. Several first-year Pitt players, such as forward Luke Peperak and midfielder Luke Mort, hardly played at all during the fall, but have emerged as key bench contributors in the spring. Washington’s lack of time to develop in this sense could impact its chances in a potential matchup with Pitt.

But this matchup could easily never occur. Presently, the Panthers must focus on preparing for either Monmouth or Bowling Green. Much like Washington, neither of these schools could begin their season until the second semester, with Bowling Green commencing play on Feb. 19 and Monmouth much later on, with its first match taking place on March 18.

Monmouth is certainly a Cinderella story, as the Hawks entered the MAAC tournament with a record of just 2-2-1 and came out victorious, defeating the top three seeded teams in the conference as the No. 6 seed. While the NCAA only officially seeds eight teams in the tournament, Monmouth would certainly be one of the lowest seeds in the field if assigned a ranking.

But the Hawks have gotten hot at the right time, and so has Bowling Green. The Falcons are 5-1-1 since March 14, and sport an overall record of 7-4-1. Bowling Green completed four more official matches than Monmouth, which could once again play a role in their chemistry and fitness.

The Panthers will most likely hope to see Monmouth in their first match, but should not have much of a problem regardless of the opponent. Pitt would then play the winner of a match between another pair of mid-major schools in Central Florida and James Madison. Its first match against a power conference team would come no earlier than the regional final, when the Panthers could potentially face Washington or Maryland.

If the top-seeded teams perform as expected, Pitt’s most likely opponent in the national semifinal would be No. 3 Indiana, and the Panthers could potentially face Clemson for a third time this season in the national championship. While the Tigers seem to have Pitt’s number to this point, anything can happen in a single-elimination tournament.

In tournaments of this nature, teams must take everything one game at a time. While the Panthers received a favorable draw and a realistic path to the national championship game, their No. 2 overall seed will not be enough in itself to get them there. Pitt will look to demonstrate how they earned that ranking in nine days.