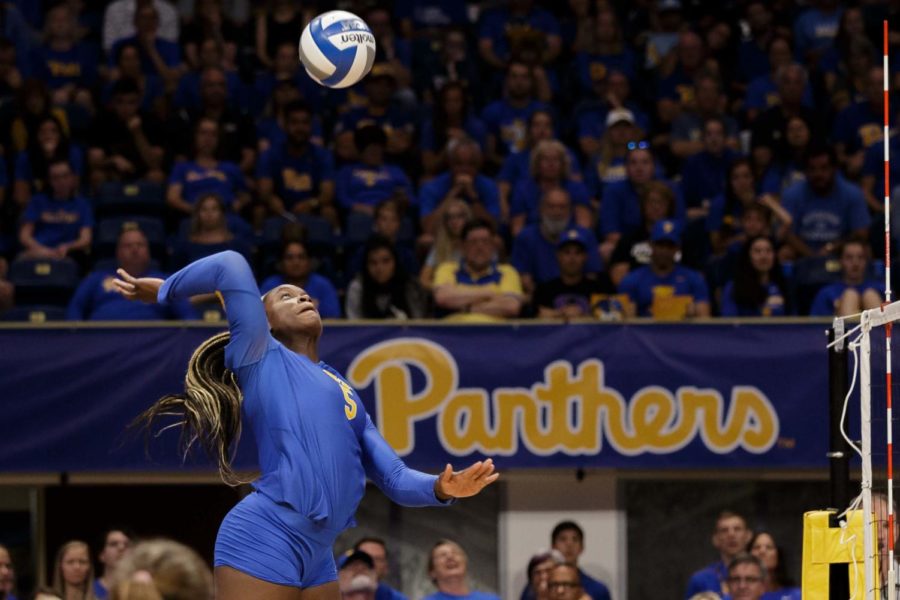 Pitt senior right side hitter Chinaza Ndee reflected on the path that led her to this moment in front of reporters at a Zoom press conference last week. The team captain had just posted a 17-kill performance, boosting her team to a straight-set win over No. 14 Utah to advance to the NCAA Sweet Sixteen.

Sitting in front of reporters at a Zoom press conference last week, Pitt senior right side hitter Chinaza Ndee took a deep breath as she reflected on the path that led her to this moment. The team captain had just posted a 17-kill performance, boosting her team to a straight-set win over No. 14 Utah to advance to the NCAA Sweet Sixteen.

The program has certainly seen quite a transformation since the Houston native made her college decision on the first day of her junior year of high school. At that time, Pitt volleyball head coach Dan Fisher was preparing to start his third season at the helm, hoping to bring the team to the NCAA tournament for the first time since 2004.

But that day, Ndee and her teammates had just celebrated Pitt volleyball’s first-ever win in the NCAA tournament’s second round. The team would shock No. 3 Minnesota just a few days later, extending the Panthers’ historic run. Ndee said she couldn’t have foreseen her dominant performance at the biggest stage in program history, but she never dismissed it.

“I knew it was possible,” she said. “But I definitely couldn’t have imagined this. I knew the program was on the rise and I knew kind of where we could go, but I never could have anticipated this.”

If you had travelled even further back in Ndee’s athletic career, you’d find a time where volleyball didn’t even stand as her go-to sport. Basketball was her first love, and she only saw volleyball as a casually fun activity in the offseason. That didn’t change until one of her American Athletic Union teammates convinced her to come to a club volleyball tryout in middle school.

Ndee said her physical talents shined at the tryout, but felt “lost” when it came to actual gameplay. Still, she made the team and had a lot of fun. The sport now had her attention, and she realized when she got to high school that her future might involve spiking volleyballs instead of dribbling basketballs.

“When I first, first, first started playing volleyball, I was like ‘Oh, this is interesting,’ and I’m just trying to figure everything out,” Ndee said. “And then I started getting interest from colleges, and I was like ‘whoa,’ I didn’t know that was a thing I could do. The college thing didn’t really come in until I’d really gotten more into the sport.”

Ndee’s younger sister Onuchi, a middle hitter for American University, also played basketball with Chinaza growing up, before shifting her attention to volleyball. She realized how much the sport meant to her older sister when she sensed a different level of commitment.

“I think it was that love for the game that signaled to me that this was what she wanted to play long term,” Onuchi said. “If you know Chinaza, she is the worst at making up her mind, so the fact that she has stuck to this sport for so long means a lot.”

Ndee popped onto Fisher’s radar very early, with his staff reaching out to her while she was in eighth grade. Fisher said she came off very “shy” over the phone, but she kept consistent contact with Pitt as she narrowed her recruitment down from over 50 interested schools. Fisher recognized her talents would fit well into the team’s rise up the volleyball ranks.

“I just saw her able to jump and hit hard,” Fisher said. “She was high enough and hard enough and she had some range too, she could hit more than one shot. That was pretty much it, we knew immediately she had what it took physically to help.”

Although Onuchi said she thinks she’s helped the mental aspect of Chinaza’s game more than her fitness level, she does take credit for her sister’s leaping abilities.

“I’m the reason her vert is so high,” the younger Ndee said. “Don’t let her tell you otherwise.”

Ndee said she couldn’t get over the frigid Pittsburgh winters for much of the recruiting process, making her question if she could really see herself going to school there. She finally went on her visit to Oakland on a particularly cold and rainy day. Despite the conditions, she had a blast. Her decision came down to Pitt and volleyball powerhouse Stanford, but the Panthers had won her over.

“Pitt was just the school that checks all the boxes for me,” Ndee said. “I like the campus, I like that it’s not in the middle of nowhere. I like that we’re in a city. I like the school, academics is important to me. I liked that I didn’t have to compromise with being able to do what I wanted to do academically while being able to play high-level volleyball.”

Ndee grew comfortable with her new environment very quickly when she arrived for her first year at Pitt. She made friends with fellow athletes in Sutherland Hall, and she slowly began to explore many areas of Pittsburgh she’d never seen before.

As the only members of the Panthers’ 2017 recruiting class, Ndee and outside hitter Kayla Lund immediately formed a tight-knit bond that would last their entire careers. This week, Lund and Ndee became the first-ever Pitt volleyball duo named to the AVCA All-America Second Team in the same season.

Ndee also received a bit of mentorship from veteran libero Hanna Markewycz. The junior shared a common interest with Ndee that helped build a strong connection — medicine. Ndee always liked the idea of becoming a doctor, but a three-week shadowing opportunity at Houston Methodist Hospital her senior year of high school cemented her career track.

“I had always said I wanted to be a doctor, and then I walked into that environment and saw all the different paths you can take and just the kind of people that are doctors,” Ndee said. “I think that was the moment it kind of solidified for me, I know I actually want to do this.”

As a double major in natural sciences and psychology, Ndee has remained committed to medical school further down the road. She’s also gotten experience outside of the classroom, assisting with research for the Pitt Parents and Children Laboratory, and shadowing esteemed doctors at UPMC and Texas Children’s Pediatrics.
Her medical school dreams became closer to reality with recent financial help from the Atlantic Coast Conference. The ACC selects 52 athletes across the conference each year for its Postgraduate Scholarship Award, which Lund and Ndee both received this year. Ndee plans to use that scholarship towards med school, but doesn’t know where she will attend.

On the court, Ndee said she had to face a bit of a learning curve upon her arrival. She started immediately at middle blocker, but slowly began shifting more to the right side as her career went on. She said the greatest challenge was the jump in competition and intensity from high school to college.

As she progressed as a player, Ndee’s role on the team became increasingly more focused on leadership. That responsibility became the most crucial last summer, amidst the worldwide outrage in response to George Floyd’s murder. As an incoming co-captain that year, and one of a few Black players on the team, Ndee led the discussion in the immediate aftermath.

She said Fisher reached out to her soon after Floyd’s death, and the two agreed that the team had to address it together. The players and staff held a meeting soon after, allowing team members to voice their thoughts at length.

“It was important for us to acknowledge that people on the team were hurting,” she said. “I think that’s where we started from, like ‘Hey, these are your teammates, they’re hurting. This is a chance for you to listen to them … listen to their perspectives.’”

As a team, the Panthers continued to bring up these issues throughout their conversations, watched educational content and even began reading books together on the subject. Not wanting to sweep the topic under the rug when the summer concluded, the team elected to kneel during the national anthem for every match in both the fall and the spring, Ndee and Fisher said.

Ndee said she had considered kneeling to protest in previous years, but always felt too “nervous” of potential backlash or negative attention. That change represents a growth in her personality in person and on her social media accounts, becoming much more vocal about the issues she’s always felt passionate about. She said with the platform she possesses as an athlete, the time had come for her to conquer her apprehensions.

“It is definitely nervewracking, though, for sure,” Ndee said. “It’s definitely a journey, but I’m at the point in my life where I just know where my priorities lie and it’s fine if other people’s priorities don’t lie in the same area as mine do, but that’s just not something I’m willing to compromise on anymore, to be honest.”

At the same time, she’s tried to not fall into the trap of solely focusing on an online presence. Instead of simply reposting things, Ndee said she’s made an effort to further educate herself and make an impact on the Oakland community with her teammates.

As the team becomes increasingly closer off of the court through these discussions, education and community service, it has translated to success on the playing surface as well this year. Because of the COVID-19 pandemic, Ndee had no idea if her senior season would even occur. Instead, the team enjoyed its deepest postseason run in program history this spring.

While that would certainly appear like a strong way to go out, Pitt volleyball fans have not seen the last of this squad. Pitt announced on Friday that Lund and Ndee will indeed return for another season, granted by the NCAA’s blanket eligibility waiver to all fall sports athletes. Ndee said she made her decision before this season began, but the team’s recent run strengthened her confidence even more.

“I wasn’t sure how this season was going to pan out and I wasn’t prepared for my time at Pitt to end,” she said. “I just wasn’t ready to go. Also, I am not currently considering a professional volleyball career, so I wanted to make the most of my time playing the sport at such a high level. After I found a way to make it work academically, I decided to stay for the next season.”

Since the two teammates arrived at Pitt, the Panthers have won three ACC championships, racked up individual accolades and come one set away from a final four appearance. With the pair back next year, Ndee hopes to take the program to even greater heights.

“We have a lot of talented players coming in next season as well, so I’m looking forward to playing with them and seeing how they contribute to our program,” she said. “This team has meant so much to me over the past four years, so any chance to make even more memories is a blessing.”