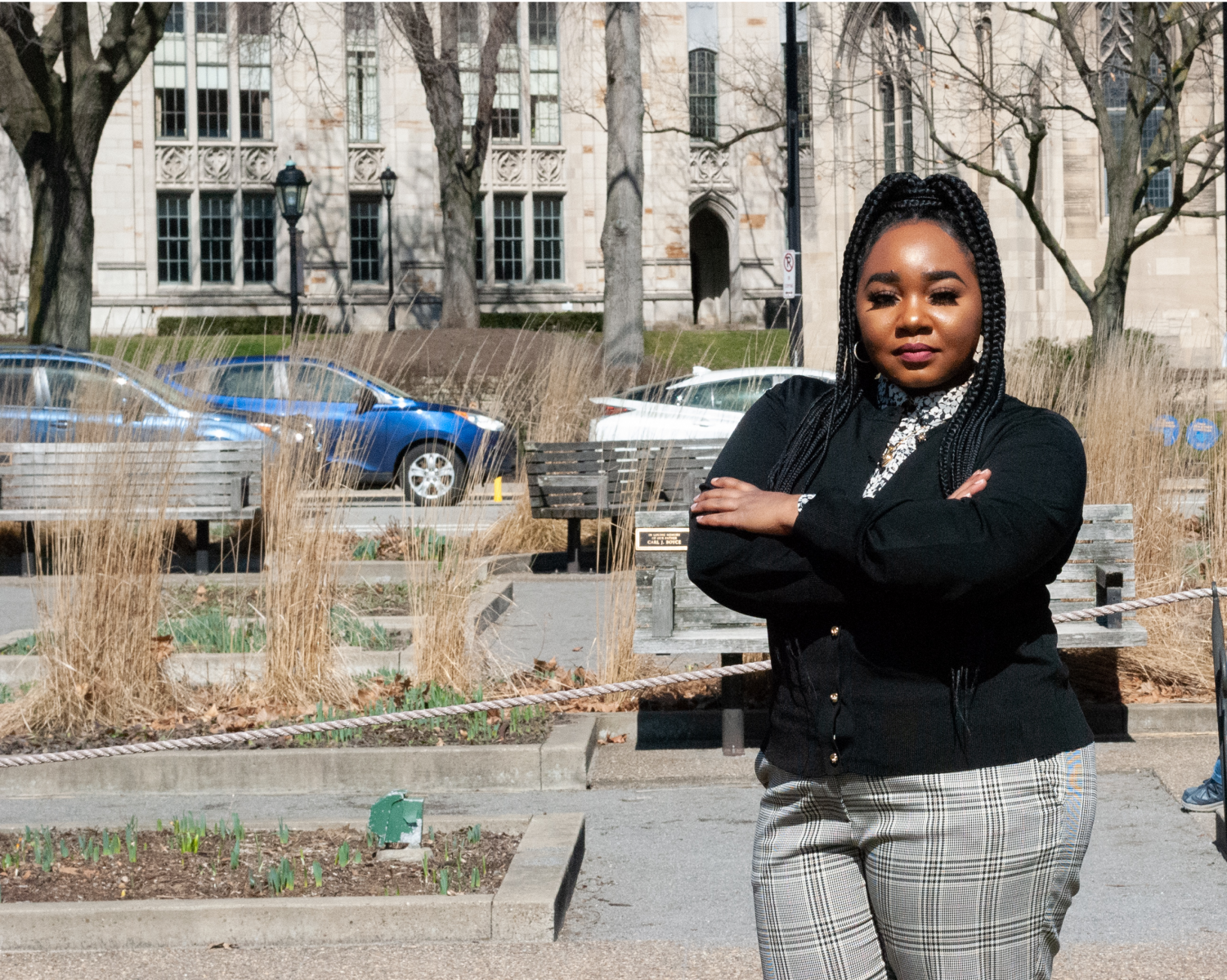 For Ray Nell Jones, helping people is a lifestyle — it’s what she does. Instead of letting her hardships define her, Jones channeled her courage and dedication into the creation of her very own nonprofit organization.

“When you ride a roller coaster, you wanna keep doing it over and over again, so that’s just me,” Jones said. “I get that adrenaline rush when I help people.”

Jones founded and currently operates The Allignment Chapter, which donates boxes of basic necessities — such as household items, feminine products, baby formula and baby wipes — to low-income single mothers and families in need in 29 states. Jones said when it comes to her nonprofit, she “operates off experience.”

“I’ve felt it, I’ve seen it all, I’ve dealt with it all, I’ve conquered it all and I cannot put my work out and help other women if I have never gone through it,” Jones said.

Becoming a single mom at 19 years old, attending college at Point Park University and working at UPMC Montefiore as a housekeeper, Jones recalled the difficulties she had managing her new schedule, often dropping her daughter off at the babysitter’s at 7 a.m. and not having the opportunity to pick her up until midnight. Jones said at the time, being “financially illiterate,” living paycheck to paycheck and never practicing self-care left her in a deteriorating mental state.

“Those are the things that I remember, being a first-time mom and not really spending enough time with my child because I was trying to go to school and work at the same time,” Jones said. “And I just feel like I was mentally declining.”

Jones said she started to reconsider the importance of her role in her daughter’s life, asking herself, “Is she better off without me?” and, “Am I a good mom?” Jones said she struggled with the thoughts of not caring to be a mom or caring for herself anymore.

During this time, Jones said she started couponing, which left her with hoards of household products such as toilet paper, diapers and formula in her house. Jones said she had the means to help others in similar situations as her, and started putting these items in bags and taking them to the bus stop with her to share them with the women in her community, which became the start of The Allignment Chapter.

“I remember the first time I did that,” Jones said. “How excited all of the moms were, and how many relationships I built from putting my baby in her harness and walking from bus stop to bus stop in my community.”

One relationship she built was with Ketura Brown, a single mother of four from Pittsburgh. Brown, who currently owns her own uniform business and works as a patient care technician at UPMC Presbyterian, said she received resources from The Allignment Chapter during a time of unemployment when she needed household items for her family.

Brown said after reaching out to The Allignment Chapter and working with Jones, they have been friends ever since. She said the organization is a great way to get household resources when “in a difficult time,” and she especially appreciates how she could reach out and get these resources without fear of judgment.

“Providing genuine help without judgment is something that The Allignment Chapter prides itself on — that alone has been a positive impact,” Brown said. “Knowing I can rely on Ray Nell, knowing I can trust her, relieves a lot of stress on me as a single mother.”

Jones not only has a positive reputation for her work at The Allignment Chapter, but also for her work at Pitt as administrative assistant in Student Affairs. Linda Williams-Moore, associate dean of students at Pitt and Jones’ boss, said after working with her for about three years, she can confidently say Jones is “the light of our office.” Williams-Moore said Jones can connect well with everyone who comes in, and always makes sure students’ needs are met.

“All walks of life come into our office,” Williams-Moore said. “And she’s able to connect with those individuals.”

Jones said she always wanted to start a nonprofit, but didn’t know how to make it happen financially. Getting denied from every grant she applied for, including the Pittsburgh Foundation Emergency Action Fund, did not make this process easier, but Jones said donations from the community have kept the organization alive.

Jones prides herself in being completely self-taught when it came to creating The Allignment Chapter in November 2019, as it has spread to 29 states through the help of social media and word of mouth. Jones runs everything out of her house, packaging and delivering the emergency care packages for 6,221 moms based on their responses to the organization's online form.

“I became the hero that I didn't have,” Jones said. “And that was always my main goal.”

Jones said the name “Allignment” coincides with the nonprofit’s mission of aligning women with their financial needs by not having them pay for household essentials and to help get “all women aligned with their purpose.”

She said her biggest inspirations are her two daughters, and she hopes The Allignment Chapter can ensure a better life for the ones she loves.

“It’s just things like that, where I want to build a large nonprofit where my kids don’t have to go through the things that I went through,” Jones said.

Not only has Jones’ work been recognized within the Pittsburgh community, but she received additional attention from Ellen DeGeneres, who featured Jones in the Mother’s Day special on “The Ellen DeGeneres Show” in May 2020. DeGeneres surprised Jones with a new Hyundai Santa Fe, as well as donations to the organization.

Jones said she is still in shock of the surreal experience on “The Ellen DeGeneres Show.” Since she had never owned a car before, Jones said this experience and gift from DeGeneres impacted her greatly.

“It was like a sigh of relief,” Jones said. “Because you do so much and you don’t look to get things given back to you.”

Williams-Moore said she thinks Jones’ work at the Allignment Chapter is “fantastic.” She said many people they work with in Student Affairs didn’t even know she was working on this project, which Williams-Moore said was a clear sign of Jones’ humility.

“She doesn’t do this work for people to recognize her,” Williams-Moore said. “She does it because she knows it’s important work.”

Williams-Moore said she loves working with Jones and thinks the work Jones does for single moms in the community is very noble.

“The work she’s doing in the community for single moms is to be commended,” Williams-Moore said. “She goes beyond herself and that’s what’s important.”

Jones has big plans for the future of The Allignment Chapter, starting with opening up the first warehouse as a “home base” to run the organization. Her dream is to one day own a big, pink, glittery box truck to travel in from state to state, delivering emergency packages to different communities.

“I’ve always wanted to go from community to community and do those gift boxes, and when people see me they’d be like, ‘They’re here!’ a sigh of relief like help is here,” Jones said. “So that’s what I see The Allignment Chapter doing in the future.”

“She’s practically taken on advocating for us, being our voice, by herself,” Brown said. “That alone is commendable — I see her taking The Allignment Chapter worldwide.”

Through The Allignment Chapter, Jones encourages women, no matter what situation they’re in, to “stay in the positive.” Jones leads as an example that poverty, homelessness or single motherhood is “not going to define who you are.”

Jones emphasizes that no one is just a statistic, and everyone deserves the opportunity to go wherever they want in life. One of her other biggest inspirations comes from sharing her story of all the women she’s helped and creating The Allignment Chapter out of it.

“That’s my biggest inspiration, helping so many moms, hearing so many stories, seeing so many lives changed,” Jones said. “The mindsets the biggest thing, once you change somebody’s mindset, you change their life.”